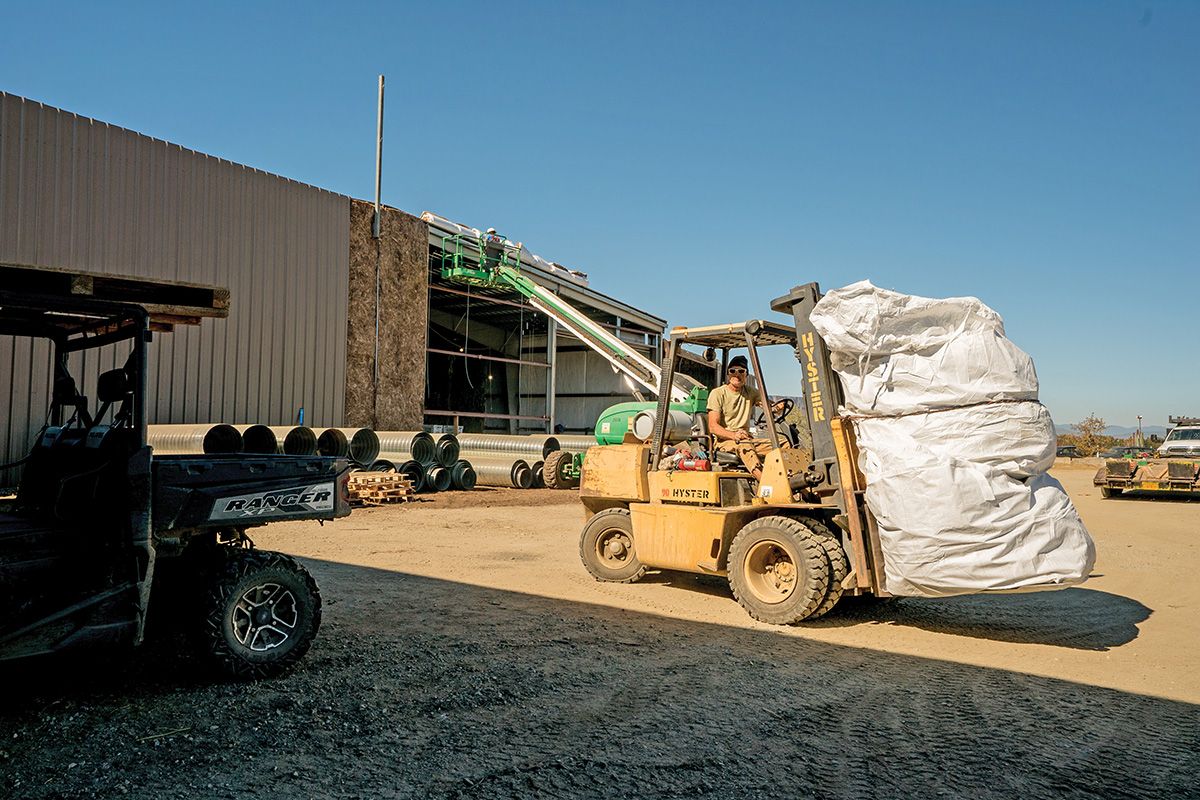 Storing hemp properly is arguably as important as planting, harvesting or any other step in the cultivation process, because it can be just as crucial to farmers looking to turn a profit.

Standard storage methods have been developed for hemp grain, seed and fiber, based on years of growing and processing, mostly in Canada. Still, those methods are subject to change—particularly now that the plant is legal in the United States and more farmers will likely grow it.

Until this year, storage of hemp flower and whole plant biomass has been relatively uncharted territory.

“This industry is so new that I don’t think anybody really knows how long this stuff will store yet,” said Scott Propheter, vice president of agronomy and outreach at Criticality, a North Carolina-based, vertically integrated hemp and CBD company.

Susceptible to humidity, temperature, ultraviolet light and weather, an improperly stored hemp crop can quickly go from good to bad under the untrained eye. When exposed to the elements, some of the more common issues farmers and processors face with hemp include mold problems or degradation in cannabinoid potency.

With an influx of farmers and businesses coming into the market—and new processors and manufacturers still learning how to work with hemp—the still-developing hemp-storage landscape is likely to become even more important.

And considering the uncertainty still looming based on the U.S. Food and Drug Administration’s future regulation of the use of CBD and other cannabinoids in food, beverages, dietary supplements and cosmetics, hemp businesses may need to hold on to product longer than anticipated.

Industry executives say there are two schools of thought when it comes to harvesting and storing hemp for CBD extraction:

John Cummings, president of Hemptown, a vertically integrated business that grows hemp outdoors in Colorado, Kentucky and Oregon, said his company works in both methods, typically cutting hemp flower off the top of field-grown hemp plants first, then harvesting the biomass with a combine. Both hemp flower and biomass are dried in an industrial dryer before being stored in large canvas sacks like those used for corn and wheat.

The sacks measure roughly 4 feet tall by 5 feet wide. And while the sacks will store up to 1,000 pounds of grain, Cummings said Hemptown doesn’t pack in hemp as tightly to allow for better airflow.

Criticality is approaching hemp postharvest and storage in a unique way that stems from its parent company’s tobacco-industry origins. Because it processes hemp flower and not whole-plant biomass for its Korent product line of hemp-derived CBD oil drops and e-liquid, Criticality uses the resources already in place at the network of tobacco farms where its hemp is produced across North Carolina.

Criticality’s Propheter said the process of drying down hemp is simpler, requiring less time and technique than curing tobacco.

The tobacco barns where hemp is stored are much like shipping containers, fitted with forced-air units to dry the moisture out of the plants. Each farm has as many as 20 barns, with each large enough to hold up to an acre’s worth of harvested plants.

Hemp plants are hung in the environmentally controlled tobacco barns, where it is dried uniformly for three to five days. While the process is similar to curing tobacco, it requires less time and technique because hemp is less dense and the flower, not tobacco leaves, is the end product. Once the plant is dry, removing floral material is easier than attempting this when the plant is freshly harvested.

“Being able to force air into that positive pressure keeps a lot of that humidity out of there, so really, the tobacco barns are almost a perfect on-farm solution for drying this product down,” Propheter said.

Extracting from whole-plant biomass makes the harvesting and storage process much simpler than focusing just on hemp flower, according to Robert Leaker, president and chief operating officer of Eureka 93, a vertically integrated hemp, CBD and pharmaceutical company based in Eureka, Montana.

While hemp fiber farmers have been baling hemp straw and fiber for decades (see “Storing Hemp for Food and Fiber”), the same process can be used to quickly and cost-effectively take shorter plants grown for CBD off outdoor production fields, and the material can be kept at least for the short term, he said.

Bales are dried and wrapped in plastic to protect biomass from temperature fluctuations, humidity and ultraviolet light.

“You want to keep it dark, keep it dry and keep the oxygen out of it,” Leaker said. “That’s why the tightly wound bales are great for six months to a year. If you want to go any longer than that, you’ve really got to separate the biomass, deseed it and pelletize it.”

Leaker said his company will buy:

Ultimately, no one standard currently exists for storing hemp. And as more producers open for business, they’ll likely develop their own custom solutions that work best for their needs and customers

All varieties of hemp, no matter the end use, are susceptible to mold if plants are not dried sufficiently and stored in low-humidity, environmentally controlled spaces.

“Humidity control is of critical importance, because if you can’t control your humidity, that material moisture backs up and creates the possibility for development of mold that can produce aflatoxins and ochratoxins,” Propheter said.

Mold is the biggest issue in terms of pests. Depending on how it’s processed, other contaminants can also affect hemp quality, Leaker said.

“For most extractors (who use ethanol) like ourselves, any biological contaminants would get destroyed in the process,” Leaker said. “It’s a little different with cannabis because people are using the bud directly, and they’re ingesting the cannabis bud either through inhaling or through edibles. With CBD, you typically are doing a little more processing because you’re just really after the CBD molecule itself.”

Like marijuana, hemp flower and biomass will lose potency over time with exposure to high temperature fluctuation and elevated ultraviolet light, causing the degradation of cannabinoids. That’s why bales of biomass are wrapped in white plastic—to keep the sunlight out.

“If you have UV exposure, the CBD will degrade,” Leaker said.

Cannabinoid content will typically degrade by 1%-2% over a year when hemp is stored, Leaker said, so it’s important for processors to test for that when receiving a shipment to ensure they’re receiving what is being claimed. He noted cannabinoid content can also vary within a field-grown hemp crop.

How Long is Too Long?

Using freshly dried hemp rather than stored is ideal to optimize the cannabinoid potency of the crop, but if done correctly, hemp flower and biomass can typically be stored for up to a year, Propheter said.

“Generally, when you take an agricultural product and dry it down to a certain percentage of moisture, it will stay as long as you’re keeping it in a climate-controlled environment,” Propheter said. “But if you’re able to dry that product down to 10% or less moisture, it’s going to stay a whole heck of a lot longer.”

When evaluating a hemp crop that has been in storage, there are certain characteristics to look for to determine whether it has held up well.

“Look for things like if the color has gone off—like if it’s a dark brown as opposed to green, which should still have chlorophyll in it. We prefer green,” Leaker said.

“You don’t want to see mold or anything like that in it. It should be nice and clean and green and dry, with a good smell or bouquet. When it smells good, it’s got a really good terpene profile and then you know you’ve got something that’s reasonably fresh. The terpenes are a good indicator of other cannabinoids that are in the mix.”

Sourcing hemp from different growing regions throughout the year will allow processors to avoid having to keep large stores of hemp biomass, Leaker said.

“Take advantage of geographical diversity across the United States,” Leaker said. “Rather than growing it all in one northern state, where you get one crop a year and you have to grow enough per year, you can get up to three crops in the continental United States. That makes more sense from a cash-flow perspective and keeps the biomass fresh, so you don’t need acres upon acres
of storage.”

Ideally, vacuum-sealing product for long-term storage would keep it fresh, but it may not be practical or affordable to do when scaling a business, Propheter said. That’s why stocking hemp in a climate-controlled environment is important.

“The packaging really isn’t as important as the environment in which it’s stored,” Propheter said. “The most important part is generally making sure that you can control the temperature and humidity, wherever it’s being stored.”