Oklahoma voters on Tuesday approved an open-market medical marijuana program: no caps on the number of business licenses, and doctors can recommend MMJ for any patient ailment.

Marijuana Business Daily projects that such an unrestricted MMJ market, if it sticks in its current form, could generate $100 million to $150 million in annual sales several years after the launch.

Voters supported the measure by a double-digit margin despite a strong, last-minute opposition effort by a coalition that included the Oklahoma State Medical Association, religious leaders, law enforcement agencies and business groups in this conservative state.

With Oklahoma’s passage, medical marijuana now is legal in 31 states and Washington DC.

The statutory measure can be changed by the Oklahoma Legislature and, based on what’s happened in other states such as Maine, the final medical marijuana regulations could look quite different.

“We think we’ve written the proper medical law with proper business aspects to it,” said Chip Paul, co-founder of Oklahomans for Health, which put forth one of the most wide-open MMJ initiatives in the country.

Oklahoma Gov. Mary Fallin, however, recently characterized the statutory change as so open-ended that it is tantamount to allowing recreational marijuana.

Fallin said she plans to call a special session for lawmakers to develop a regulatory framework; many groups want more restrictions.

Paul said proponents will be proposing MMJ program regulations to the Legislature that are consistent with the voter initiative.

Key details in the initiative include:

The initiative calls for the state to make medical marijuana license applications available within 30 days.

McNutt declined to provide specifics about what the governor would like to see in the legislation based on her concerns about the initiative, other than to say the “highest priority (would be) given to the health and safety of Oklahomans.”

The “Vote Yes on 788” group supporting the initiative acknowledges on its website that the Legislature can enact changes.

Some revisions may be acceptable to the group. For example, “Vote Yes” believes the state health department isn’t capable of regulating the industry as called for by the initiative because of recent turmoil over budget shortfalls and other issues.

Paul, a board member of a new trade organization called the Oklahoma Cannabis & Hemp Association, is part of a working group that’s writing MMJ regulations. He indicated the association likely will recommend to lawmakers an independent committee to oversee the medical marijuana industry.

He promises a fight if Oklahoma’s legislature tries to significantly alter the spirit of the initiative.

Chart: Medical cannabis as alternative to opioids could give Illinois’ MMJ program a massive boost 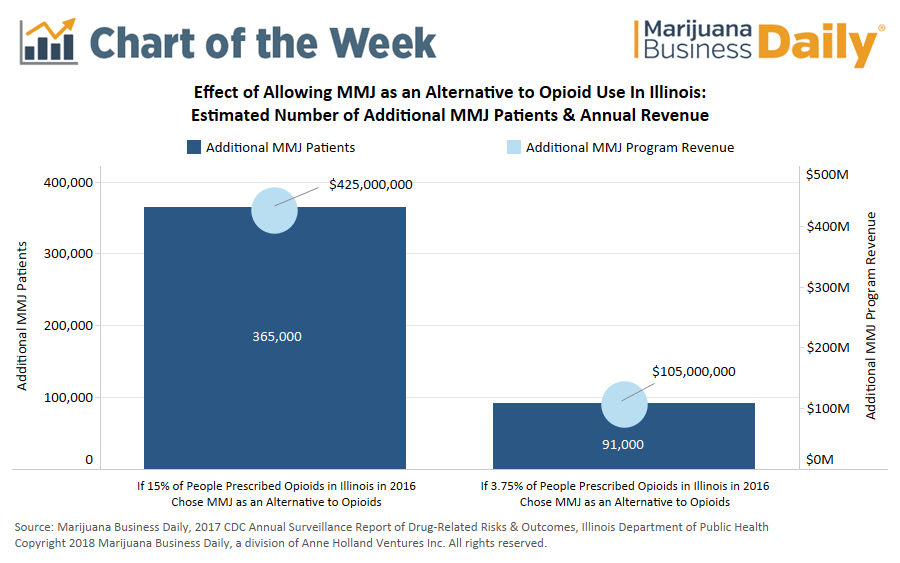