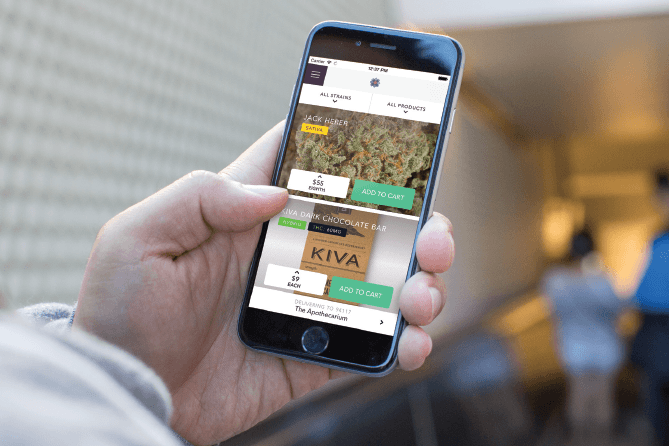 Thousands of medical cannabis patients shop for products without ever leaving home, buying online and getting the order delivered to their door. But so far California is the only state where the marijuana delivery business has firmly taken hold.

In most other state-legal cannabis markets, home delivery is banned or not expressly allowed. Even though delivery companies and services have cropped up in states such as Colorado and Washington, law enforcement has been quick to stop those efforts. Remaining businesses generally operate in the black market. A handful of states allow limited delivery or will so in the future (such as New York), but for now this part of the industry is mainly concentrated in California.

While the delivery landscape and related laws vary across California, the widespread popularity of cannabis delivery led policymakers there earlier this year to include delivery as a legal business activity under the state’s new medical marijuana regulations. There’s also a delivery business provision in a proposal to legalize recreational cannabis in California this fall.

For now, delivery operators continue to serve customers as they have for years across California. But many have an eye on the future, given that MMJ patients often are physically unable to make the trip to dispensaries, while others simply prefer the anonymity that ordering from home offers.

That means there will almost certainly be room in California’s legal marijuana trade for potentially hundreds of delivery-related companies, and perhaps even for more down the line nationally assuming that cannabis laws continue to loosen.

Given that California’s cannabis business scene has been either unregulated or overseen locally, it’s difficult to gauge many aspects of the current delivery industry. But those in the California trade say the state is home to literally hundreds of MMJ delivery companies as well as a few prominent tech firms that facilitate deliveries.

David Hua, the CEO of California software company Meadow, estimates 40%-45% of the state’s medical cannabis market is delivery-based. “And I don’t think people realize it’s that large,” he said.

A co-founder of Herb, a non-storefront collective that delivers MMJ to its members in the Los Angeles area, called the market “extremely competitive.”

“There’s an unbelievable amount of stores and delivery companies,” said the executive, who requested anonymity due to possible legal conflicts with the city of L.A.

The executive added that despite the competition, the business opportunities are enormous. Herb has more than 5,000 members and is signing up about 10 new ones every day in the Los Angeles area.

“We’re a small fish in a big pond, and we’re doing really well,” he said. “We’ve grown every single month that we’ve been in existence” since founding the collective about two and a half years ago.

SpeedWeed is even bigger, with an estimated 30,000 members in its collective, according to co-owner Jennifer Gentile. The company is much bigger than many of its competitors and can deliver MMJ to any patient in almost every part of California – except Los Angeles proper, where the company has been battling the city attorney in court.

Despite having been served with a cease and desist letter in L.A. back in February, SpeedWeed began expanding its operations throughout the state in April. Gentile said the company is thriving.

Most delivery business executives declined to discuss annual revenue numbers. But Zach Pitts, the owner of Los Angeles-based Goddess Delivers, acknowledged the company is pulling in “hundreds of thousands” in revenue a year. That’s up from tens of thousands of dollars in 2011, when the business was founded.

The business model for a delivery operator varies by company. While some companies provide actual delivery services, others such as Meadow and Eaze offer online technology platforms that patients use to order. The orders are relayed to dispensaries, which perform the actual delivery.

The most obvious issue many delivery-related companies face is the legal limbo in which they operate.

“The single biggest hurdle is not having a local permit. That affects us in everything we do,” the co-founder of Herb said.

Running afoul of law enforcement, in fact, is an industrywide issue.

“It’s something that everyone in the industry faces … I know someone (in the delivery business) who was raided maybe six months ago or less,” Pitts said.

The lack of a business license and the resulting legal liability also affects how delivery-related companies in California conduct business. Gentile, for example, said she’s faced problems finding landlords willing to rent office space to her company. Similarly, finding locations for distribution hubs can be a real headache.

“That’s a very common thing in delivery,” Gentile said, adding “that can be a really scary thing to have to deal with as a business owner.”

Given that most states haven’t yet embraced cannabis delivery, a possible work-around is through companies such as Meadow and Eaze, which assist existing storefronts in performing deliveries but don’t actually make the delivery.

Although Meadow is still focused on California as opposed to expanding into new markets, Hua said the tech side of delivery is certainly going to keep improving.

“Delivery isn’t going away. The question is how efficient is it going to continue to get?” Hua said, adding with a joke that some in the trade are already contemplating the possibilities of cannabis delivery via drone or self-driving car.

But delivery won’t really hit its stride until companies like Google and Apple get on board and begin allowing cannabis delivery apps to be downloaded to smartphones, Hua said.

SpeedWeed changed its approach this year from what Gentile calls the “ice cream truck model” – under which small companies drive around neighborhoods with cannabis inventory on hand in the truck, selling on street corners. Now, it has drivers put together specific orders before leaving a distribution hub. Those drivers deliver only what customers have ordered.

Many “delivery” companies still use that ice cream truck model, Gentile said. But a lot are also becoming more visible, despite the obvious legal risks that can accompany greater visibility.

“The delivery owners I know … all have websites, very professional staffs, phone numbers and all that,” Pitts of Goddess Delivers said.

Even in California, which has been much more tolerant of delivery-related businesses than other states, there are ongoing fights over regulations. And that’s probably not going to cease anytime soon, given that California’s new MMJ rules won’t go fully into effect until 2018.

The main problem, she said, is that California’s new regulations require fully compliant medical cannabis businesses to obtain both local and state licenses. That’s led to a lot of local government officials making sizable – and often unrealistic – demands on companies that are trying to play by the rules.

She cited one case of a southern California town telling a cannabis business that it wanted 25% of that company’s entire revenue.

“It got laughed out. Businesses were like, ‘Are you kidding me?’” Gentile said.

There are also logistical questions, such as in which locality a delivery business like SpeedWeed would acquire a local license when it’s delivering cannabis all over the state. Would it need licenses in every municipality where it has a distribution hub, for instance?

In the long term, however, government oversight will prove to be a good thing for delivery-related companies, Gentile said. It will provide stability and legal protection that’s been lacking for years.

“As an industry, that’s something we’re really looking forward to,” Gentile said.