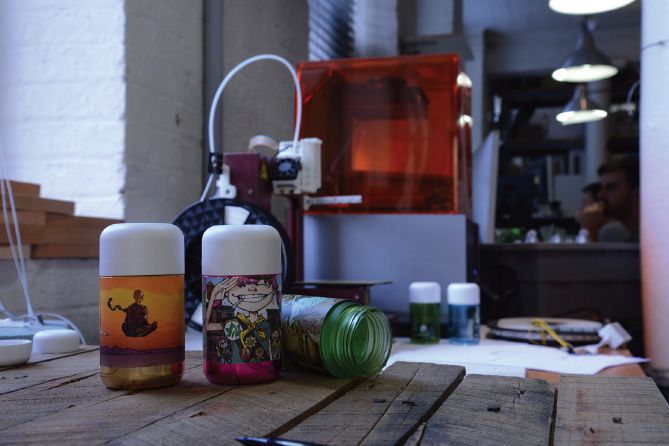 Plastic bags are out. Custom art jobs on brand-specific packaging are in.

That may be a bit of an exaggeration – yes, the majority of marijuana packaging still consists of generic pop-top bottles that cost only a few cents apiece – but cannabis packaging has grown into a very big business in a few short years.

That growth stems in large part from strict state-mandated packaging regulations that generate needs for child-resistant packaging, exit bags and precise labeling, to name a few. Plus, each type of cannabis product has its own packaging needs.

Such requirements have driven demand for companies that have been willing – and able – to adapt quickly to changing regulations, and a few of those companies have dominated the market for several years. But some newer companies, and even a few that have been around for a while, are starting to sense an opening in brand identification.

That means an even newer niche market within cannabis packaging has emerged: custom designs whose aim is to set a cannabis brand apart from its competitors.

Some estimate the number of packaging businesses range from fewer than 10 large companies and distributors, like Kush Bottles and Marijuanapackaging.com, to a few dozen smaller specialty packaging firms. And more seem to be joining their ranks every month as the overall industry continues to grow into new states and, thus, create more demand for packaging.

Marijuanapackaging.com generated $8 million in sales in its first year, 2013, according to Ricky Yuan, the California company’s managing director.

“The second year it grew to $15 million, and the third year it went to $24 million,” he said. “And we’re on our fourth year, so you can see how fast that went.”

California-based Kush Bottles, founded in 2010, has achieved big numbers as well, having pulled in about $8 million in revenue for the 2016 fiscal year, said CEO Nick Kovacevich. That’s an increase of about $4 million from the previous fiscal year for Kush, which hit $3 million in revenue in the second quarter of 2017.

Like Marijuanapackaging.com, Kush deals in volume with about 2,000 different products available for wholesale, including around 800 in the packaging category (the rest are ancillary marijuana products, such as smoking devices).

“We’re now more than a packaging company, and we offer accessories and services, anything from gloves to lighters to pipes,” Kovacevich said. “We really got to the point where we sell to anywhere on the supply chain.”

New Jersey-based Stink Sack – another legacy packaging company that was formally launched in 2013 after having been the founder’s “side project” for three years – recently rebranded as Dymapak in early 2017 and is also broadening its customer base. The company is much smaller than Kush in terms of offerings, however, with only about 45 different products for sale.

“Our entire strategy is based off supplying these producers directly with custom packaging,” said Dymapak CEO Ross Kirsh, who noted the company’s sales have doubled every year since 2013 and broke into the millions in 2014. “That’s our bread and butter – customizing packaging for people.”

Other newcomers to the market have a similar approach because cannabis packaging is essentially the only market left for packaging firms that don’t already have an established customer base and hundreds – if not thousands – of cheap wholesale products to sell to retailers and product manufacturers nationwide.

“The only way to differentiate your brand is really in packaging,” said Ed Kilduff, the founder of New York-based Pollen Gear, which launched in November 2016 and offers about 14 products.

“The industry has been used to getting cheaper and cheaper and cheaper, so anybody can go on Alibaba and buy the cheapest little pill bottle and slap a label on it,” Kilduff said. “The big challenge for us was to change (the industry’s) perception and convince them that, ‘If you’re really trying to sell premium flower, you’re going to have to spend a bit more on packaging.’”

That’s why Pollen Gear contracted with a professional comic book artist – who has X-Men and Deadpool comic credits to his name – to put together a custom-designed line of glass packages for high-end flower. To Kilduff, that’s the future of cannabis packaging.

“Everything is customizable. We can put a label on it, we can do digital printing, we can do custom color of the plastic,” Kilduff said. “The stuff we have is truly a blank canvas.”

He’s not alone. Marijuanapackaging.com’s Yuan, Kush’s Kovacevich and Dymapak’s Kirsh all believe packaging is going to play a central role in brand identification in coming years, so their companies have invested significantly in custom packaging departments.

“That is a division that we noticed that’s growing extremely fast. And everything is done in-house,” Yuan said, referring to Marijuanapackaging.com’s custom work department. “A lot of business customers want to differentiate themselves from their competitors.”

However, for larger companies like Yuan’s, the custom-to-generic sales gap is still enormous. Yuan said only a “small subset” of customers currently are willing to pay for custom designs. “It’s like 5% to 95%,” he said.

“We do such high volume in generic child-resistant containers and accessories, that carries the vast majority of our business.”

The biggest obstacle for packaging companies is the same as it’s been for years: regulations that are in constant flux. And these days, companies must factor in the differences in regulations across the country, given that roughly a dozen states have either legalized medical marijuana or seen their markets come online in the past two years.

“The biggest challenge of course is regulatory,” Kirsh said. “The government loves to put rules in place and then a few months later change them up.”

Such moves, whether it’s requiring updated labeling or new child-resistant formats, can cost packaging companies – or their customers – thousands of dollars.

“We’ve heard from many of our customers that they’d like to order as little as possible, like a couple hundred units every two weeks, because the language changes all the time in the packaging,” Kilduff said. “So, if they buy four months of inventory and, all of a sudden, the state of Washington changes the law, they have to change it or throw it out.”

Several companies have also had to deal with widely differing customer demands depending on the state regulations in which they operate. Products that sell well in Colorado, for instance, may not be nearly as popular in Washington or Oregon.

“Every state is different, but because we’re ready for a wide variety as it stands, as states open up, we’re ready for them,” Yuan said. “That challenge is something that’s a lot smoother now.”

On top of the regulatory changes, demands from customers have changed as well, Kovacevich said. That’s kept Kush Bottles on its toes when it comes to satisfying client needs.

“The other thing that’s really changed in the last two years has been the product segment mix, where we have a situation where concentrates and oils and these different form factors are rapidly taking over the shelf in terms of market share, and decreasing the pure raw cannabis flower that’s being sold, or your traditional types of edibles like brownies and cookies,” Kovacevich said. “Our portfolio has had to evolve as well, because you can’t package a gram of crumble (wax) or a half-gram of oil the same way you would package flower.”

State-mandated, child resistant packaging has been a trend in the industry for several years, and it shows no signs of abating. That means any company that wants to either enter the space or ramp up its presence will almost certainly deal, at some level, in child-resistant packaging.

“My prediction is that within a couple of years, (the entire industry will) go the way of Colorado, and only require child-resistant packaging,” Kirsh said.

Customization is the basic upshot of the highly competitive business of marijuana packaging. While plenty of companies have come and gone in recent years within that particular niche, more are being founded every year, and older businesses that still dominate the market are also exploring custom production.

Some, like Pollen Gear, have even structured their business models around that trend.

Recyclable packaging is something that pretty much every executive has gotten an earful about at one point or another. And while it’s not yet a reality, many are hard at work trying to figure out how to produce recyclable, child-resistant and cost-effective packaging.

He also pointed out that “people hate the plastics business. They think it’s all environmental waste … Most of the packaging right now is in plastic, because it’s hard to make child-resistant packaging out of glass.”

The packaging business is made up mostly of niche players like Dymapak and Pollen Gear, and Kush’s Kovacevich believes many of those companies will soon be bought up, especially in another year or two when newer adult-use markets start to flourish the way Colorado’s has.

And while there will be competition, Kovacevich said, he’s more concerned about traditional pharmaceutical packaging companies getting into the business than he is smaller operators. So his hope is that the market will contract and allow some of the bigger operators, like Kush and Marijuanapackaging.com, to get even bigger – a situation that would then give them more of a solid competitive edge for a longer run into the future.

“The bigger driver for competition will be the California and Nevada marketplaces. When people start to see the amount of sales … when there’s actual seed-to-sale tracking, that’s when people are going to go, ‘Holy crap, this market is huge,’” Kovacevich said. “We see a lot of these smaller companies being really ripe for acquisition targets.”