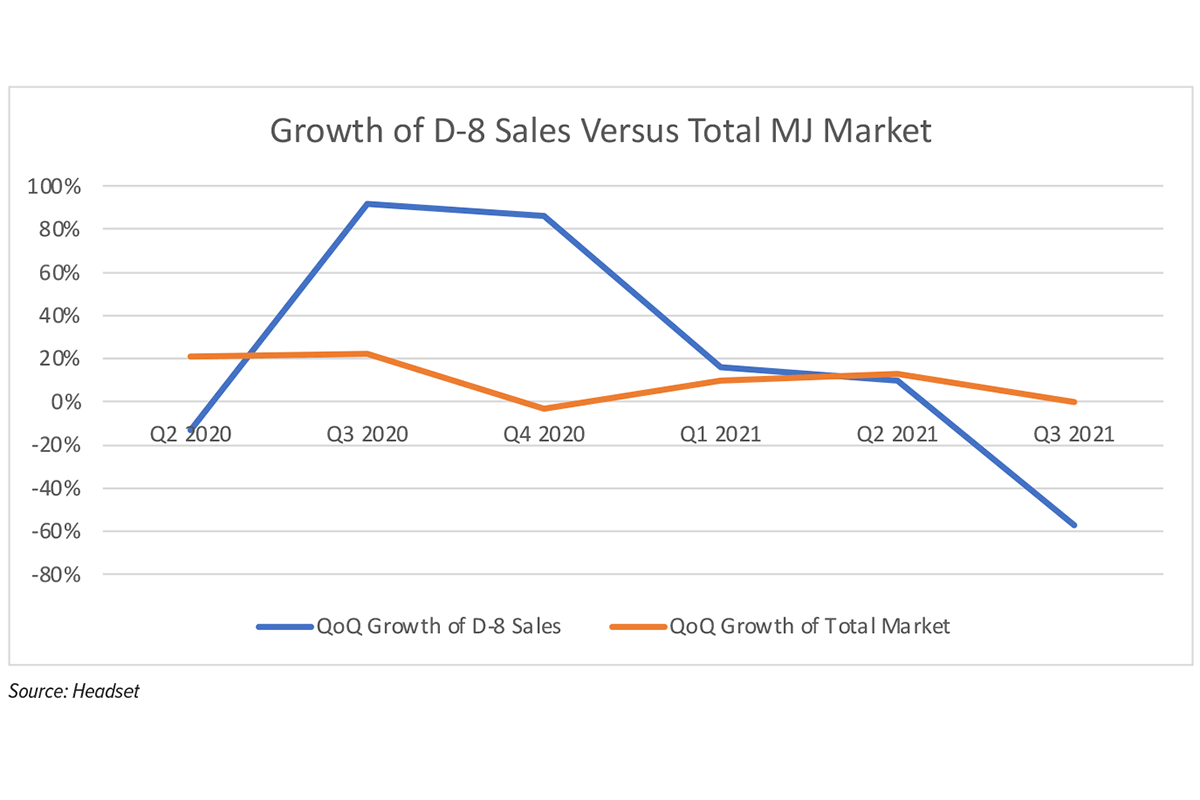 Delta-8 THC has been most popular in states where traditional delta-9 cannabis is prohibited or highly restricted, a difference experts attribute to availability and access.

Because marijuana isn’t legal in those states, there are no licensed retailers, just illicit market sources. Delta-8 THC, meanwhile, is readily available in CBD and vape stores as well as gas stations, convenience stores and other storefronts.

But D-8 is also finding fans in recreational states because of its purported effects. Many consumers say the delta-8 high is milder than delta-9 and doesn’t cause the anxiety that some consumers feel with marijuana.

“This was truly a customer-driven phenomenon,” Jarboe said, noting that the first retailers to sell D-8 were vape stores and head shops, “which have always been in that notorious gray area.”

In fact, Jarboe’s D-8 products have become so popular that they’ve cannibalized his CBD sales. He estimated 35%-40% of his sales are D-8.

But not all cannabis entrepreneurs are excited about the explosive popularity of D-8 and other lab-made cannabinoids.

“It’s definitely having some impact in legal markets,” said Morgan Fox, a spokesman for the National Cannabis Industry Association at the time of this interview who has since joined NORML as political director.

“A lot of these businesses are understandably upset because it’s taking away market share. And now it’s being taken away by people that haven’t had to jump through all the hoops that they have had to—or have to pay as high taxes as they do. So I can understand that it’s pretty frustrating.”

“As far as I can tell, the competition is not between delta-9 THC products and delta-8. … At least in the regulated state markets,” he said. “In Washington, for instance, there are so many delta-9 products available—and the amount of testing and regulation involved with getting a product to market is such that—why would you go and purchase a product at the gas station or at your head shop when you can go into a regulated store?”

“I think (D-8) will have some market implications at the margin, but there’s a bigger conversation. And that’s around the safety of the products that are available … because there isn’t the same amount of rigor associated with getting a delta-8 product to the market,” he said.

Makoso is one of many cannabis professionals who want to see D-8 regulated like D-9, especially when it comes to third-party lab testing. His safety concerns include:

“When you’re able to put a product on the shelf that doesn’t have very much regulatory oversight, that trickles down to the safety and efficacy of that product,” Makoso said. “You’re going to get these cases where less-than-scrupulous manufacturers are creating products with very little concern for what’s in them.”

Fox agreed: “The real problem is not necessarily the substance itself, but how it’s being produced. The fact that it’s being made almost entirely in unregistered, unregulated labs is really problematic.”

“What hurts the business is when you have unsafe products on the market,” Reich said.

“Frankly, it’s a pretty low bar to send products that you’re manufacturing into a third-party lab for testing,” he said. “If you’re making safe products, you should not have a problem doing that.”

What’s ahead for D-8

Some licensed marijuana companies believe that interest in D-8 will fade once state-legal cannabis arrives in markets where it is now illegal.

For one thing, cannabis consumers generally prefer to buy regulated and tested products.

Another concern is economics.

“From a production standpoint, I have to imagine that it’s more cost-effective to extract delta-9 THC from cannabis plants than it is to extract CBD from hemp and then put it through massive chemical changes in order to make a new product,” Fox said. “It’s only competitive now because the people that are making it don’t have to deal with the same regulatory burdens that people who are licensed and legally producing delta-9 do.”

He believes the market for delta-8 THC will disappear when the U.S. Food and Drug Administration better regulates CBD and gives producers more avenues through which to unload their products.

“When you give people more avenues through which to be able to sell and market their CBD products, I think we’re going to see a dramatic decrease in the amount of D-8 production,” Fox said.

Not everyone believes D-8 will be outpaced by marijuana, regardless of the legal framework.

Reich at Crescent Canna said he doesn’t want delta-8 to be perceived as a competitor to the traditional licensed cannabis industry.

“We believe that the two can absolutely coexist, and we see delta-8 THC as an important evolution of the cannabis industry. I can see why some would consider it a threat, but we believe it’s an opportunity to really expand access … especially in markets that don’t yet have a legal marijuana industry,” Reich said.

Jarboe, who produces both CBD and D-8, sees a future where many more cannabinoids are available in commercial amounts and where manufacturers will be able to “manipulate different ratios of cannabinoids” to create products that target specific effects for the consumer.

Of course, that will be possible only after state and federal regulators decide how to regulate cannabinoids other than delta-9 THC, something Jarboe believes will happen sooner rather than later.

“In three to five years, they’re going to have to lump all cannabinoids together,” he predicted.

“Because D-8 hit, you have well-heeled companies that have money and really good organic chemists trying to find the next D-8. There are literally hundreds of millions of dollars being spent right now exploring the minor cannabinoids,” Jarboe said. “That’s what’s going on now. And, so, yes, it’s exciting.”