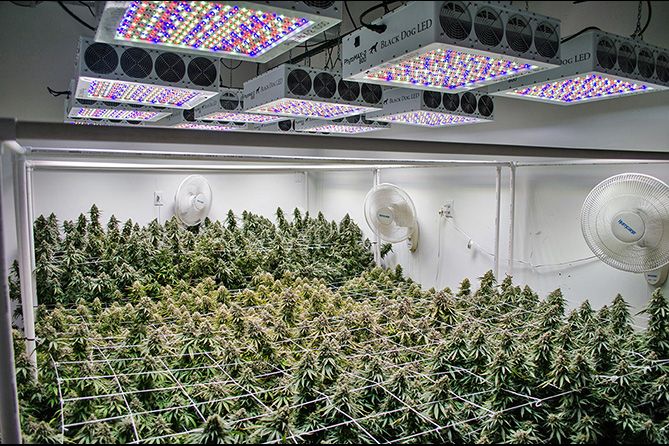 Growers can cut their power consumption through LEDs, cannabis-specific HVACs and greenhouses

When looking to make your grow consume less juice, the three main areas to highlight are:

Regardless of whether you’re growing in an indoor warehouse or a greenhouse, your lighting system directly affects how you run your HVAC. So all three of these considerations play into your decisionmaking.

“We would estimate lights require about 50% of your energy consumption and HVAC another 50%,” said Av Singh, a cannabis cultivation adviser based in Nova Scotia, Canada. In fact, Singh noted, the two systems can affect one another, given that some types of lights put off more heat than others. “Lights are triggered by HVAC and back and forth.”

LEDs require less wattage to create the same amount of light, and less wattage means the lights are putting out less heat.

“That’s where the heat savings come from,” Franz said.

Van McConnon, a Boulder, Colorado-based cannabis consultant who once operated cultivation sites in Nevada, said one trick for a greenhouse operation is to include a light bar that will move over your plants as supplemental light.

An automated light bar rolls on a track above the canopy and bathes cannabis in light for about 90 seconds every four or five minutes.

That will save you money on equipment and energy costs instead of hanging lights across your entire facility.

Singh also recommended using LEDs in areas that will provide rebates for less-energy-intensive equipment. For example, some provinces in Canada with energy-efficiency programs will offer rebates of $200-$250 per light.

Franz pointed out that while lighting can save you money on energy costs, “HVAC and dehumidification technology have the ability to move the mark a lot more than lighting does.”

The first step you should take if you want to reduce your energy consumption is to buy a purpose-built HVAC system—meaning one designed specifically for cannabis cultivation facilities, according to Franz. Several brands are available, including some that double as HVAC systems for indoor swimming pools.

Residential HVAC systems aren’t quite capable of handling the unique challenges of a marijuana facility, he said. Growing marijuana plants creates a large amount of moisture, for one, and often plants are grown in climates, such as Nevada, that are not ideally suited for cannabis production. One of Franz’s clients bought an older building with residential HVAC and operates about 24,000 square feet of flowering space. Franz said this client spends about $1 million per year maintaining the residential HVAC system.

“People tend to skimp on HVAC because it is going to be quite a bit more expensive,” Franz added. “But the payback is there.”

McConnon advises using a desiccant-based HVAC system. A conventional HVAC system will use more power to remove moisture from the air, he said, while a desiccant-focused system uses a wheel made of corrugated material to draw water from the environment.

Singh recommends gradually powering up and turning off your lights to reduce the demand on your HVAC system.

“A great way of reducing your HVAC demand is having lights that mimic daytime and nighttime,” he said. Why? When you turn off all your lights, your HVAC system immediately must work harder to catch up to that change. Instead, program your lights to mirror dusk’s slow fade to dark and the gradual brightness of dawn.

“If you have your lights immediately go on and your room jumps to 75% relative humidity, to bring it back to 55% is a lot harder than if it just went to 60%,” Singh said. “If your system can’t catch up, then it’s working a lot harder than it should have to work.”

McConnon has been closely following the steep decline in wholesale prices in mature recreational cannabis markets such as Colorado.

That price drop makes it tough to stay profitable when operating an indoor cultivation facility. The cost of production—primarily energy costs—are too high with indoor grows, according to McConnon.

“The indoor facilities are the noose that’s going to hang these businesses,” he said. “My advice to every client I talk to is, ‘Do not spend another dollar on indoor grows. Period. You want to save money on indoor? Don’t build it.’”

McConnon instead recommends a greenhouse or hoop house. The energy savings in using sunlight could add up to $100-$250 off your cost of production per pound of cannabis, he said.

If you follow McConnon’s advice, Singh recommends LEDs for supplemental lighting. Even in Canada, the major issue with greenhouses is keeping them cool. It’s crucial you don’t let the temperature exceed 84-85 degrees, Singh said.

“Our biggest challenge is getting rid of heat,” he added. “Even in northern climates.”

Beyond the three main ways to cut energy costs, other tweaks can save you money.

Singh has seen some success with a voltage stabilizer, which helps to deliver a constant voltage load, depending on the power grid. If your system sees a lot of surges, you might end up using more power than you require.

“You could get surges where you’re drawing 150 volts, when you only need to be drawing 110,” he said.

Sensors also come in handy. You can use voltage meters to determine if your fans are drawing too much power, for example. If for some reason your equipment is using power it shouldn’t, you can evaluate and adjust accordingly.

Also, if your power provider allows for energy consumption during off-peak hours, you might be able to operate at a discount.

“You’re going to consume the same amount of energy, just going to have it cost less,” Singh said.

According to Franz, another avenue to explore is cogeneration, the simultaneous production of at least two forms of energy from one source of fuel. Utilizing natural gas to generate electricity on-site could save you money, depending on the cost of the gas. Natural gas-generated electricity may be cheaper than the energy you buy from the power company.

“The upfront costs can be pretty pricey for a system like that, but there are companies that will come in and finance that for you,” Franz said. “There’s a lot of opportunity to get cogen plants set up for little or no money out of pocket.”