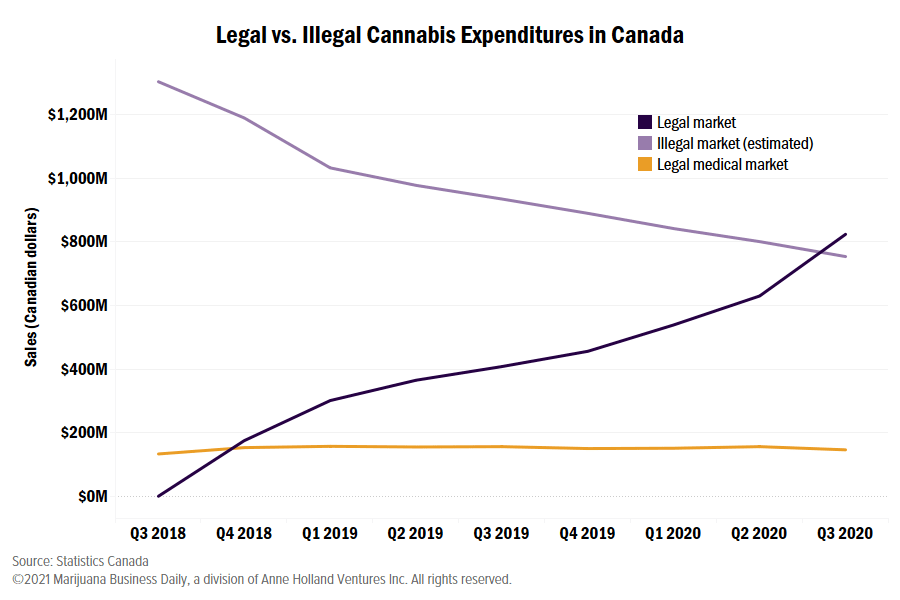 Sales of regulated adult-use cannabis in Canada overtook illegal transactions for the first time in the third quarter of 2020, according to new Statistics Canada data.

That development demonstrates the success of legalization in these early years, experts say, though more needs to be done regarding taxes and promotions rules to put the regulated industry on firmer ground to compete with the legacy market.

Falling prices, a wider breadth of consistent inventory and growing retail options have all contributed to the legal market’s success.

Spending on nonmedical cannabis products in the third quarter of last year reached 824 million Canadian dollars ($644 million), according to the updated figures.

Unlicensed nonmedical sales, by comparison, were estimated to be CA$754 million in the same period.

George Smitherman, CEO of industry group Cannabis Council of Canada, said the numbers are encouraging because there is more growth to come.

“It illustrates the success of one of the policy goals, which is bringing (cannabis) sales into the legal framework,” he said.

The underground market is in retreat.

The figures show that spending on illicit adult-use cannabis has decreased substantially since Canada ended prohibition in late 2018.

In the third quarter of 2018, the last full quarter with no legal competition, illegal operators reaped an estimated CA$1.3 billion in sales.

The legal market’s overall success, however, has not resulted in a windfall for large producers.

Companies such as Aurora Cannabis, Canopy Growth and Hexo Corp. have collectively lost billions of dollars in recent quarters after spending large sums of money on unnecessary production infrastructure and M&A in Canada and overseas.

Smitherman said the steady growth of the legal industry has been achieved in an environment where access for consumers is still improving.

He also attributed some of the industry’s success to falling prices.

“It’s really important to point out that price decreases on key verticals of dry flower have been essential for transitioning many of those consumers,” Smitherman said.

Going forward, Smitherman wants the government to look at how the federal excise tax is applied – or more precisely – where it is applied in the production chain.

“Imagine the progress we could make if the government could look at the way that their policies might be barriers to making further progress in the elimination of the illicit sector,” he said.

“To continue that option for consumers, we need to grow the options for consumers – more retail stores as an example, but we also need to be mindful of the end product price. That’s a big piece of work we’re doing with the national government to let them know about some of the constraints the current policy is causing.”

Medical cannabis sales, recorded separately by Statistics Canada, have risen almost 10% between the third quarter of 2018 and Q3 2020.