The time it takes to get from a medical marijuana program to the first recreational sale is getting shorter. Read the story.

With as many as five states poised to legalize some type of marijuana market in November, entrepreneurs might be wondering how soon they can start writing business plans.

The viability of any state cannabis market will depend greatly on the industry regulations that end up being adopted—and the regulatory processes can differ greatly depending on the ballot referendum in question.

ADVERTISEMENT
For instance, New Jersey’s entire ballot measure, which would legalize adult-use marijuana in the state, is a scant four paragraphs. It simply asks if voters want to approve the production, sale and taxation of marijuana, leaving all the details up to the state’s Cannabis Regulatory Commission.

Arizona’s ballot question would also legalize recreational marijuana, but the text of Proposition 207 is 17 pages long. The initiative has a laundry list of specifics for businesses and regulators to follow, but it leaves final industry rulemaking to the Department of Health.

It’s likely there are plenty of entrepreneurs—and, in some cases, existing marijuana companies—eager to do business in each state facing a ballot measure. But the only real guarantee at this point is that success at the ballot box will lead to even more rules for legal operators. 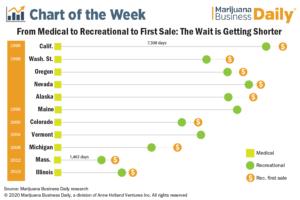 “It’s just different in every state,” acknowledged David Boyer, a consultant who worked on the victorious 2016 adult-use legalization campaign in Maine.

That’s because the laws, politics and procedures are different in every state—particularly for marijuana.

Maine is a cautionary tale on this front because of what Boyer describes as a “series of unfortunate events” that kept recreational marijuana sales from beginning for almost four years after residents voted in favor of the initiative. As of press time, Maine’s adult-use sales were slated to begin in early October.

“You can’t just do a citizen’s initiative and think that it’ll come out perfect and on time. You have to be talking to the people who are going to implement this,” Boyer said. “I never would have expected it would take this long.”

Since 1996, when California voters approved Proposition 215 to legalize medical use, the politicking of marijuana has evolved significantly.

Lawyers, activists, businesses and nonprofit organizations have become increasingly adept at crafting language for both ballot measures and legislative bills that are aimed at creating marijuana industries with solid foundations.

But there are still fairly straightforward ballot questions such as the one going before New Jersey voters, despite all the policy questions that arise when the subject of how to regulate a federally illegal substance is presented.

One reason for that is because 24 states—including New Jersey—don’t have any process for citizen-run campaigns to change state law, meaning it falls on the shoulders of state legislatures.

New Jersey lawmakers couldn’t reach a consensus in 2019 on an adult-use marijuana bill, so they decided to ask voters to decide the issue. Hence the simple, open-ended legalization question, which would give the Legislature the political cover to move forward.

But insiders don’t expect the New Jersey regulatory process will be any easier or harder to navigate than Arizona’s or Montana’s just because it has a simpler ballot question.

Tamar Todd, a former Drug Policy Alliance attorney who’s helped draft a dozen different state legalization initiatives, warned that ballot questions can wind up backfiring if they are
too rigid.

“It’s finding the balance,” she said. “You want to spell out enough detail to make sure it will happen, but then there’s less flexibility to adapt to the market.”

Another complication, Todd noted, can be whether a state opts to change its statutes or the state constitution. The former might make it easier to get legalization in front of voters with a lower barrier to entry to the ballot, but it could also make the law easy for an anti-marijuana legislature to repeal or neuter. An attempt to change the state constitution might be tougher to qualify for the ballot, but it would be harder to amend should problems arise.

“You can really screw yourself,” Todd said of the legalization process. “One of the areas where it’s most difficult is tax rates. If you’re taxing on percentage of sales, you may want to start very low and then—once the illicit market goes away, or if prices increase—maybe you’d like to increase it.”

A Seat at the Table

There’s also a very big difference between states that are launching medical marijuana programs for the first time and those starting an adult-use industry on top of an existing MMJ market. The latter has been the standard, but South Dakota might break the mold if its voters approve both medical and recreational marijuana next month, which would make it the first state to do so.

“That’s sort of open country, but I guarantee you there are lobbyists up there working and saying, ‘When this passes, you have to be a resident of South Dakota’” to own a cannabis business, said Denver attorney Christian Sederberg, referring to common state-residency requirements for marijuana business ownership.

Sederberg, who worked closely on the development of Colorado’s industry regulations, said having a seat at the table will be one of the keys for those hoping to enter the industry in New Jersey and other potential markets.

“It’s really about getting engaged with the legislature and your local government … to develop a regulatory system,” Sederberg said. “You can’t influence anything if you don’t say anything.”

However, he said more detailed ballot questions such as the one in Arizona might allow companies to start laying out their plans soon after the election.

“If it’s a more detailed initiative, you’ve got most of the tools as a businessperson to decide whether or not to enter that market,” Sederberg said. “If it’s a very general question—using New Jersey as an example—you’d have to look at the history of the MMJ market.”

Buy-in by state officials can also be key. Voters in Nevada approved recreational marijuana in November 2016, and lawmakers allowed the existing MMJ businesses to transition straight to sales starting in July 2017, only eight months after the vote.

California-based consultant Avis Bulbulyan said Nevada “killed it” in terms of time to market. “Nevada from the beginning decided, ‘We’re getting into the business of cannabis,’” he said. “They just embraced the idea.”

Bulbulyan echoed Sederberg’s point about participating in the rulemaking process.

“The regulators are as hungry for information as anybody else,” he said. “If you don’t get involved and you simply wait for the state to roll out the program, you’re going to be dealing with regulations that you had zero influence over,” he said. “It’s not necessarily about who can cut the biggest check, it’s about who can provide the most valuable advice and guidance.”

NEXT: Get the Best Return on Investment