Michigan judge Mark Trusock called the state’s legal medical marijuana law “one of the worst statues that was ever written and put into place,” while sentencing a local dispensary owner to probation.

The dispensary owner, David Overholt, pleaded no contest to delivery or manufacture of marijuana. In March, police raided his Grand Rapids-based business, the Mid-Michigan Compassion Club, acting on a February from the Michigan Supreme Court that bans dispensaries statewide. Michigan legalized marijuana for medical purposes in 2008 but does not have regulations over its distribution.

Trusock told Overholt that he believed the dispensary owner was “trying to do the best you could under the circumstances.”

The judge sentenced Overholt to two years of probation instead of jail time, based on a “conditional” plea, meaning the dispensary owner can still fight the charge in the state Court of Appeals.

The discrepancies and vagueness of Michigan’s medical marijuana law has created a volatile situation for cannabis businesses in the state.  The situation was a hot topic among Michigan business owners attending the National Marijuana Business Conference and Expo today. Several expressed anger at the State Supreme Court’s decision, which outlaws all dispensaries that facilitate patient-to-patient sales. The ruling essentially re-criminalizes an activity that the state legalized in 2008, and exerts the court’s power over the decision of the people.

Industry’s Rapid Growth Has Room for Everyone, Steve DeAngelo Says at Cannabis Conference 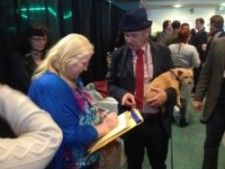