A ruling by a Nevada judge has jeopardized the planned July 1 start date for early adult-use marijuana sales, but some retailers believe they’ll be able to move ahead as planned.

At least until they run out of inventory.

The central issue is whether sales can commence without a resolution to the question that spurred the injunction: Who qualifies for the state-required cannabis distributor licenses?

ADVERTISEMENT
The Independent Alcohol Distributors of Nevada – the group that filed the suit arguing that the Department of Taxation (DOT) didn’t listen when its members tried to obtain distributor licenses – maintains that only licensed liquor wholesalers qualify for marijuana distributor licenses.

If the district court judge’s injunction stands, it could force the DOT to go back to the regulatory drawing board to figure out how the legal marijuana supply chain will work in terms of transporting cannabis products from growers and producers to retailers, even for vertically integrated companies.

The early start program is structured so that only existing medical cannabis companies in Nevada can engage in the new rec industry, from its launch until it opens to new market entrants in January.

And the program’s setup is precisely why MMJ retailers believe the July 1 rec start will still be able to work: They’re already stocked with inventory and have no immediate need for distributors to deliver product to them.

However, that view isn’t universal: Some in the industry worry the court ruling will throw a wrench into the works, and state regulators aren’t exactly sure what will happen next.

Regardless, several retailers are expressing optimism.

“I don’t think it’s going to delay July 1, but it could create inventory shortages after July 1 if the alcohol distributors are not able to get up and running and serving the market in time,” Andrew Jolley, the president of the Nevada Dispensary Association and owner of Las Vegas retail outlet The Source, said Wednesday.

“It’s a speed bump, but not a brick wall,” he said. “I think this will present some challenges – and there are potential challenges ahead of us – but I think they’ll be short term and we’ll be able to get it resolved.”

Jolley said he’d heard from other industry insiders who’ve met with the DOT that the agency plans to continue issuing permits to businesses that want to engage in July sales. Jolley also was told the status of the mandated distributor licenses remains up in the air.

A DOT spokeswoman didn’t respond to requests for comment, but the Nevada Independent published a statement in which the agency said it expects “to issue licenses to qualified marijuana establishments – including retail marijuana stores –  ahead of July 1.”

According to the Associated Press, the agency said it “will explore all legal avenues” to back the July 1 rec sales launch, possibly including an appeal of the injunction issued Tuesday.

That means other retailers are thinking like Jolley and planning to sell as much as they have stocked up before July 1.

Question is, once they run out, how will they legally be able to restock?

“Because of (Tuesday’s) ruling, dispensaries are stocking up in preparation for rec, and we can do that without having the distributors involved,” Jolley said. “But once rec starts, then the distributors need to transport (MJ product to market) … so that process will have to be ironed out by the DOT.”

Ben Sillitoe – the CEO and co-founder of Las Vegas dispensary Oasis Cannabis – said he also is expecting to receive an adult-use sales permit and begin selling to rec customers July 1.

“We just need to keep proceeding with our plans … until we’re told otherwise,” Sillitoe said. “We’ve taken steps to ensure that we won’t run out, at least for the first few weeks. We should be OK without any deliveries well into July.”

However, Neal Gidvani, an attorney with Greenspoon Marder in Las Vegas, believes the injunction will delay the July 1 start, though he agreed that sales “theoretically” could begin July 1 if DOT officials decide to issue sales permits.

“I don’t see an avenue where rec sales can start on July 1, given the preliminary injunction,” Gidvani said. “The reality is we don’t know what the (DOT) is going to do.”

Gidvani suggested the start of rec sales could be delayed by a month or longer while the Department of Taxation resolves the cannabis distributor licensing issue. The agency will be faced with revamping its rules surrounding how many distributor licenses will be necessary to serve the state’s entire cannabis market and then issuing those licenses, Gidvani said.

An industry investor who requested anonymity said the main question now is how the DOT will interpret the injunction.

“The big thing is the person that runs the Department of Taxation (Deonne Contine) has to decide whether or not she can actually issue recreational licenses without violating the judge’s order,” the investor said. “If she says she can’t, then we have no recreational sales.”

However, the AP also noted that Contine testified during a hearing Monday – before the injunction was issued – that “there’s no recreational marijuana program if there’s no distributors … We cannot have sales on July 1, or any time.”

“If the DOT says you can start July 1 … then we’ll proceed,” Doyle said. “If the state comes back 10 days later and says that all rec sales have to cease until the outcome of the court hearing is concluded, then we’ll cease rec sales.” 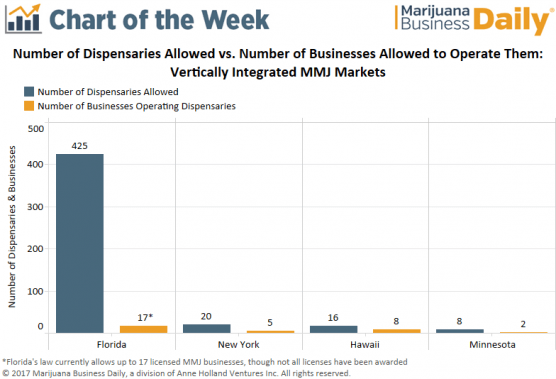