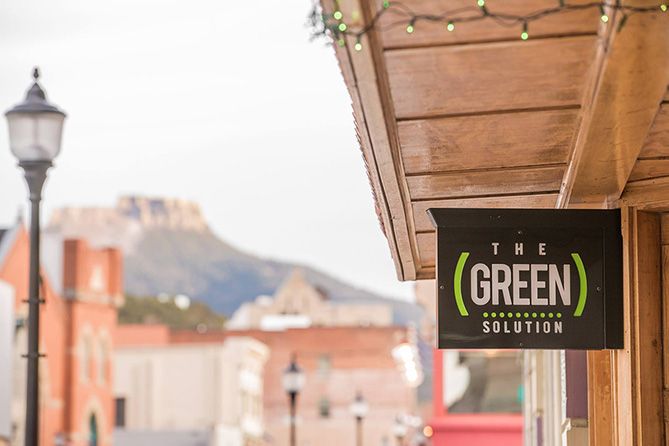 The quaint resort community of Great Barrington, Massachusetts, has fewer than 7,000 residents. But in the state’s first three months of adult-use marijuana sales, Theory Wellness, the town’s first dispensary, sold more than $6 million in cannabis products.

That’s double what the company’s CEO, Brandon Pollock, predicted when Massachusetts transitioned from a medical to a recreational market.

The shop’s surge in sales can be attributed to a strategy that has become more common in the burgeoning cannabis industry: plotting retail operations near state lines.

In some cases, they benefit from reciprocity laws that allow out-of-state medical marijuana patients to make purchases, Easley noted.

They’re also able to appeal to consumers in neighboring states that prohibit cannabis, he said.

And, in adjacent states with adult-use programs—California and Oregon or Oregon and Washington, for example—businesses can win out-of-state customers if their state has lower tax rates or costs, he added.

But there’s a catch: It’s illegal for consumers to transport product across state lines—and it’s incumbent on businesses to operate within the law and educate consumers about the rules, Easley said.

“Something all operators need to get behind is an education campaign—and not just for a business strategy,” Easley said. “It’s a no-brainer: You don’t want to set consumers up for failure.”

The most obvious benefit of operating a marijuana dispensary near state lines is its appeal to out-of-state consumers.

In Connecticut, for example, a highway billboard advertised “Weed is legal in 60 miles,” referring to the cannabis legally for sale at businesses that sit just across the border in Massachusetts. Such messages can create confusion for consumers, who may assume they can travel interstate with cannabis (and it can draw the ire of anti-marijuana advocates).

It’s impossible to know whether consumers travel back to their home states with your cannabis products, but it’s reasonable to assume that many do.

When Theory Wellness opened its doors as a medical cannabis dispensary in Great Barrington in 2015, it was the only marijuana retail store in Berkshire County, which has a population of roughly 200,000.

That situation—combined with the fact that cities in western Massachusetts were more friendly to cannabis businesses—was a big enough advantage at the time, Pollock said. He also knew that, 130 miles north of Times Square, it could become the closest adult-use dispensary to New York City.

By contrast, New Jersey does not allow out-of-state patients to purchase medical marijuana at its licensed dispensaries. But there are other advantages to its location, said Shaya Brodchandel, the CEO of Harmony, a vertically integrated medical marijuana business in New Jersey.

It is located near the densely populated border of New York, with a large population of commuters who pass between New Jersey and New York City every day, Brodchandel said. That allows the company to do business with commuters returning from across the river in New York.

New Jersey is also home to large pharmaceutical companies such as Novartis, Johnson & Johnson, Merck and Bayer, he added.

“We’ve benefited tremendously from the pharmaceutical hub in New Jersey in being able to recruit experienced talent … and improve our product and processes,” he said.

He noted, too, that Harmony’s location gives it greater access to “a major media and consumer market as conversations around legalization continue.”

That has helped the business build brand awareness with potential patients in New York who, for now, cannot purchase medical marijuana in New Jersey but who might be able to in the future.

The Green Solution, a Colorado-based, vertically integrated cannabis company, has a dispensary in Trinidad, a city 10 miles from the Colorado-New Mexico border.

There are some challenges to operating near state lines, Steve Lopez, The Green Solution’s CEO, wrote in an email to Marijuana Business Magazine.

Distribution, for example, can take more time to coordinate.

The Green Solution routes its products through a distribution center. But Trinidad is nearly four hours from the hub, which makes inventory planning trickier. That means employees need to look closely at sales trends and data to plan shipments. And they have to plan deliveries weeks in advance to ensure the company’s inventory of product is in line with customer demand, Lopez said.

Another challenge is staff training on identification cards, Lopez said. At dispensaries near state borders, employees are more likely to see out-of-state IDs and must be more diligent about checking for valid identification.

To do that, they use state and international identification books, digital ID scanners and small magnification devices known as loupes to more closely analyze ID cards.

One way to educate consumers about state law and mitigate the risk of selling to out-of-state customers is to have them sign a waiver or an acknowledgement of state laws at the checkout counter.

Some marijuana retail shops use digital waivers on tablets at checkout that ask consumers to acknowledge the legal ramifications.

Waivers should vary from market to market in order to address any relevant state laws, Easley said. “You’re able to say then, from a liability standpoint, that you educated your consumers,” he added.

In general, a waiver can ask consumers to agree to:

A key tip for operators near state lines is to strictly adhere to state laws and educate consumers on the rules.

For example, The Green Solution’s employees remind out-of-state customers that it is illegal to take cannabis products out of Colorado and that customers would be subject to state and federal laws if they did, Lopez said.

“Being the closest dispensary to Manhattan, we regularly encounter
New Yorkers and tourists who are unsure of the local and state laws,” Brodchandel said. “They assume they can purchase (medical marijuana) without valid identification and then travel interstate with the product.”

Harmony’s website shares information about how patients can qualify for the New Jersey medical marijuana program, and staff members are trained with talking points to explain that out-of-state patients cannot purchase cannabis in New Jersey, he said.

These are sound strategies for operators in adult-use markets, too, Brodchandel noted.

“(Businesses) in states with recreational use should educate customers that it is a federal crime to cross a border with banned products,” he said. “Consumers must be educated on—and comply with—state rules and regulations.”