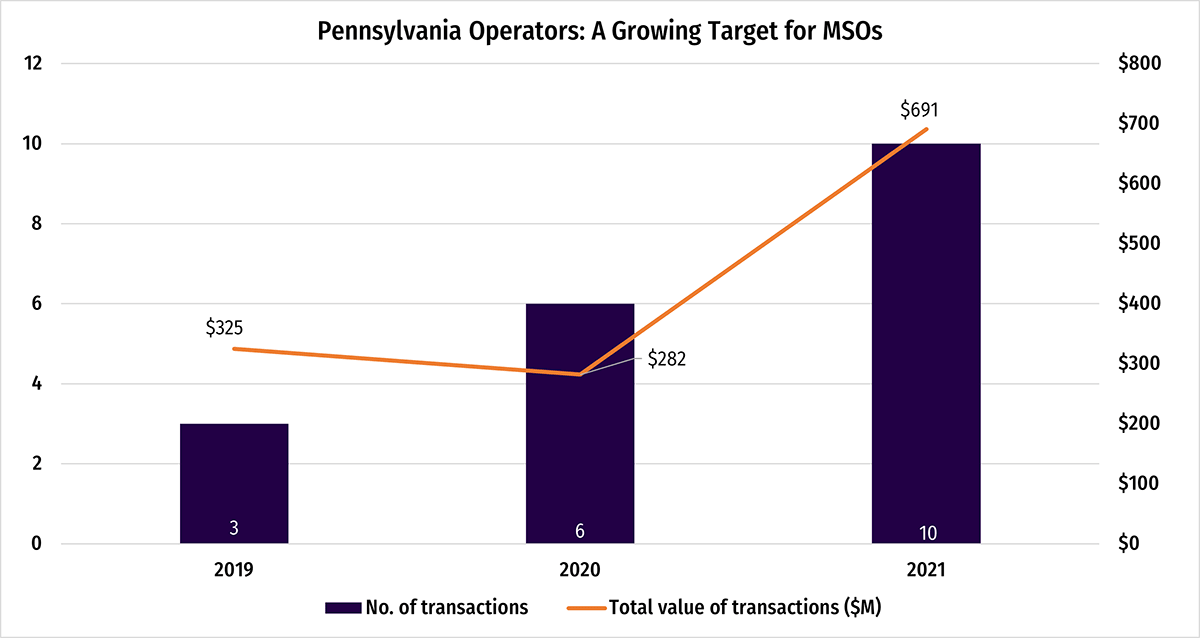 The total consideration of $147 million included:

Verano is buying market share aggressively in Pennsylvania, with five of its 10 acquisitions and 94% of the $507 million in total consideration paid year-to-date targeting Pennsylvania dispensary assets.

Vertical integration through the addition of cultivation is an integral part of the Agri-Kind/Agronomed deal, potentially justifying the premium price Verano paid.

The transaction value represented approximately $2,371 per square foot, which is significantly higher than similar acquisitions of Pennsylvania cultivation/production assets as shown in the chart below.

The five most comparable transactions in the state traded at an average of $1,380 and a median of $545 per square foot, significantly lower than what Verano paid.

Pennsylvania is a desirable market for multistate operators in 2021.

Verano is leading the 2021 acquisition trend in the marijuana sector, but other MSOs, such as Trulieve Cannabis, Jushi Holdings and Ayr Wellness, also have shown a strong interest in the state.

U.S. marijuana multistate operators need to step up their game when it comes to disclosures they file with securities regulators.

A recent MJBizDaily examination of the CEO compensation packages for the 15 or so leading public MSOs revealed several mistakes and omissions in the disclosures.

In at least two cases, companies made simple mathematical errors that vastly underreported the amount of executive compensation by several hundred thousand dollars.

In another case, a company omitted a $529,000 bonus earned by the CEO during the year. In addition, several MSOs disclosed options and stock awards in a separate table on a separate page and without estimated values.

U.S. securities regulators require large companies to put everything in one table, including:

“Investors want to see everything on one page, all the numbers,” said cannabis compensation expert Fred Whittlesey, founder of the Seattle-based Compensation Venture Group.

“If a company is not willing to provide full transparency on executive pay to all stakeholders, we need to question why that is.”

Whittlesey said there is some leeway for smaller companies in the United States. One MSO, which files in Canada, privately defended its behavior, saying it follows what Canadian securities regulators require.

Canadian regulators aren’t as strict as those in the U.S., Whittlesey said, and there are some gray areas.

Yet, marijuana executives have talked for years about being more professional and adopting the same rigorous financial standards as other U.S. industries.

Additional transparency, in turn, will help win the trust of investors.