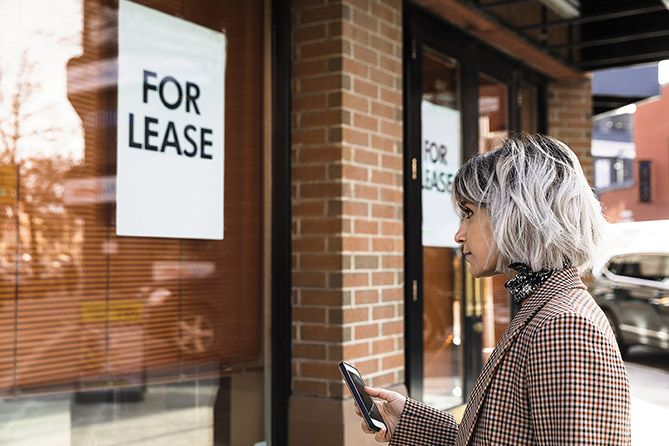 (This story appeared in the August 2020 issue of Marijuana Business Magazine.)

Many cannabis companies are eager to take advantage of any dip in commercial real estate prices that accompany economic downturns.

Amid the coronavirus-induced recession, some marijuana businesses are hoping to pick up assets and properties from rivals and mainstream companies that scale back or close shop altogether. Others hope landlords will slash rents to fill vacancies or avoid losing existing cannabis tenants.

Marijuana companies that want to acquire properties from distressed businesses should be prepared to identify and capitalize on opportunities, experts say. Meanwhile, those cannabis businesses that need relief in rent or that hope to use their own properties to bring in cash should consider the legal and debt implications.

“There’s a lot of flexibility being extended throughout the cannabis industry in general, and that includes within landlord-tenant relationships. At some point down the road, as a derivative impact of the pandemic, we will see companies that are unable to continue operating, and that will free up additional real estate to be purchased,” Graff said.

On the national level, industrial rent prices were up nearly 9% year-over-year to an average of $6.30 per square foot at the close of the first quarter of 2020, according to the most recently available data from Chicago-based JLL. The commercial real estate firm shows a 4% increase in office prices from the first quarter of 2019 to the first quarter of 2020. JLL does not break out the data for the cannabis industry, but costs rose in established marijuana metro areas such as Denver, Los Angeles and Portland, Oregon.

“A lot of the calls that I’m getting are from companies that are looking for businesses that have failed and want to take advantage of those opportunities,” said Paula Turner, broker and co-owner at Desert Pacific Properties. The real estate firm in Palm Desert, California, has a division dedicated to assisting cannabis companies.

Marijuana businesses looking for real estate could benefit from enlisting a broker and looking at several listings. Opportunities can vary even within a geographical area because of differences in zoning regulations, taxes and economic incentives.

Royal Emerald previously planned to set up shop in Vista, California, but ran into red tape during the licensing process. The company later considered Palm Springs and Cathedral City before being wooed by Desert Hot Springs officials, Turner said.

“Desert Hot Springs just rolled out the red carpet and got very creative,” she said. “Because (Royal Emerald’s project) is a research and development facility, it was allowed in their commercial zone. And so, instead of going through the whole conditional-use permit process, they got the approvals within two weeks.”

Royal Emerald is expected to begin operations at the site in late 2020. The company plans to build up to 3 million square feet of office and manufacturing space, according to Desert Pacific Properties.

Major players have had to scale back or reconsider their operations in recent months. Canopy Growth, for instance, pulled back on cannabis cultivation in Africa, Canada, Colombia and the United States. Los Angeles-based MedMen Enterprises closed five of its eight Florida medical marijuana dispensaries in May. Other multistate operators including New York-based Acreage Holdings and Arizona-based 4Front Ventures and Harvest Health & Recreation also have scaled back by laying off workers and disposing of operations.

The cultivator can build up to 300,000 square feet of grow space on its current land in Las Vegas. Phase One of the project is currently operating and consists of 34,000 square feet of cultivation, production and operational space.

“We build according to what the market demands at the time. And that’s how I run these projects,” Sassano said. “I always tell people to cut (development projects) back to a reasonable spend and develop management first.”

Property as an Asset

One real estate tool that is growing in popularity for struggling cannabis businesses or those needing to access capital is the sale-leaseback, Sassano said. (See “Cash Cow” in the February 2020 issue of Marijuana Business Magazine.)

Under this arrangement, companies often sell their cultivation, processing and storage facilities—and, in some cases, retail stores—to cannabis-focused real estate investment trusts, or REITs. In exchange for the upfront cash, the companies sign a long-term lease with their new landlord. After the agreement, such businesses are tenants in the properties they once owned. Sometimes the agreement includes a purchase option where the cannabis firm can buy back its property at prenegotiated prices.

“When you do that deal, the property is not owned by you. The building is not owned by you. It’s owned by the sale-leaseback group,” Sassano said. “If you keep making the payments and if, at the end, you’re able to pay off the balloon … well then that property reverts back to you. They’ll hand over the keys and do the title-deed transfer. And now you own your business outright.”

“I’ve never seen that happen yet,” he added.

Moreover, cannabis companies that want to expand too quickly can land in hot water by using the capital of the deal to temporarily shore up issues in their business—and eventually find themselves again pinched for cash.

Companies must weigh a sale-leaseback against their other options for capital, said David Lesser, chair and CEO of Power REIT. The real estate investment trust based in Old Bethpage, New York, owns and leases out cannabis cultivation facilities to licensed operators in Colorado and Maine.

“‘Sale-leaseback’ is kind of a buzzword. What we’re doing fundamentally is entering into long-term leases with operators, and that gives them the long-term runway to operate and grow their businesses,” Lesser said.

Businesses in the marijuana industry—thanks to the plant’s federal illegality—often end up paying a premium to lease their facilities, Lesser said.

“Typically, you see a high going-in rate with a big built-in premium for cannabis. And then, it just escalates from there,” he said. “I don’t think that’s sustainable, and hence, we’ve tried to take a somewhat different approach.”

Power REIT charges higher rent upfront to its cannabis tenants and then reduces the cost—typically in the third year. The leases also have a built-in reduction in the event of federal legalization, Lesser said.

Landlords can offset some of their concerns around marijuana businesses by charging higher rents. They can also tack on addendums to the lease to reduce liabilities and guarantee issues are addressed, experts say.

The most frequently cited concerns of landlords leasing to marijuana-related businesses involve smell from the site, risk of theft of cash on property, moisture issues and fire hazards, according to a National Association of Realtors (NAR) report published in February.

“It does seem like in states where marijuana has been legal the longest—so, legal before 2016—that commercial (realtor) members are more willing to both lease to and work with the cannabis industry,” said Jessica Lautz, vice president of demographics and behavioral insights at NAR.

Cannabis businesses struggling to make rent amid the economic downturn could talk with their landlords about payment deferment or forgiveness, Graff said. “Many landlords recognize that there’s a value to working with their tenants in the short term to ensure the continuity of long-term rental payments.”

Cannabis operators that find themselves unable to make rent going forward will have to review their leases for how to terminate their agreements with the least financial and legal obligations.

“Many lease agreements will have provisions concerning a force majeure clause that in the event of an act of God—which one might suggest, if not expressly state, that a pandemic would qualify as—would provide a right of termination. Furthermore, many leases will have clauses concerning the right for a quiet use and enjoyment by the tenant, meaning that they will have the continuous ability to operate out of that facility,” Graff said.

Cannabis operators that were deemed nonessential and/or forced to close by their state or local government officials might be able to make a case that their right to use their property was violated and their lease should be terminated, he noted.