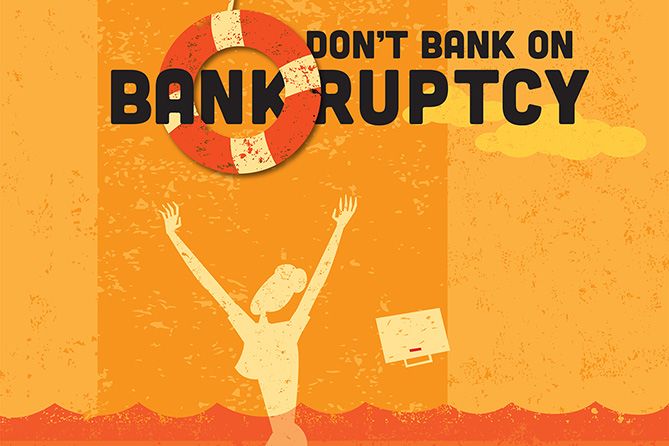 When attorney Charles Ferrari works with licensed marijuana operators to help set up their businesses, he warns them that federal bankruptcy likely won’t be an option.

“Candidly, if you’re involved in cannabis even tangentially, you’re possibly operating without a parachute,” said Ferrari, senior counsel for the ADLI Law Group in Los Angeles.

Thanks to the federal government’s marijuana prohibition, financially distressed cannabis-related businesses are in a bind when they need relief from creditors.

The U.S. Trustee Program, which is part of the Justice Department, has made it extremely difficult for even ancillary businesses to go through federal bankruptcy reorganization.

The agency has, in fact, increased its efforts to enforce federal marijuana bans in personal and business bankruptcy cases in recent years, according to data from the U.S. Trustee Program.

A recent federal appeals court opinion appeared to open the door for some ancillary businesses, but just by a crack. And most would find it hard to squeeze through.

“I think federal bankruptcy is mostly off the table,” said Laura Coordes, associate professor of law at Arizona State University.

But there are other options, experts agreed, and one of the most common is to go through a process where a state court-appointed or privately appointed receiver or reorganization specialist manages operations on a temporary basis until the business gets back on firmer financial footing, or until its assets are sold.

An even better option, especially for a small marijuana-related business, is if major creditors are willing to work through an informal restructuring outside a court process.

“There’s no reason why you can’t have an out-of-court restructuring,” Coordes said. “You don’t necessarily need to engage in a formal process.”

“State receiverships seem to be a big option for distressed operations,” Coordes said.

That’s generally a person appointed by a state court who “more or less takes over the business” to protect and preserve its assets, she added. In that case, the creditor has sued to put the business into receivership.

(Alternatively, a creditor and a cannabis-related business could mutually agree to bring in a reorganization specialist outside the court process.)

A receivership may lead to the liquidation of the business, Coordes said, but that is not always necessary.

“In some instances, the process is flexible enough to allow the business to continue to run,” she said.

Take the recent case of Guild San Jose, a licensed California cannabis business whose assets included a 23,500-square-foot facility with a medical and recreational dispensary and two indoor cultivation rooms.

The multistate firm Receivership Specialists served as the court-appointed receiver to manage the company’s operations and find buyers for the assets.

The business had been placed in receivership after defaulting on a loan for more than $1 million, and a state court ordered the sale of the assets.

Reflecting the effort to preserve value, Guild San Jose’s business continued to operate as buyers were sought, although auction documents show that total revenues declined from $695,208 in January 2018 to $416,593 in December 2018.

An initial buyer backed out, but Receivership Specialists was able to garner $8.25 million at an auction of the assets in June. The buyer was San Diego-based cannabis retailer Urbn Leaf.

A receivership does have drawbacks, experts said.

Creditors often initiate state receiverships, so they are protecting creditor interests rather than those of the troubled business.

By contrast, a federal bankruptcy reorganization is initiated by a company to protect itself from creditors while it reorganizes.

Seeking a court-appointed receiver involving cannabis is a novel concept in most states, Ferrari said.

Transparency issues also often exist in state receiverships. In a federal bankruptcy filing, by contrast, all documents are public.

That’s generally not the case in a state receivership, Coordes said. “The information can be difficult to get even for other creditors.”

Ferrari said another big issue with receiverships is the expense. It’s not unusual, he said, for receivers to command $15,000-$25,000 per month for relatively simple cases, and $40,000-$50,000 per month for more complicated cases.

“The reality is that if you’re not a big player, then that’s not a realistic option,” Ferrari said.

So, what possibilities are available for small businesses?

Experts advise companies to try to work with their creditors in an informal setting, outside a court process.

A cannabis-related business should start to think about that as soon as it runs into financial difficulties, Ferrari said, such as cash-flow problems or lower-than-expected revenue.

Such a business should go to its major creditors and see if it can restructure its payments or get temporary forgiveness on the debt. That’s easiest to do, though, when a business has only one major creditor, Ferrari said.

From a lender’s point of view, the process can be beneficial as well, said Mark Salzberg, a bankruptcy reorganization specialist for Squire Patton Boggs in Washington DC.

“I also work with lenders, and lenders need to recognize that no one wants to see their borrower go into bankruptcy,” Salzberg said.

Ferrari said a cannabis-related business will need to show to its creditors that it “has recognized why it’s not making money and has a plan that’s workable, that will pay back the creditor and make a profit for the business.”

Creditors, he said, may seek additional collateral such as a personal guarantee by the business owner to repay a debt, which could put that owner in a precarious financial position.

When a creditor takes the lead, often the agreements (including interest rates and late fees) can be so onerous that a business owner won’t be able to comply, will lose the business and, perhaps, even a portion of his or her personal assets, Ferrari said.

He recommends hiring an attorney just for that transaction, to ensure the agreement with the creditor isn’t unrealistic.

Chances are the creditor is doing the same.

Salzberg, for example, advises lenders to cover their bases from the beginning when signing contracts with cannabis-related businesses.

He said that should include negotiating security for the loan or other arrangement and detailing what the next step would be if certain adverse financial events occur.

Such an agreement could spell out the creditor’s rights to put a company into receivership, he noted.

“Lenders need to think how to protect their interests and build in those protections in the loan documents,” Salzberg said.

However, in a financially bleak situation, there are plenty of circumstances in which a lender might be willing to take an asset off its books, even if it isn’t getting the full value back on that asset, according to Salzberg.

Is there any opportunity for a cannabis-related business to file for protection from its creditors under federal bankruptcy laws?

Salzberg said that U.S. trustees typically get rid of federal bankruptcy cases by arguing that they can’t administer marijuana assets because that would violate the federal Controlled Substances Act.

Here’s the issue in a nutshell, according to Ferrari: It is a violation of federal law to knowingly or intentionally manufacture, distribute, export or import “any equipment, chemical, product or material which may be used to manufacture” cannabis.

Ancillary businesses also can violate federal law and thus not qualify for federal bankruptcy simply by aiding a business that is processing, distributing or selling cannabis.

Way to Grow sold its equipment to cultivators of various crops, but many customers were marijuana growers, and any future growth of the company was dependent on those sales.

But federal courts treat issues a bit differently, depending on the jurisdiction, Ferrari said. It’s particularly tough to get protection in Colorado, he said, while it’s a bit easier in California, Oregon and Washington state.

One key issue is whether a business can put together a viable reorganization plan that doesn’t involve revenue from a cannabis-related venture, Ferrari said.

Still, it can get fuzzy.

For example, a business that sells hats, clothing or accessories such as jewelry would seem to be operating in a safe harbor and could file under federal bankruptcy law.

But if that business is selling those items to marijuana retailers, then there could be a problem, Ferrari said.

There can be ways around that, however. For example, a business that peddles rolling papers might qualify for bankruptcy protection if it’s selling to head shops rather than to marijuana retail stores and dispensaries.

But ultimately, marijuana-related companies, including ancillary businesses, must recognize that federal bankruptcy isn’t a likely option until state marijuana businesses are deemed legal on a federal basis, cannabis experts said.

And, as cannabis industry executives know, that may be awhile.