At 24, Hillary Peckham is probably one of the youngest chief operating officers in the cannabis industry. She’s also confronting a medical marijuana market that’s one of the of the toughest in the nation – one that began at a snail-like pace.

Etain has one cultivation site and four dispensaries: in Albany, Kingston, Syracuse, and Yonkers. The company is one of five MMJ license holders in New York. Peckham launched Etain with her mother and sister.

New York’s MMJ market got off to an excruciatingly slow start when it launched Jan. 7: A mere 51 patients registered to buy cannabis.

By late March, only about half of the roughly 2,000 patients deemed eligible to buy cannabis had done so. As of May 9, New York’s medical marijuana program had 3,549 patients, while 564 physicians had registered for the program.

Marijuana Business Daily spoke with Peckham recently – before the May 9 patient and doctor numbers were released – about leading a company in a challenging market. Topics ranged from keeping costs down to attracting patients.

How did you pick the locations for your dispensaries?

The application was scored based on geographic diversity. You got more points for disbursement of your dispensaries. That factored into our plan.

But we wanted to focus on areas outside of New York City. We wanted places where we knew it was encouraged.

My mother and I spent a year going to different municipalities talking to local government to make sure they wanted it. So we wound up in places that wanted us.

We tried to make sure we covered as much of the state as we felt we could handle.

We also tried to choose areas where the municipalities were encouraging economic development, to try to make an impact that way.

We were trying to meet the application’s guidelines but also trying to do something good for the communities.

How did you find employees?

Because we work as a start-up, we are perpetually understaffed. We were looking for someone who sees the future of this industry and is willing to grow with us, because we are trying to keep this as lean as possible until the market grows.

At the cultivation facility, we try to hire local people with agricultural experience, and for harvest we’re hiring women who (left jobs to take care of kids and now) are trying to get back into the workforce. We’re trying to support that community because they really support us.

Hiring locally also promotes normalization of the industry within the community, because people can see what we’re doing.

We also have a part-time harvest program, where people will work a couple weeks out of a month and earn between $300 and $500, depending on how much they work.

We’re really looking for people who understand that this is for a compassionate cause.

The New York market is suffering partly because of a lack of doctors and in turn a lack of patients. How do you deal with that?

I think it’s important to remember where we were when our doors first opened. There were about 50 patients and 50 doctors registered. And now we’re nearing about 3,000 patients and 500 doctors.

So when you look at what’s happened in just three months, it is pretty huge growth, and growth you don’t generally see in other medical states. I think there are people who are struggling with access, but it is growing. I’m not disappointed.

I wish there were more ways our company could do outreach because right now we’re limited. We’re not allowed to market, and that would really help us educate communities.

But I think that will come over time, and I am encouraged by the work that the department of health is doing to try and make this program successful.

What do you do in terms of patient outreach?

A lot of patients are having a hard time finding a doctor who can recommend for them, and we can’t recommend a doctor to a patient. But we can put patients in touch with other patients.

ADVERTISEMENT
Is the prohibition on smokable cannabis a challenge? Do patients ever ask for it?

The New York program’s intention is to treat this as a pharmaceutical. I’m not of the opinion that dried flower is the cleanest way to consume cannabis. You are allowed to vaporize oil, so we offer vaporizers.

The vaporizers are a great option for people who like smoking. We see a lot of people who have black market use, and (smoking) is the way they’re used to consuming. Inhalation is a great and effective way of ingesting the medication, and a pure cannabis oil is something that’s very safe.

We’re also seeing people who have used black market cannabis to treat their symptoms, but are willing to try these products because they want to do this in a legal way.

But there’s a lot of education that needs to be done, especially about dosage, and we counsel first-time patients for about 45 minutes.

What are your most popular products?

It really is different based on each dispensary and the physicians in the area. There’s a community of people who treat epilepsy near one of our dispensaries, so they primarily see CBD products.

Another dispensary focuses on pain management for people with neuropathies or spinal cord damage. There we see a lot of high THC, because of the pain. And then generally the one-to-one CBD to THC is very popular, because it’s a good introduction for people to see what our products can offer.

Have you reached the number of patients you need to be sustainable?

No, definitely not. We need about 1,500 patents per month to be sustainable, but we would hope to see somewhere between 1,500 to 2,000 patients per month. The goal is to cover costs.

How do you keep costs down?

Our whole philosophy has been grow with the market, rather than overbuild and wait for the market to grow.

We have only a couple of pharmacists who commute between the dispensaries, which are open only part time, until there’s enough demand to expand.

Have you been able to establish a banking relationship?

Yes, that’s something we tried to establish prior to the application, so it hasn’t been a problem. 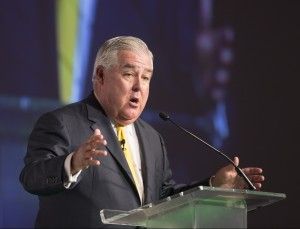