(This story is part of the cover package in the November-December issue of MJBizMagazine.)

Pre-rolls were once counted as part of the marijuana flower market.

But over the past few years, they have become viewed as a distinct product category.

“In terms of relative sales growth, comparing Q1 of 2020 to Q3 of this year, the pre-roll category has the highest growth,” said Cooper Ashley, analytics manager at Seattle-based data firm Headset.

This change has been driven by the introduction of a greater variety of pre-rolls as well as the consumer dollars that are being spent on them. 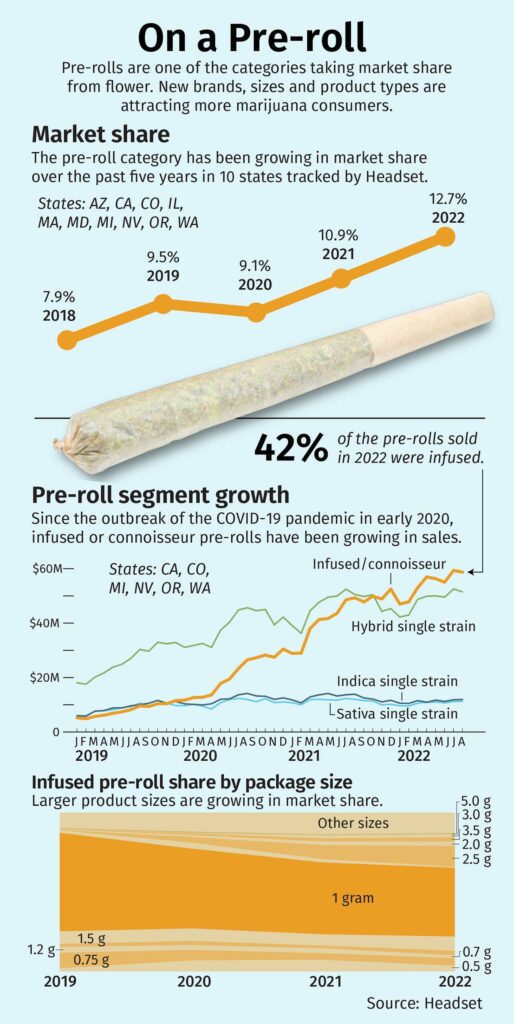 Just a few years ago, pre-rolls were almost exclusively sold as 1-gram singles.

They also are sold in two-packs, five-packs, 10-packs and other quantities.

Giving consumers more and different options in pre-roll sizes allows them to pair a pre-roll with the occasion.

“Smaller-sized pre-roll packs have also spread across the nation, with brands like Miss Grass, Lowell Smokes and Dogwalkers on the trend,” Madeline Scanlon, an analyst with the Brightfield Group, a cannabis market research firm in Chicago, told MJBizMagazine via email.

“In the U.S., we see a lot of two- or four-packs and still a huge number of single pre-rolls. Canadians have taken to bulk-buying pre-rolls.”

In Michigan, many retailers are manufacturing and selling their own “house” pre-rolls.

Premiere Provisions in Big Rapids, for example, buys shake or trim from growers and then uses a Knockbox cone-filling machine in the back of the store to make the pre-rolls, which are sold up front after being manually weighed.

The growing popularity of pre-rolls also has been fueled by infused versions.

Headset refers to these products as “connoisseur” pre-rolls, which are infused with or dipped in concentrates such as wax, rosin and other marijuana concentrates.

“The trend line is just straight up. They have grown so fast in comparison to other segments within that category,” Ashley said of infused pre-rolls. “We’re looking at easily a five-times increase since January 2020.”

Lance Mathis, store manager at Inyo Fine Cannabis Dispensary in Las Vegas, said of Catacombs, a brand of pre-rolls that are infused with rosin and other concentrates: “I can’t keep them on the shelf, no matter how much I order.”

“They fly so fast because they’re very consistent. They taste good. It’s just a very high-quality product, and it is priced to sell,” he said.

Stingers by AMA, another pre-roll brand that Inyo carries, once retailed for $40 but now sell for $15-$30, depending on size. Mathis said the AMA pre-rolls do well because it’s “good flower and priced to sell.”

Sanctuary Medicinals, a vertically integrated multistate operator that does business in Florida, Massachusetts, New Hampshire and elsewhere, is working on its own line of infused pre-rolls.

“We definitely noticed the response that consumers and patients had to the infused pre-rolls,” said Jake May, director of marketing at Sanctuary.

“We’re thinking about what the next brand might be and how to stand out in the market.”

Companies now scrambling to create infused pre-roll brands “feel like they’re missing out on that market,” said Mathis at Inyo.

“It’s a market on its own. I’m just constantly chasing them, keeping them reloaded. Customers will come in the door and specifically only ask for infused joints. And if we don’t have them, they’re going to go somewhere else.”

Mullen of Seattle-based Cannabis City noted that pre-rolls infused with live resin are more popular than those infused with distillate—a trend he’s noticed with other products, too.

“People are more educated now about concentrates, terpenes, other cannabinoids. That’s why I think infused pre-rolls are moving so well now,” Mullen said.

“Vendors are adjusting their products and moving more toward a cannabis connoisseur customer base who are educated.”

“The level of sophistication has really increased, both in branding and in this repeatable experience,” he said, adding that successful brands include Sublime, Fuzzies and Jeeter.