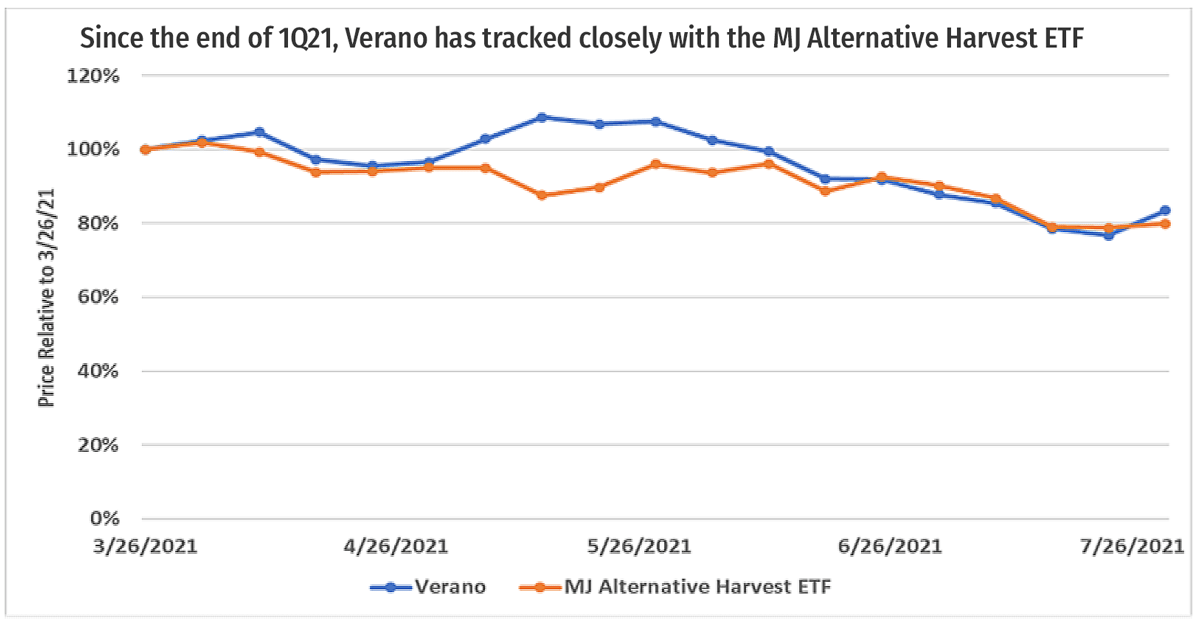 Through the deal, Illinois-based Verano will expand its Nevada operations via:

Verano is paying $29 million for Sierra Well, utilizing a mix of $5.6 million in cash and 1.54 million shares of Verano stock.

The 19.3% cash consideration is above the average 11% cash calculated in the Viridian Deal Tracker for closed cultivation and retail deals in 2021 but significantly below Verano’s average of 51% cash for completed 2021 acquisitions.

Verano has been on an acquisition spree in 2021, so it wouldn’t be surprising to see the company access the capital markets to raise additional capital.

A recent Viridian Chart of the Week projected a second-quarter cash balance for Verano of $73 million, the lowest cash-to-market cap ratio among the top multistate operators.

The chart below shows the transaction to be 1% accretive to the company’s EBITDA per share. It’s too small to move the needle much for Verano, but the company could have paid up to 12.6X Sierra Wells’ EBITDA before the acquisition would become dilutive.

Verano trades at 8.0x 2022 consensus EBITDA, a discount to the median of 10.0x for the 11 cultivation and retail sector companies with more than $1 billion market cap tracked in the Viridian Capital Value Tracker.

Verano is the third-largest company in the group by market cap and has the highest projected EBITDA margins.

Despite its apparent undervaluation, Verano stock has closely tracked the MJ Alternative Harvest ETF since the end of the first quarter 2021. (See top chart.)

As the growth prospects of the cannabis industry increasingly resonate among a broader base of investors, accessing capital remains a challenge for plant-touching businesses.

Passage of the SAFE Banking Act could eliminate some of this, but it wouldn’t guarantee that cannabis companies qualify for funding.

Because of the limited options available, special purpose acquisition companies (SPACs) have gained notoriety as a viable alternative.

As of July 30, GreenWave Advisors estimates that SPACs have raised more than $3.6 billion through IPOs earmarked for cannabis, of which $1.8 billion has been “de-SPAC’d” (i.e., a qualifying transaction has closed and company now publicly trades as its own legal entity).

Some benefits of the SPAC structure include:

SPAC investments are inherently complex, and they’re even more so for cannabis businesses as each state operates within a closed economy while under the shadow of federal laws.

But they also could present a more favorable risk/reward profile for cannabis than other sectors, given the industry’s growth trajectory.

Typically, a SPAC seeks a target with a valuation at roughly 3X-5X the amount it holds in trust (IPO amount).

Currently, GreenWave estimates that 10 cannabis SPACs with proceeds totaling about $1.6 billion have yet to announce a target. This equates to a total implied acquisition capacity of roughly $4.8 billion-$8 billion, with an average deal size of $480 million-$800 million to flow into the public markets.

The challenge is finding targets that fit within these valuation parameters, which has led some to opt out of searching for a cannabis target all together.

While SPAC sponsors continue to come under fire for a disproportionate share of a deal’s economics, investors also have the potential to benefit from outsized returns.

As illustrated below, in general, the less redeemed, the greater the return.

An example of this is Ayr Wellness, which de-SPAC’d more than two years ago. There were virtually no redemptions, and the gain (excluding in-the-money warrants) stands at more than 188%, equal to a compound annual growth rate of 63%.

Conversely, MTech Acquisition Corp., which closed around the same time, returned about 89% of its IPO proceeds and is down 66%. For many other entities, the time frame (less than one year since deal closing) is not sufficient to draw any meaningful conclusions yet.

The table below provides a simplified snapshot of the associated returns.

Ownership structures of SPACs are generally thought of as egregious and not commensurate with the capital invested.

However, investors can still achieve significant alpha by choosing the right “jockey” (management team) over the “horse” (company).

Understanding the magnitude of a SPAC’s redemptions before investment can provide some insight into the risk-return profile.