Here’s a closer look at notable developments in the marijuana industry over the past week.

The final day of the 2015 Spring Marijuana Business Conference and Expo, which drew more than 2,100 cannabis executives from 41 states to Chicago this week, included hours of expert panels touching on subjects ranging from commercial cultivators’ operational challenges, to the pros and cons of cannabusiness IPOs, to surprising forecasts of when federal legalization may become a reality.

For example: If commercial growers want to remain competitive long-term, they’ll have to focus on refining operations and developing lean manufacturing practices, according to Mitch Stern of Burning Bush Nurseries in California.

“Find the one thing you do perfectly, do it over and over again, and put systems in place to teach someone else how to do it,” Stern advised.

Branding is going to be another critical component of long-term viability, according to show speakers. “(The) days of growing weed and shipping it in three-gallon bags to dispensaries are coming to an end,” said Jay Czarkowski, of Canna Advisors in Colorado. He emphasized the importance of a recognizable brand and consistent customer experiences as a strategic pillar for success.

As more and more companies are looking for capital to launch or expand operations, there’s been a parallel uptick in the number of cannabis firms that have gone public. In 2012, just 13 marijuana-related companies were publicly traded. Now there are over 250, said Scott Greiper, president of Viridian Capital.

While going public has worked well for some, there are also plenty of cons, said Derek Peterson, CEO Terra Tech. Once a company is public, he said, the founder is usually forced to relinquish a lot of control that private company owners still enjoy. Public companies have shareholders to report to, he emphasized.

“My advice is always, stay private if you can,” Peterson said.

On the other hand, he admitted, he might not have been able to raise millions needed to expand Terra Tech if he had kept the company private.

Cannabis investors are different from those in other spaces, according to Khurshid Khoja of Greenbridge Corporate Counsel. Khoja got cheers from audience members when he added, “This industry is a social enterprise. (Cannabis investors are) contributing brick by brick to the dismantling of prohibition.”

The conference came to a close on an optimistic note, with three panelists making the stunning prediction that medical marijuana will be legalized by the federal government within the next two years. One panelist, Brendan Kennedy of Privateer Holdings, even suggested that Congress will legalize both recreational and medical by 2018.

Victory or Defeat in Texas?

It’s not unreasonable at all for medical cannabis advocates in the South to be disappointed with Senate Bill 339, since the measure, which was passed by the legislature this week, is essentially just a symbolic win.

The bill, while touted as an opening for those with severe epilepsy to obtain CBD treatment, has a major problem: It requires doctors to prescribe MMJ formally (rather than recommending it or helping with patient card paperwork) , which no doctor in the U.S. can legally do because it’s still federally illegal.

ADVERTISEMENT
So why celebrate? Because the marijuana movement should know by now that cannabis reforms have been enacted one baby step at a time for more than two decades. The fact that a MMJ bill wasn’t dead on arrival in the conservative Texas Legislature is arguably a major step forward in and of itself. The bill passed the Texas House of Representatives 96-34, and in the state Senate 26-5.

Texas isn’t alone in having passed largely unworkable CBD laws that are little more than gestures of support for families with epileptic children. A dozen other conservative states have passed similar measures, including Alabama, Utah, Tennessee, and more. Georgia this year legalized the use of CBD oil but didn’t include any method of production or delivery, so families will be forced to break the law by acquiring such oils in other states and then driving home to get medicine to those who need it.

The final takeaway, in other words, is there’s still a lot of work to be done.

Massachusetts dispensary applicants that were denied licenses when they first applied are getting ready to resubmit their applications, and this time the system will be more streamlined and transparent.

At least, it’s supposed to be.

Under new rules passed last week, dispensary license applicants will be judged on merit rather than being graded against competitors. The licenses themselves also will change and be similar to those given to pharmacies, and more health department staff will be made available to help applicants with questions. Would-be business owners can start applying for future licenses on June 29, and applications will be considered in the order they’re received.

A law passed in 2012 legalized MMJ in the state, but no dispensaries have opened as regulators crafted rules and awarded provisional licenses, then faced about two dozen lawsuits questioning the lack of transparency in the process, the way applicants were scored and problematic background checks.

The new rules, hopefully, will solve those issues, DPH officials said. But only time will tell if the second go-round will prove smoother than the first.

“We are pleased to see that the DPH has retained high standards for dispensaries that will foster a responsible, professional industry,” said Kevin Gilnack, the executive director of the Commonwealth Dispensary Association, which represents nine of the dispensaries that received provisional licenses.

The regulations also will tell applicants denied due to background checks what exactly caused officials to say no, and will be allowed to remove the person failing the check from the company’s application, according to the Boston Globe.

Jim Smith, a Boston attorney representing a Colorado company that was initially awarded two provisional licenses before having them pulled for questions about the company’s local support, said his clients will reapply, and called the new system “much more open and fair.”

Still, the big question for business owners and patients is when dispensaries will open.

Just two dispensaries are poised to open in coming months. Alternative Therapies Group has started growing MMJ, and once it’s ready to open it’ll need to get a final approval from the state, a health department official has said. New England Treatment Access has received approval to begin cultivation and may open in the fall.

Becky Olson can be reached at becky0@mjbizmedia.com

Chart of the Week: Marijuana Business Entrepreneurs Predict Their 2017 Valuations 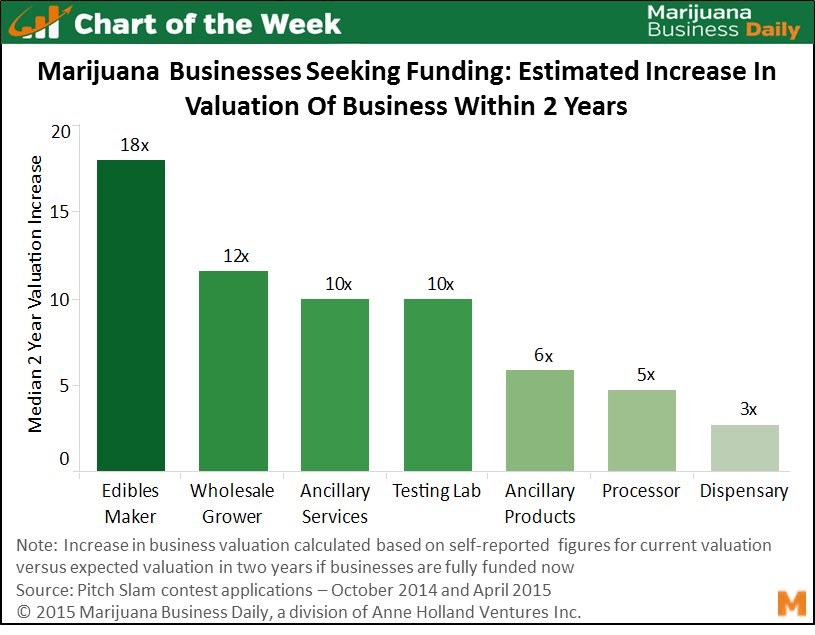