No Sovereign Immunity After All

Federal agents sent about as strong a message as they possibly could this week to Native American tribes looking to get into the cannabis industry: do it right, or we’ll shut you down.

Agents from both the Drug Enforcement Administration and the Bureau of Indian Affairs raided a pair of grow sites on tribal land Wednesday in northeastern California, signaling that the federal government won’t be completely hands-off when it comes to cannabis on reservations.

Still, several insiders who are working closely with Native Americans interested in the cannabis industry said these two small tribes brought the raids on themselves.

“I heard about this a few weeks ago, and we knew this was not going to end well,” said Lael Echo-Hawk, a Seattle attorney involved in tribal interests tied to the marijuana industry. “This is a very, very big deal, and it sends a message loud and clear that the DOJ is not going to let tribes – or anyone – not complying with (the rules) get into this industry.”

Echo-Hawk said it seems clear from her vantage point that the cannabis being grown at the two sites was bound for areas outside tribal lands, and that the management was being “irresponsible” by not following federal guidelines for tribal marijuana commerce.

ADVERTISEMENT
Demitri Downing, another attorney and a board member of the National Indian Cannabis Coalition, said he hopes the raids won’t deter other tribes from entering the cannabis space, but that he knows a lot of tribal leaders are taking the raids seriously.

“It is making tribes think twice,” Downing said. “This probably wasn’t (the feds’) intention, to throw a cold blanket on the whole thing, but that was the end result.”

Florida closed its application period this week for the five licenses it will issue next month for nurseries that want to grow and produce CBD medicine in the state – a tangible step forward for a program fraught with delays.

The state said 24 companies applied for the licenses, which is more than some observers had expected.

Several companies that had previously planned on applying balked instead when a state initiative failed at the ballot box last year to institute a much broader medical marijuana program, saying that the cost and administrative hurdles were prohibitive.

Florida now appears on track to become the first Southern state with a workable CBD program. It’s also one of the only states in the nation – along with Missouri – with CBD laws on the books that actually provide both business opportunities and medicine for patients.

Other states that approved CBD-based medicines haven’t set up systems to actually produce and distribute the products, making the laws ineffective.

Although the Florida law allows for just five business licenses, the companies that win those permits could have a fairly large market to tap given the state’s heavy senior population.

The program’s progress could have a larger impact in the state as well. A wider medical marijuana initiative is expected to appear again on the ballot next year, and a successful rollout of the CBD program could boost support for that measure.

Industrial hemp cultivators scored a major victory in Oregon this week when the state Senate killed a measure that would have revoked all 13 state licenses for cultivation and placed a two-year moratorium on growing, mostly based on concerns over cross-pollination with outdoor marijuana farms.

So what does this mean for MMJ growers in the state?

Not much, hemp experts say.

Beckerman pointed out that even on windy days, the furthest that hemp or marijuana pollen would travel would be 200 yards. If pollen were carried by bees, she said, the range would likely be just three miles.

Courtney Moran, founder of the Oregon chapter of the same association, said she couldn’t be sure how close some hemp farms are to medical cannabis cultivation sites in her state. But she said the concerns of cross-pollination came from clusters of MMJ cultivators in southern Oregon, even though there are a number of hemp and marijuana farms in the eastern region of the state.

Moran said that marijuana and hemp have been grown in Canada for years without cross-pollination becoming a serious issue, and she doubts it will present any real problems in the U.S. either.

Regardless, she said, she knows many of the hemp farmers have agreed to take reasonable precautions to ensure that their crops don’t accidentally cross-pollinate with marijuana and thereby dilute the potency of the marijuana harvest. 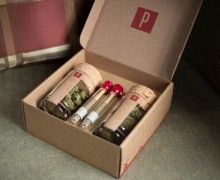