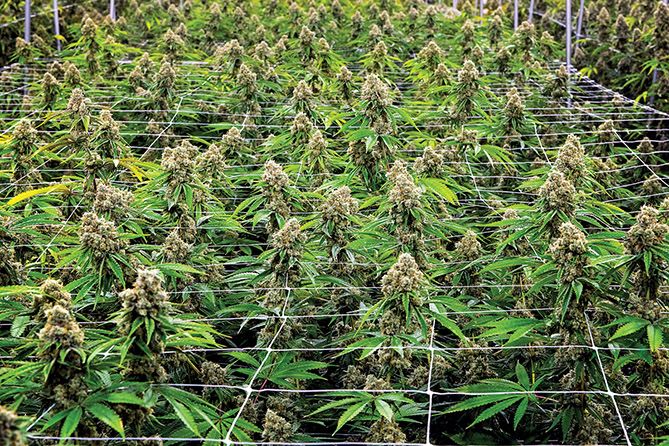 With traditional agriculture commodities such as corn or soybeans, it’s common for farmers to try to hold on to their crops until the market offers a better wholesale price.

ADVERTISEMENT
But marijuana cultivators aren’t inclined to store their flower for months at a time if the wholesale price bottoms out, as has happened in California, Colorado, Oregon and other markets over the past several months. The quality of the plant deteriorates, making it harder for growers to sell their crops to retailers and manufacturers.

Plus, most grow operations don’t have the capital to sit out a glut. Electrical bills and rent, for starters, are due every month.

Plant matter and cannabinoids degrade, and the harvest date on the label is a giveaway that the product has been sitting on a shelf. In a market with too much cannabis, no one’s buying the old stuff.

“Cannabis is like A/C units and ice cream,” said Joshua Haupt, master grower and chief revenue officer at Medicine Man Technologies in Denver. “You sell a bunch in the summer.”

What can a marijuana grower do when the market hits peak saturation—often immediately after the fall outdoor harvest—otherwise known as “Croptober?”

Industry officials who have experienced a glut firsthand say cultivators trying to survive should consider the following:

“Most of these businesses have very weak balance sheets, and one bad harvest can put them under,” said Wes Matelich, CEO of RX Green Technologies, a supplier of nutrients, substrates and other cannabis inputs with offices in Denver and Londonderry, New Hampshire. “Knowing where you can flex is key to surviving.”

‘Live in Your Numbers’

To figure out where a business can “flex,” Matelich recommends benchmarking every aspect of your business—from payroll to electricity bills—and monitoring those numbers closely.

“The real key to surviving is living in your numbers and making decisions on where you can generate the largest net dollar return,” he said.

To Matelich, labor costs are one of the main areas a business owner can evaluate to ensure workers are providing the most value.

“View your entire payroll to make sure that your labor isn’t inflated,” he said.

To determine that, compare the salaries and wages of your employees to market averages in mainstream companies outside cannabis. Then, measure performance based on the internal goals, such as grams per square foot or pounds per light, which can be set higher than the competition’s mark.

Haupt suggests striving to pay a wage consistent with the market average while employing workers who achieve the company’s goals.

A cannabis company’s labor costs should run around 18%-20% of its overall business expenses, he said.

Once you find those workers who can perform well at a reasonable cost to your business, do what you can to hold on to them, said Jesse Peters, a Portland, Oregon-based cannabis veteran and CEO of Mantis Growth Investments, which produces both cannabis and hemp-derived products.

“Turnover is expensive,” Peters said. “Finding people who are skilled and loyal and dedicated in this space, they’re a real commodity.”

If the market nosedives and the company is struggling to make ends meet, Peters advises that senior management temporarily forgo their salaries rather than make the lower-salaried workers go on furlough.

“Being able to bring your bottom line down and not lose your humans is really important,” he added.

One way to protect against a major disruption such as a tanking market is to develop a list of smaller buyers instead of just one or two main clients.

“If you just have one big client, you’re giving them all the power of negotiation in the world,” Peters said. “They know you’re paying the bills with their money.”

If you have multiple clients and you lose a customer or one goes out of business, you won’t suffer as much financial strain.

Not only does having more clients provide insurance against a buyer drying up or disappearing, it gives companies more leverage in negotiating crop price.

Peters gave this example: Say your sales representative tries to offload 10 pounds of marijuana for $2,000, and a buyer says, “I’ll give you $1,600.” Your rep can say: “I have four stops after this, and they’ll all take it for $2,000.” In short, more clients equal more negotiating power.

Matelich agreed. If a customer owns more than 10% of your profit and loss, then they have a lot of control over you, he said.

Matelich recommends not allowing any one customer to account for more than 5% of business, which works out to at least 20 client relationships.

“It allows you to drive price, because there’s all this diverse demand through your products,” Matelich added.

Haupt’s advice lines up with all of that. He likes to work with smaller, independently owned businesses rather than the Walmarts and Costcos of the marijuana industry.

“You’ll notice that the big guys will beat you up on price because they’re going to grab so much of it,” he said.

“It helps with the bargaining power,” he added.

Another piece of advice for dealing with buyers: Take care of your customers. In July, when the supply is low and demand is up, retailers will be looking around for product.

If you don’t gouge them, they’re more likely to give you a fair price in November, when the market is flooded with product.

Looking ahead to a season of oversupply—typically the late fall in markets with outdoor-grown cannabis—Peters recommends setting up a futures contract with a manufacturer.

A smart play is to get a buyer to prepurchase your product. The buyer might get the product for a slight discount because he or she is paying up front.

But Peters recommends not going out beyond 90-120 days.

“Don’t make a futures contract for a year,” he said. “By the end of that year, somebody’s price is wrong.”

But make sure you’re contracting with the right buyer.

“One warning,” Peters said. “If you don’t trust the people you get into a futures contract with, just don’t do it.”