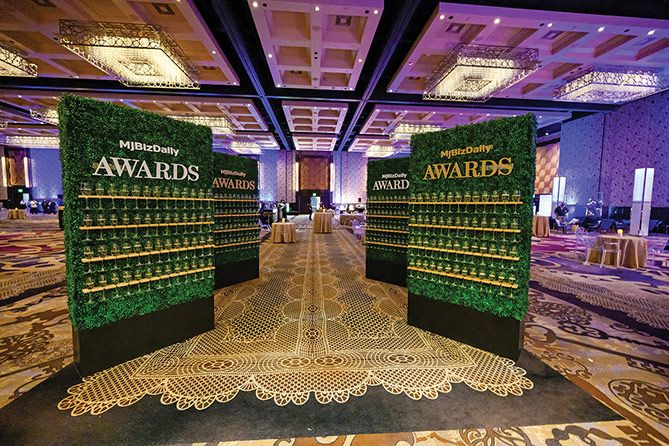 Some of the cannabis industry’s most recognizable faces turned out Dec. 12 for the MJBizDaily Awards at The Cosmopolitan Hotel in Las Vegas.

The awards gala honored everyone from businesses considered international “game changers” to U.S. leaders in retail, cultivation and infused products—plus companies notable for their contributions to hemp, sustainability and giving back to the community.

Finalists in each category were culled from hundreds of nominations submitted by cannabis industry professionals. The staff of Marijuana Business Daily helped narrow the field of contestants for the judges.

Here we highlight the winners and share what prompted judges to cast their deciding votes.

Since co-founding Wana Brands in 2010, Nancy Whiteman has grown the company to the No. 1-selling edibles brand in the country. She was responsible for expanding Wana from its Colorado base to Arizona, California, Illinois, Michigan, Nevada, Ohio and Oregon, with plans to move into Florida, Maryland, Pennsylvania and Canada as well.

Planet 13
Las Vegas
Planet 13 accounts for nearly 10% of all Nevada dispensary sales, and in a short time, its superstore has become a must-see destination for cannabis enthusiasts visiting Las Vegas. In addition to interactive light displays and Instagrammable settings, the retailer carries more than 450 products ranging from flower and pre-rolls to vaping materials, edibles, extracts, topicals, tinctures and gear.

East Fork Cultivars
Takilma, Oregon
With a deep commitment to science-based education, East Fork Cultivars is not only a market leader but an industry thought leader. The sun-grown cultivator founded by Nathan and Aaron Howard in 2015 uses techniques such as Korean natural farming and companion planting and breeds CBD-rich cultivars to create superior plant-based medicine.

Wana Brands
Boulder, Colorado
In 2019, the Wana Brands product suite grew beyond its signature line of infused gummies to include a line of disposable vaporizers, extended-release capsules, 5-milligram chewable tablets and a rapid-onset tincture. Wana was one of the first companies in the cannabis industry to adopt Good Manufacturing Practice standards. It ensures consistency by conducting full quality-assurance audits four times per year.

Cresco Labs
Chicago
With the goal of changing the public perception of cannabis, Cresco Labs has developed a professional, process-oriented business with a consumer packaged goods approach. The company enlisted James Beard Award-winning chef Mindy Segal to craft its infused edibles and recently streamlined its multistate retail outlets to provide shoppers with a consistent experience no matter which location they’re visiting.

PharmaCielo
Toronto
With 1.2 million square feet of open-air greenhouse capable of producing 5.6 million kilograms of cannabis flower per year, PharmaCielo has more than 20 proprietary strains under license by the Colombian government. The company provides telemedicine services to thousands of Colombian patients via Ubiquo Telemedicina, a subsidiary of PharmaCielo that connects physicians and patients.

Bedrocan
Veendam, Groningen, Netherlands
Bedrocan’s pharmaceutical-grade medicinal cannabis is used by patients worldwide. In 2018, Bedrocan grew more marijuana for export than all Canadian cannabis exports combined. The company is the exclusive provider to the Dutch Office of Medical Cannabis, which supplies domestic pharmacies and exports Bedrocan’s standardized products to countries across Europe as well as the Middle East and Australia.

Front Range Biosciences
Lafayette, Colorado
Front Range Biosciences works with partners in California, Colorado, Wisconsin and Barcelona to help growers achieve their yield and potency goals. This company is in the process of adding a tissue culture laboratory and research facility in California, and its “clean stock” program was created to reduce the need for pesticides and prevent soil depletion.

Giving Back to the Community

Berkeley Patients Group
Berkeley, California
Since its founding in 1999 by a group of HIV/AIDS and cannabis reform activists, Berkeley Patients Group has been involved in nearly every state and local policy initiative and legislative reform effort in California. The dispensary is also a regular contributor to a variety of social causes and organizations such as Americans for Safe Access and the Helping Hands program.

Native Roots Cannabis Co.
Denver
In 2019, Native Roots adopted new cultivation vessels to minimize the amount of soil needed to grow each marijuana plant. The company also transitioned its 1-gram and one-eighth containers to Calyx, a recyclable packaging that uses an enzyme to break down in landfills when not recycled, saving about 600,000 containers per year.

Before becoming the first black woman in Colorado to own a licensed dispensary, Wanda James was an officer in the U.S. Navy, owned three restaurants and served on President Barack Obama’s 2008 National Finance Committee.

A decade into her career in the legal marijuana market—with entrepreneurial ventures including a dispensary, edibles company and consulting firm—James is on a mission to ensure that minorities have an equal opportunity to participate in the marijuana industry.

Leading up to the MJBizDaily Awards, Marijuana Business Magazine sat down with James to learn about her trailblazing work in the cannabis industry.

How big of a risk was starting your business?

The risk in starting a cannabis business back in 2009 meant that you were taking your freedom into your own hands. In 2009, for a black person to stand up and say, “I’m going to sell legal weed in my state,” meant that you had to have three senators, four congressmen and a bevy of lawyers on speed dial.

What did you see about the industry early on that other people didn’t see?

What I knew about the cannabis space early on was that legalization was coming faster than anybody else knew. The reason why I’ve known that is because since I was 16 years old, I had been getting elevated. And the people that I have been getting elevated with over the past 30-plus years are doctors, lawyers, elected officials and very, very wealthy people.

Because so many people were using cannabis illegally, I knew that, once we gave them the opportunity to go legal, and once we were able to show politicians the taxation and jobs it created, this industry was going to flip—and I knew that it was going to flip quickly.

What have been some of your biggest challenges?

I would say the hardest thing that we deal with is the fact that we operate a legal business within an illegal structure. So, clearly, no banking. Fortunately for Simply Pure, we do have a legal bank account, but it’s more of a depository. We don’t have access to lines of credit, access to credit cards. We don’t have tax breaks that any other industry that brought 40,000 jobs to Colorado would immediately get.

What have you accomplished that’s made a difference in the industry?

And, most importantly, we have been a vehicle to stop police harassment in black communities because of simple possession.

What have you done to promote social equity and social justice?

Simply Pure is the voice to make sure that, at least in this industry, we’re going to be heard to say black and brown ownership must happen. We put ourselves on the line a lot, and I probably burn a lot of bridges because I fight so hard for social equity, social justice and for black and brown people in the industry.

(This interview has been edited for length and clarity.)
– Margaret Jackson

For anyone who’s been involved in the cannabis industry for any serious amount of time, Steve DeAngelo needs no introduction. The “father of the legal cannabis industry,” as he’s known in some circles, co-founded three businesses that helped pave the way for the modern U.S. marijuana industry: the medical and recreational retail shop Harborside, the testing laboratory Steep Hill and angel investment firm The Arcview Group.

Marijuana Business Magazine spoke with DeAngelo before his induction into the MJBizDaily Awards Hall of Fame.

The objective was to create a gold standard for cannabis retail and to prove to the world that cannabis could be distributed in a way that brings benefits to communities rather than harm.

Before I opened Harborside, I asked every commercial laboratory in the Bay Area to test our cannabis, and they all refused. So we had to start our own laboratory. That allowed Harborside to become the very first dispensary anywhere to sell tested cannabis products, to be able to identify things like a CBD-rich formulation versus a THC-rich formulation.

As Harborside began to grow, I began to be approached by other people in the cannabis industry who had heard about our success who wanted my help in finding investors and helping their businesses grow. And that led me to form The Arcview Group in partnership with Troy Dayton.

What have been the biggest hurdles for you over the years?

The most famous battle happened in 2012. Federal prosecutors knew that it might be their last chance to roll back legal cannabis. And so they launched an attack trying to close down all of the legal industry in California. They succeeded in closing about 600 dispensaries using a tactic called civil forfeiture, threatening to seize the properties that we operated in—until they came to Harborside. We fought them in landlord-tenant court, we fought them in state court, we fought them in federal court—and, to everybody’s surprise, we won.

What about the longstanding fight with the IRS?

We’ve also been tussling with the Internal Revenue Service, which has been trying to tax not just Harborside but every other dispensary in the country out of existence basically with this kind of insane tax code provision called 280E, which denies normal tax deductions to cannabis businesses. That fight goes on. We’ve won some battles; we’ve lost some battles. Right now, we are in front of the 9th U.S. Circuit Court of Appeals. We will continue pursuing this case just like every other case of injustice that we encounter until every single avenue is exhausted or we are victorious.

What do you see as your biggest contribution to the industry?

With Arcview, we provided $280 million to the cannabis industry. We were the first group to really start providing significant capital, and most of the companies whose names you recognize today got their seed capital at Arcview.

(This interview has been edited for length and clarity.)
– John Schroyer

Here is a list of judges and their positions and affiliations: