Kyle Kingsley, MD, is hoping he’s found a way to expand his cannabis cultivation company across multiple states, by setting up a series of linked LLCs and by emphasizing his traditional medical background in license applications.

After Kingsley founded Minnesota Medical Solutions LLC (aka MinnMed) two years ago, it won one of only two cultivator licenses in the state. This April MinnMed announced it had won $16.6 million capital backing, mostly from in-state investors. Now, the company is in the process of harvesting its first crop from an initial 15,000 square foot greenhouse, as well as building a scalable 3- to 7-acre greenhouse.

Early this year, Kingsley’s team also applied for a trademark for a new LLC, Vireo Health, which could act as an umbrella organization, connecting additional operations in other states.  Now Vireo’s first launch, Empire State Health Solutions LLC, founded in New York State this February, is applying for one of New York State’s hotly contested cultivation licenses. According to employment ads it placed in March for a head horticulturalist, it’s planning a 50,000 square foot facility.

As CEO of all three operations, Kingsley positions the companies as being different from more experienced MMJ players in several ways. Firstly, as the Vireo web site says, “Our approach is to insert standard medical, scientific, business and operational principles into the medical cannabis industry, something that is still relatively rare for medical cannabis producers.” Secondly, the group focuses on greenhouses, rather than indoor growing which is currently industry standard. Lastly, the company is investing heavily in technology and architecture that allows it to run nearly off-grid, with a far tinier carbon footprint than typical indoor grows.

Will this cross-state play be successful? New York applications for the five available grower licenses are due June 5, and competition is presumed to be heavy. 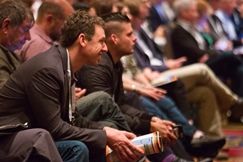