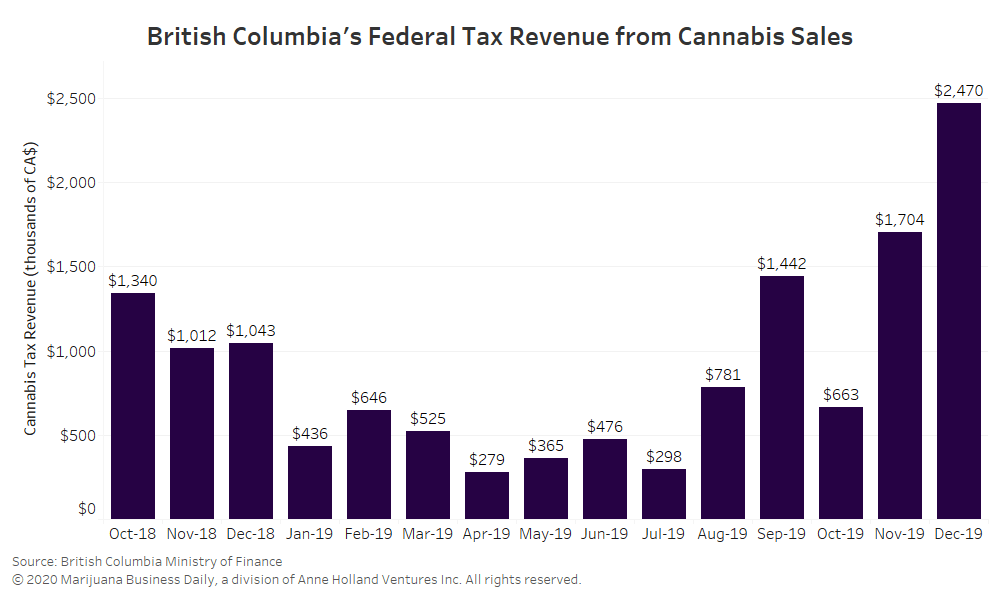 British Columbia’s monthly share of the federal excise duty on adult-use cannabis hit a fresh high as the province continued to execute its plan to greatly expand the number of privately and publicly owned marijuana stores.

For December, British Columbia’s share of the federal excise tax was 2.5 million Canadian dollars ($1.8 million) – the province’s highest monthly total since cannabis was legalized in late 2018.

The sum represents a 44% increase over the previous month’s CA$1.7 million.

ADVERTISEMENT
The province’s share of the federal duty was CA$10 million for all of 2019, according to updated data released in May.

New stores represent the biggest opportunity for one-time excise gains as retailers stock their shelves for the first time, forcing the provincial wholesaler to replenish its inventory.

The excise tax is payable by licensed cannabis producers when product is delivered to a purchaser – in this case, the Liquor Distribution Branch (LDB).

Roughly 80 cannabis stores opened their doors between October and December of 2019.

The province’s share is set to rise further in the coming months. More than 100 stores opened between January and May of this year.

Shipments of “Cannabis 2.0” products such as edibles and vape pens should also give a boost to excise duty payments.

B.C. is among a number of provinces with no formal deal in place with municipalities to share monthly proceeds from the federal excise tax.

Entrepreneurs say that has hurt business prospects, as municipal resistance has been a hurdle in some cases.

A tax-sharing regime would provide incentive for municipalities to be more welcoming to regulated cannabis businesses, according to some experts.

The Union of B.C. Municipalities (UBCM) has called on the province to formalize such an arrangement.