The Canadian government is being accused of insulating domestic cannabis producers against foreign competition by not allowing imports of medical marijuana.

And at least one foreign government plans to make a formal appeal to federal officials in Ottawa, Marijuana Business Daily has learned.

Canada has the most developed, and largest, medical cannabis market in the world – one that’s prized by international producers.

But industry sources say Health Canada, the government body tasked with regulating imports and exports of cannabis, has not allowed commercial medical cannabis into the country, often with little or no explanation.

That has set the stage for unfair competition, some executives and government sources say, while at the same time depriving Canadian patients of lower-cost medical cannabis alternatives.

Shane Morris of Ottawa-based Morris and Associates Consulting said federal law and regulations allow for medical cannabis imports, but in practice, he is not aware of any commercial imports having taken place.

“From a regulatory perspective, there’s nothing I can see that would prevent those imports on a commercial basis,” Morris, a former Aurora Cannabis executive, told MJBizDaily.

“Health Canada has to consider a whole range of elements on each particular import,” he said, including health and safety aspects, a security perspective and maintaining the same level of scrutiny faced by Canadian products.

He added: “I wouldn’t be surprised if protectionism was a possible element, considering that it’s a very young, new industry.”

A Health Canada bulletin released in summer 2019 outlines the “limited circumstances” under which the agency would consider the import or export of cannabis.

According to the bulletin, “the import and export of cannabis may only be authorized for medical and scientific purposes and within the parameters set by the international drug conventions.”

International shipments of high-THC cannabis for nonmedical purposes are prohibited.

The bulletin does not set out any conditions for the importation of medical cannabis for sale to Canadian patients, but it does state that only “small quantities” of cannabis will be allowed to be imported for scientific purposes.

Health Canada did not answer MJBizDaily‘s questions about commercial imports.

Canadian exports of cannabis oil products and dried marijuana for medical and scientific use have soared. (See chart below.)

In 2019, more than 5,000 liters (1,321 gallons) of cannabis oil products were exported for medical (commercial) and scientific use to 17 countries. Most of that went to Australia.

Roughly 3,740 kilograms (8,245 pounds) of dried cannabis for medical and scientific use was shipped overseas in 2019. A little more than 94% of that went to Germany.

One of the biggest issues facing medical cannabis exporters, including those from Canada, is a limited number of overseas markets.

The list of countries wanting to export commercial medical cannabis is growing by the month, but the number of nations importing meaningful quantities is limited to a handful that includes Australia, Brazil, Germany and, only recently, Israel.

That makes the Canadian market all the more appealing to regulated cannabis producers who have their sights set overseas.

But Canada imported virtually no cannabis for medical or scientific use between October 2018 and March 2019 – the latest period for which data is available.

Industry sources say it is unlikely any commercial imports have occurred since then.

Jamaica is one of the countries hoping to capitalize on exports of medical marijuana.

But industry and government sources there say the Canadian government is standing in the way.

“It appears manifestly clear that the refusal of the Canadian government to allow the importation of commercial quantities of marijuana from Jamaica is putting the investment of several Canadian investors in Jamaica at risk,” Audley Shaw, Jamaica’s minister of Industry, Commerce, Agriculture and Fisheries, said in a statement to MJBizDaily.

“In fact, several Canadian investors have already closed down their operations in Jamaica because of this.”

Shaw said Jamaica will make a formal appeal to the Canadian government “for this unfortunate position to be reviewed.”

Jacana, a leading company in the Caribbean medical cannabis industry, has tried but failed to ship its products to a Canadian licensed producer for sale to patients.

“We have worked with several Canadian LPs who have attempted to get an import permit from Health Canada, and in each instance, there has been no clear guidance as to why it is not possible,” Jacana CEO Alexandra Chong told Marijuana Business Daily.

Chong could not identify the companies because of nondisclosure agreements.

“In the continued absence of guidance from Health Canada,” she said, “one can only assume that there is an element of protectionism at play regarding medical cannabis importation.”

Chong said the import situation in Canada “will no doubt soon be challenged by other countries as the industry matures.”

Jacana endured a 13-month process that started in January 2019 and ended in February 2020.

When an import permit was eventually approved by Health Canada, the conditions for importing 10 kilograms of dried cannabis stated:

As Colombia and Australia become target markets for Canadian producers, licensed companies there have noted their inability to access the Canadian market.

Some executives requested anonymity to avoid jeopardizing ongoing talks with the Canadian regulator.

A multinational company with production assets in Colombia said Canada’s evident decision to block imports affects patients the most, “and it is Health Canada’s role to care about these patients.”

“This is something that’s very specific and targeted to the needs of Canadian patients in Canada. This is not a floodgates issue. This is about products that our partners are telling us patients need, and they’re not here.

“They’re pharma-grade and more affordable than what is available currently in Canada, and there’s no reason they cannot be let in.”

Fleta Solomon, CEO of Little Green Pharma, said the Australian producer has been waiting about two years for an import permit to do business with a Canadian company.

“A number of months ago after hearing nothing, our Canadian partner agreed that it was likely Health Canada has decided not to allow import for commercial use as there is too much product in the country,” she told Marijuana Business Daily. “We’ve stopped following up and have moved on to other jurisdictions.”

“Patients deserve the right to access quality pharmaceutical-grade medicines that have undergone rigorous testing just like all other prescribed medicines.”

“I would be in favor of initiatives that preserve this market for invested Canadian players,” he told MJBizDaily.

Federally licensed producers in Canada are stockpiling more cannabis than ever, but companies that want to ship to Canada say they can deliver certain medical products more consistently – and at a lower cost.

“If there’s one thing Canada is not lacking, it’s regulatory and cultivation expertise to deliver medicinal cannabis to our patients.

“I think it’s a no-brainer to say that’s not something we need to be importing, and it should be no surprise that we’re exporting it, because we’re the leading nation with tremendous expertise in the cultivation and production of medicinal cannabis.” 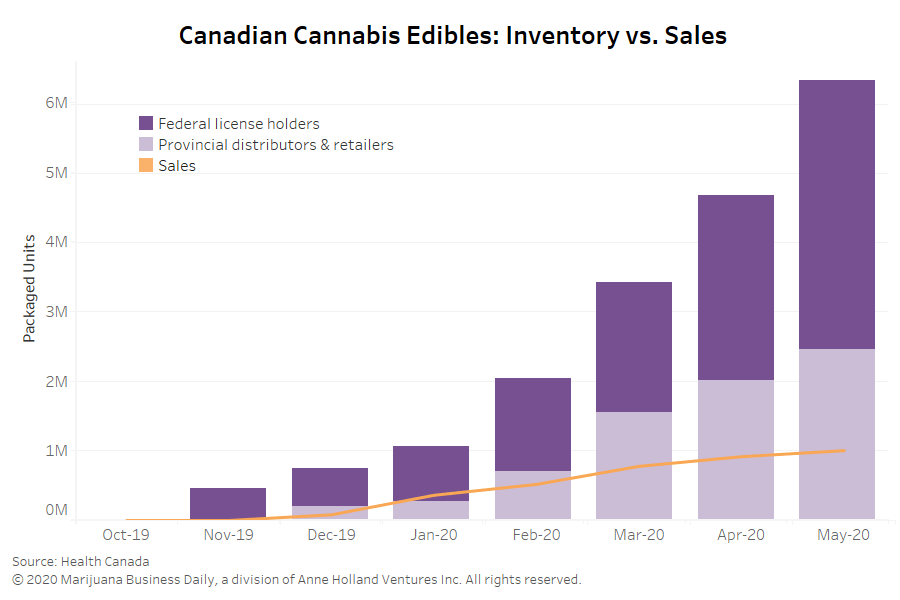