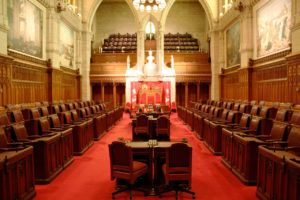 (This story has been updated to reflect Prime Minister Justin Trudeau’s statement Wednesday that sales of recreational cannabis will begin in October.)

The country becomes the first G-20 nation to legalize recreational cannabis, a move that one analyst called a “foundational step for the world.”

With the Senate’s approval of the latest House version, royal assent is expected to happen later this week, which sets the stage for recreational cannabis sales to begin across the country Oct. 17.

“It’s a continued progression toward the reality that prohibition is crumbling. This is a global thing,” he said.

‘Catalyst’ for the world

Industry players see fertile ground for other countries to follow Canada’s lead into adult use.

Canada’s move to end prohibition is especially “massive” for the activists, entrepreneurs, consumers and anyone on the ancillary side, according to Cronos CEO Mike Gorenstein.

“We think this will be a catalyst for the rest of the world.”

The industry breathed a sigh of relief last week when Canada’s federal government rejected several of the Senate’s proposed amendments, which sources said would have made it harder for legal recreational marijuana to overtake the black market.

Analysts see Canada’s federal and provincial legislation as part of an evolution.

“We still have a lot of work ahead of us with regard to edibles and other regulations, but this lays the foundation for what’s going to be a massive industry in Canada,” said Deepak Anand, vice president of government relations for Toronto-based consultancy Cannabis Compliance.

Canada has committed to regulating edibles and infused products within one year of the federal Cannabis Act coming into force.

“This solidifies the whole industry and cements our place in history as being the first G-20 nation to legalize cannabis for nonmedical purposes,” Anand said.

“It’s the end of prohibition.”

Canopy Growth and Cronos Group are traded on the Toronto Stock Exchange, under the symbols WEED and CRON, respectively.