One of Canada’s largest licensed medical marijuana producers doubts all the provinces will have networks of retail MJ stores ready for takeoff when the country legalizes recreational cannabis next summer – and so the company is readying its own mail-order platform.

Canopy Growth believes the majority of its sales in the first two years of the recreational market will be conducted through a mail-order system, the company said in a management document released Monday with its financial results.

ADVERTISEMENT
Consequently, Canopy said it took steps in the first half of this year to prepare an “Amazon-like” online marketplace to enable customers to purchase cannabis from multiple producers across numerous brands, the Financial Post reported.

The company doubts Canada’s full network of regulated cannabis retail stores – required to satisfy consumer demand – will be ready for at least two years after legalization.

Canada’s premiers teamed up to express concern over the tight time frame. But the feds have said they’ll allow licensed producers to meet recreational demand via the mail-order system until the provinces are ready to roll out their regulatory frameworks. 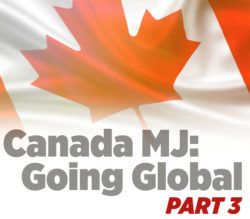