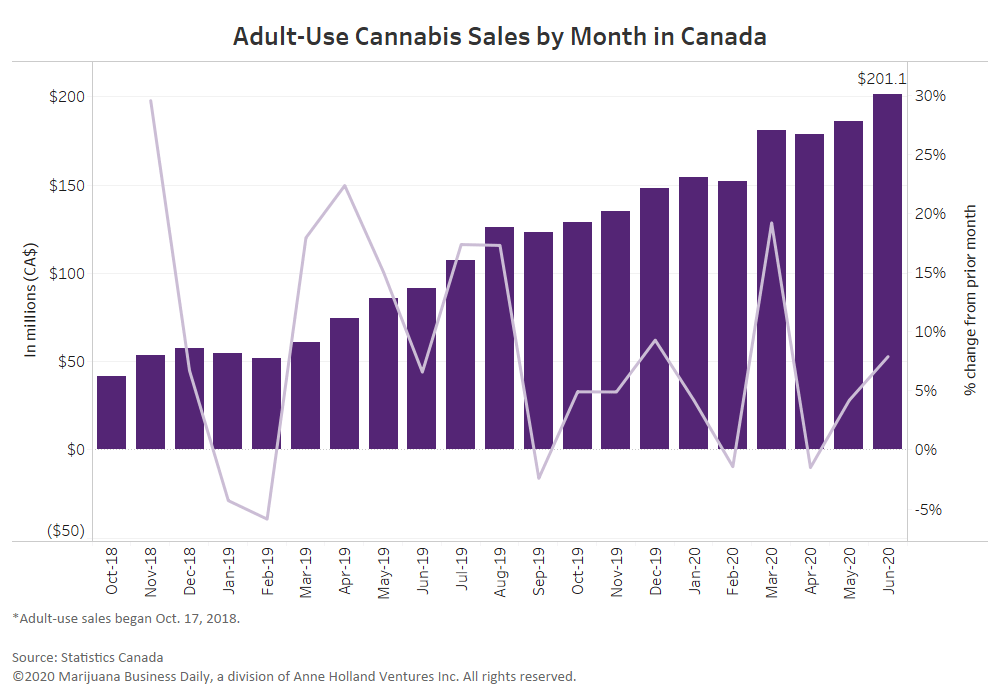 Canadian retail sales of adult-use cannabis crested yet again in June, increasing 7.9% over the record set in May.

The national monthly increase reflects natural market growth and improved capture of consumers away from the black market, said Theo Zunich, president and CEO of YSS Corp., which operates 16 licensed retailers in Alberta and one in Saskatchewan.

“I think if you look at stats over the last year or so, they show that the more retail outlets you have, the better adoption of the legal market you’re seeing by the population,” Zunich said.

Ontario, Canada’s most populous province, has reclaimed the lead in monthly cannabis sales from smaller Alberta, whose robust network of licensed marijuana stores helped the province’s sales surpass Ontario’s in April, when Ontario’s bricks-and-mortar retailers were temporarily closed because of COVID-19.

Ontario sales approached CA$48.9 million for June, an 18.8% increase over May.

Meanwhile, Alberta sales increased by just 0.8% on a monthly basis to CA$46.7 million.

Zunich said he was surprised Alberta’s monthly sales didn’t increase more in June, based on his stores’ performances that month.

Despite Alberta’s abundance of stores, he believes the province’s adult-use market still has plenty of room to grow.

“A big reason why we love the industry is, in our view it’s the highest-growth (consumer packaged goods) sector in Canada for the next two to five years,” Zunich said.

“The amount of growth that you’re going to see is based on what province you’re currently operating in, and where your growth objectives are,” he added.

“Ontario’s got a lot more growth than Alberta does, but by no means do we think Alberta’s saturated.”

Quebec, the second-largest province, came in third place with sales just under CA$40 million, a 3.8% monthly increase, while British Columbia came in fourth with 7% monthly growth and sales of CA$29.4 million.

Sales in Manitoba grew 18% from May to nearly CA$8.2 million.

But Manitoba’s market continued to be overshadowed by its smaller neighbor, Saskatchewan, where sales grew by 4% on a monthly basis to reach CA$11.1 million.

In the smaller provinces on Canada’s Atlantic coast, June retail sales and monthly sales growth were as follows:

Statistics Canada is scheduled to release retail trade figures for July on Sept. 18.

Solomon Israel can be reached at [email protected]