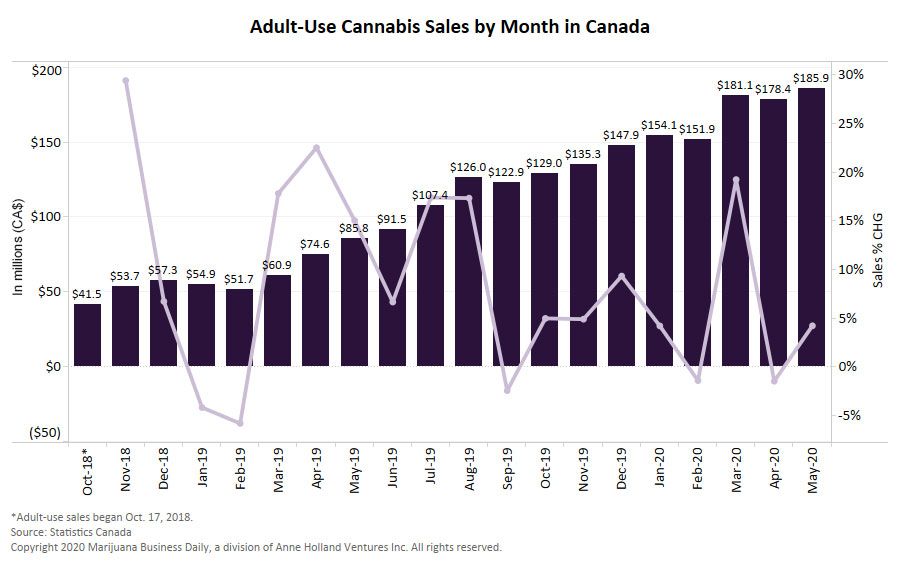 Retail sales of regulated cannabis ascended to a new high in Canada in May, growing nearly 4.2% from April.

But a quarter of all sales occurred in only one province, Alberta – the result of retail-store imbalances across the country.

That edges out the previous monthly record high, which was set in March as Canadian consumers stocked up on marijuana in the face of the COVID-19 pandemic.

“We consider this performance resilient and robust as store closures lingered during May serving as a headwind to sales,” wrote the analysts, who estimate the Canadian market will exceed CA$2.4 billion in sales this year.

May cannabis sales were highest in Canada’s fourth-largest province, Alberta, which has nearly 500 licensed cannabis stores, far more than any other province.

Ontarians spent CA$41.1 million on cannabis in May, a 2.2% increase over April.

Monthly sales declined by 6.1% in Quebec, the second-largest market, to CA$38.5 million.

Stifel’s Carter and Growe attributed Quebec’s sales decrease to “some pantry de-loading as sales remained robust through the first two months of store closures, as well as the significant pricing compression on dried flower.”

Quebec’s total ban on cannabis vapes and regulatory restrictions on marijuana edibles “will likely limit this market’s potential,” they wrote.

Monthly marijuana sales also increased in every other province except New Brunswick, which experienced a monthly decline of 6.5% to CA$5.1 million.

Tiny Prince Edward Island experienced the greatest monthly growth, with sales bouncing back by 32.2% to CA$575,000 as provincial cannabis stores reopened in May.