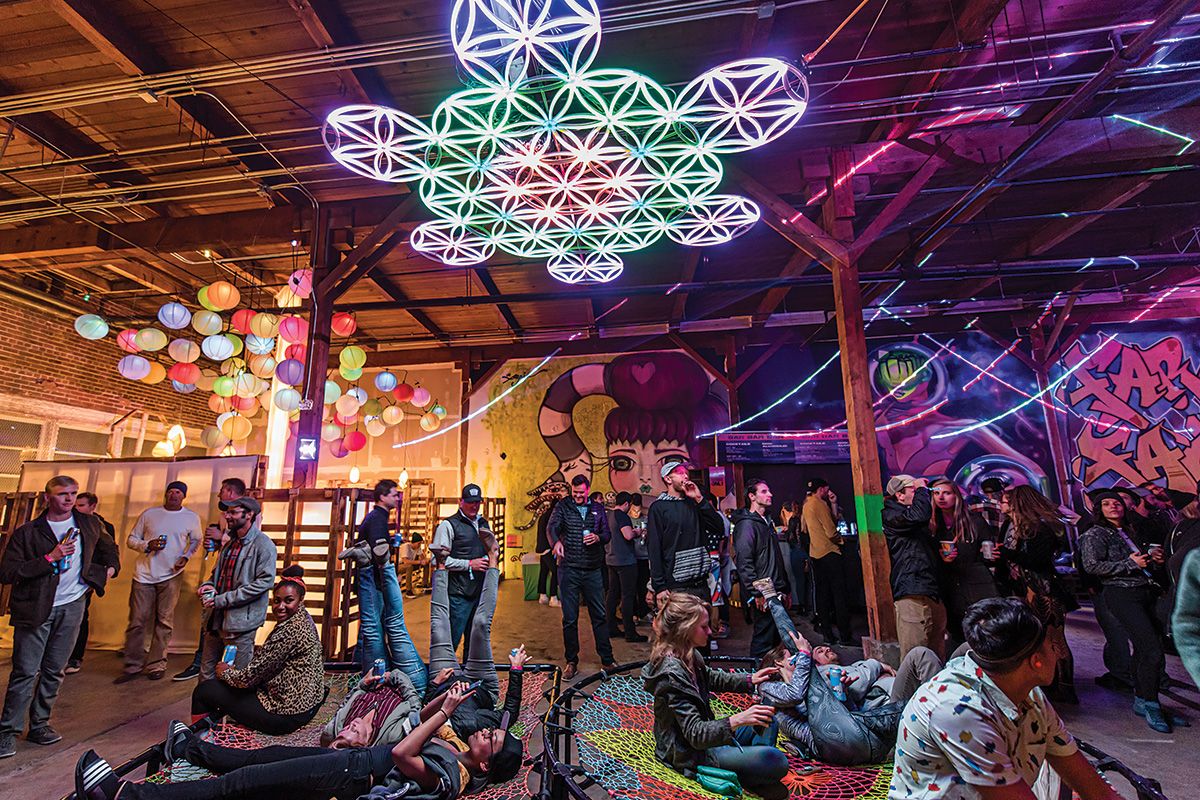 Cannabis companies use tours, silent discos and coffee carts to replace traditional advertising and get in front of customers

“Cannabis companies need to stand out and make that tactical, memorable experience to make consumers more comfortable with their brands,” said Amanda Omahen, an account manager for Grandesign Experiential, a San Diego-based experiential marketing company that has worked on campaigns for brands ranging from “American Idol” TV franchise to Fruit of the Loom.

In an industry constrained by regulations that limit advertising cannabis products, many companies have focused their marketing efforts on building experiences that create a positive impression on potential customers.

Because the industry is so new, it has a chance to model itself after what other legacy industries are doing, but it also has the opportunity to think differently, to learn from the past and get creative with the constraints that are imposed on them.

Legacy industries such as craft beer and herbal tea are what led Seed & Smith CEO Brooks Lustig to open his off-the-beaten path vertical cannabis business to tours. A native of Boulder, Colorado, Lustig had grown up taking visiting family and friends on tours of the Celestial Seasonings tea factory. Later, craft breweries adopted the tour model for marketing purposes.

When Seed & Smith was founded in 2014, Lustig worried about how people would find the dispensary, which is located in an industrial area with little foot traffic. He teamed up with marijuana tour companies, which began bringing their customers to see how Seed & Smith operates. While he knew it was risky to share the company’s cultivation and other processes—consultants and competitors have taken advantage of the opportunity to take photos—Lustig said providing the experience has been well worth it because of the knowledge people gain about cannabis.

“We’re really pushing (the idea) that cannabis isn’t this scary thing,” he said.

Demystifying cannabis is one of the outcomes around which women-centric cannabis brand Garden Society has built its marketing program. The Cloverdale, California, company, which recently launched a delivery service, is working with its loyal women customers to host garden parties—casual gatherings of their friends who come to learn about cannabis, get questions answered and purchase products that will be delivered to them.

“A lot of women are afraid of edibles, so we do a lot of education around dosing,” Warner said. “We’re really cognizant of talking about not smoking an entire joint at once, and it’s the same with edibles: Cut them into quarters. It’s not the scary drug our culture has deemed it to be.

“The fastest-growing segment of cannabis users are baby boomers and women in California,” Warner continued. “Most are not first-time users, and as they get reintroduced to cannabis, it’s imperative they have a positive experience.”

In addition to being educational, parties that combine art and music and create memories associated with a brand are a good way to build customer loyalty. Stratos, a Pueblo West, Colorado-based maker of THC- and CBD-infused tinctures, salves and tablets, recently hosted a partners’ massage class designed to promote its CBD-infused salves. Stratos hoped that attending the class would create a memory for participants as well as educate them about the benefits of using CBD salves during massage.

During the free class, led by licensed massage therapist Katie Uveges, an instructor at the Colorado School of Healing Arts, couples learned how to use CBD topicals in home massage as well as techniques to improve their partner massage skills. Stratos also provided each couple with a jar of one of its salves, a $40 value.

“The CBD market is very crowded, so we knew we had to get creative to stand out,” said Brenda Verghese, Stratos’ vice president of research and development.

“We hoped to have a packed room and get people excited about massage and incorporating CBD in an experiential way. The room was full, and people seemed to be having fun and enjoying themselves.”

It’s not the first time Stratos has taken its product to a target market. The company also started Runner’s High Run Club, a weekly running club for cannabis enthusiasts, during which runners met up with Stratos team members for the run and then went to a local restaurant for food and drinks afterward. Members received special discounts at Native Roots, the company’s local dispensary partner. Stratos also has offered educational seminars for residents at a senior living facility—a well-attended event that promoted not only the company’s salves but also its tablets.

“They’re smoke-free, sugar-free and easy to add to a wellness regimen, Verghese said. “Seniors are already
used to taking pills, so it fits in with their regimen.”

Slang Worldwide, a consumer packaged goods company that owns, licenses and markets cannabis brands, recently staged a two-night party—Far Out Factory—in a large warehouse in north Denver. While cannabis consumption was forbidden, representatives from a number of Slang’s cannabis brands were at the party, which featured music, local artists and interactive installations such as a large mural that people could add to with Slang-provided markers.

“It takes the intersection of music and art and brings them together,” said Brittany Hallett, vice president of brands, media and events at Slang Worldwide. “We really feel like cannabis has a symbiotic relationship with music and art. It fosters moments for enjoyment and connection.”

Slang brought its space- and exploration-themed brand District Edibles to life through a silent disco that made participants feel as if they were in space because the outside world was blocked out by music playing through their headphones. For its wellness supplement brand Pressies, which combines THC with nutraceuticals, Slang created a large-scale Lite-Brite-style board that encouraged partygoers to press colored pegs into a board to create shapes or convey thoughts.

“In marketing, we talk about impressions—how many impressions are we able to make through our efforts?” Hallett said. “Far Out Factory is creating a sticky impression. It’s not just handing out a coupon that ends up in a trash can a few days later.”

Sometimes, marketing firms use CBD products to promote something other than the benefits of CBD. Grandesign Experiential, for example, created a campaign that offered CBD-infused coffee as part of a cross-promotion with the Season 3 premiere of HBO’s “High Maintenance.”

CBD-infused beverages were served in branded cups with branded napkins and hot sleeves. After all 2,000 cups were distributed, Grandesign estimated 12,000 impressions were made over two days when people saw someone carrying a branded cup.

That campaign worked both ways: promoting the CBD-infused coffee business as well as the HBO show, Grandesign’s Omahen said.

“This was a great campaign to open that conversation up and reach consumers,” Omahen said. “It comes down to education and getting people to engage with the brand and learn more about CBD. People loved the coffee, and it was a brand experience people loved.”

Creating an experience is also a great way to engage potential customers at trade shows without appearing to do a hard sell to people visiting your booth.

“You can treat it like a sales environment, but we all know how that feels,”  said Zack Schwartz, founder of Chicago-based marketing firm Abstract Actual. “We’re beyond the one-way sales strategy of being constantly bombarded by sales and advertising, and we’re more interested in having a connection and finding a mutually beneficial relationship. That’s why I’m focused on and really committed to face-to-face in general but also face-to-face marketing.”