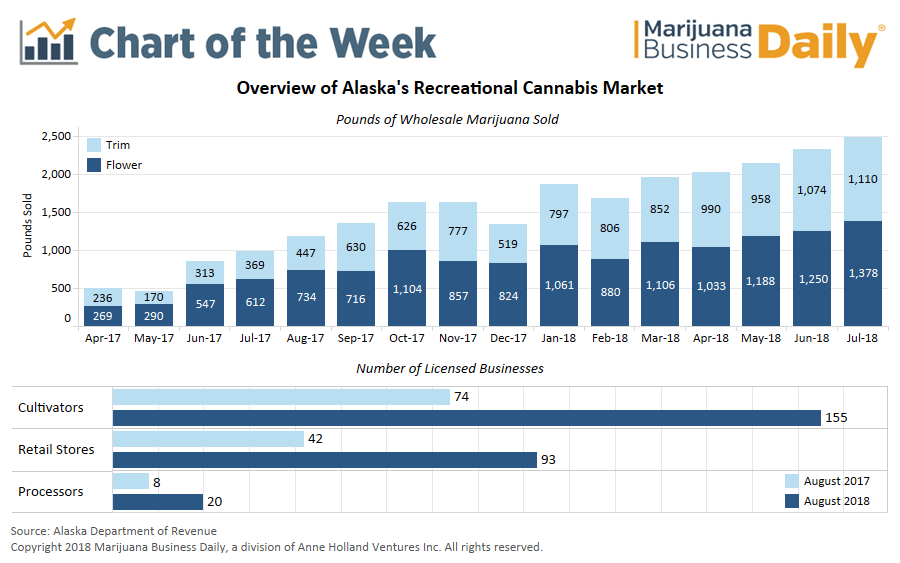 Alaska’s summer tourism season has produced the strongest months on record for wholesale marijuana sales, but MJ businesses are still adapting to the cyclical nature of the state’s adult-use market.

The state’s cultivators sold nearly 2,500 pounds of flower and trim to retailers and infused product manufacturers in July – an increase of 7% from the previous month and up 154% from July 2017.

ADVERTISEMENT
Wholesale cannabis sales have risen every month since March as retailers stocked up on product ahead of the busy tourist season, which typically runs from Memorial Day through Labor Day.

Cary Carrigan, executive director of the Alaska Marijuana Industry Association, said the market surges in the summer, with the majority of the state’s adult-use retail sales taking place over this three-month period.

“The cyclical nature of the retail industry here creates a boom-and-bust system for Alaska,” he said. “It’s super good – really hot in the summertime – but it slows down quite a bit in the wintertime when the tourists aren’t here.”

The number of cannabis businesses in Alaska also has increased sharply compared to a year ago, with the number of licensed cultivators and retailers in the state rising 109% and 121%, respectively.

But Carrigan doesn’t believe Alaska has reached a saturation point in terms of the number of licensed businesses because not all companies have been able to successfully navigate the state’s unique industry.

“It’s taken cultivators and retailers some time to get to the point where they’re operating in a place where they understand they have to slow it down and pull it back a little bit in the fall and winter, then ramp it back up in the spring,” he said.

Some additional highlights from Alaska’s recreational marijuana industry include: