This is the first in a series of charts featuring data on California’s medical cannabis market. Marijuana Business Daily will publish additional charts in this series every other Monday for the next two months. 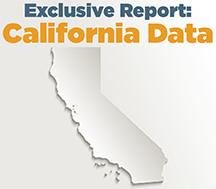 The figures offer a snapshot of the size and scope of California’s massive medical cannabis market, though actual sales are likely much higher because of the unregulated nature of the industry in the state. The numbers also provide a hint of what’s possible if California legalizes recreational marijuana this fall.

Marijuana Business Daily obtained the numbers via a partnership with HDL companies, which contracts directly with nearly every county throughout the state to analyze sales tax receipts from businesses.

California doesn’t currently have statewide regulations on its massive medical marijuana industry, so it hasn’t officially tracked sales, tax collections from the industry or the number of dispensaries in the state. It’s therefore been difficult to get a handle on the size of the market, and the marijuana industry at large has had to make estimates about the state’s market with little to go on.

According to HDL’s data, California dispensaries reported $845 million in sales from April 2015 through March 2016, based on reported sales tax receipts. That dwarfs the second-largest medical cannabis industry, Colorado, which hauled in $408 million in MMJ sales at the dispensary level last year.

California also had 10% more dispensaries than all other MMJ states combined as of March. (Note: Washington State recently shut down its unregulated medical cannabis market as it transitions to its rec program, wiping out the hundreds of existing medical cannabis dispensaries).

To put this in perspective, Colorado currently has 528 licensed dispensaries, while most other states have anywhere from a handful to several hundred.

Although California officials don’t specifically track MMJ tax revenues or the number of operating dispensaries, HDL has access to approximately 98% of all sales tax receipts from every type of business in California through the State Board of Equalization database.

HDL’s Marijuana Management Team has developed proprietary algorithms that analyze each of these receipts, looking for any sign that would indicate a potential MMJ dispensary.

Any “hits” registered by the algorithm are then validated through further research by an HDL associate. A simple calculation converts this sales tax data into gross receipts to identify the total revenue generated for each dispensary location.

The state’s Board of Equalization has released limited MMJ sales figures based on tax receipts in the past, but HDL spent time further scrubbing the data to provide a more accurate picture of the market. It then provided that info to Marijuana Business Daily via a partnership between the companies.

While $845 million in sales is a staggering figure, the true market is likely bigger than it appears.

In the absence of statewide rules, regulation of California MMJ businesses has historically been left to local towns and counties –creating a volatile regulatory climate that’s left many MMJ businesses operating in legal gray areas. Due to this legal uncertainty, many dispensaries operating in counties hostile towards MMJ businesses likely are under-reporting their sales to avoid detection by county officials, as high sales may raise red flags, according to David McPherson, principal at HDL Companies.

McPherson said he doesn’t have enough information to provide a reliable estimate of how much under-reporting is occurring.

A closer look at the tax data bolsters this notion.

In Orange County, for example, average per-dispensary sales equate to just over $65,000 – far less than it would take to rent a facility, pay employees, purchase inventory, etc. In San Bernardino County average sales are even lower: just over $22,000 across the counties’ 179 dispensaries.

California’s state sales tax rate varies by municipality, but with $845 million in sales the state is currently collecting over $76 million annually at a rate of 9%. And this data shows – unequivocally – that California’s current regulatory scheme is leaving more on the table.

Rather than regulating dispensaries out of existence, local rules and regulations have caused dispensaries to simply subvert taxation – continuing to operate under the nose of local law enforcement.

California passed a comprehensive MMJ regulatory framework in 2015 – which will bring much-needed clarity, transparency and stability to the state’s MMJ market – but the new regulations will not be fully implemented until 2018.

But despite the inadequacies of California’s current regulatory system, the market is clearly promising for both existing and potential new businesses looking to enter the industry.