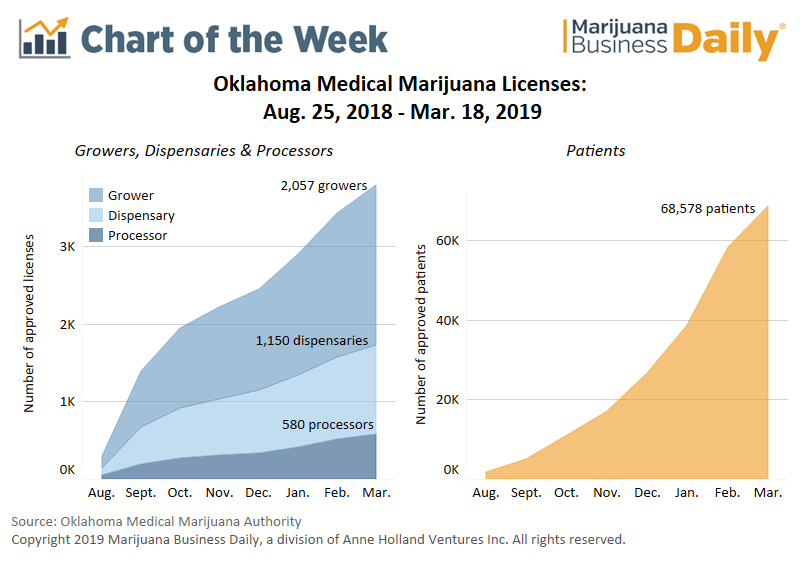 Nine months after Oklahoma voters approved one of the most business-friendly medical marijuana initiatives in the country, the number of licenses and patient approvals continue to rise at a feverish pace.

Low barriers to entry for both are driving the growth, namely:

Efforts to constrain the program, such as by banning smokable marijuana or requiring a licensed pharmacist in each dispensary, were foiled by legal challenges and the state’s attorney general.

According to the Oklahoma Medical Marijuana Authority, the state has approved licenses for:

Oklahoma is believed to be the only market in the United States where more grower licenses have been issued than dispensaries and processors combined.

Bud Scott, executive director of the Oklahoma Cannabis Industry Association, estimates that less than one-third of the licensed entities are in or “anywhere near” operation.

Oklahoma cannabis attorney Sarah Lee Parrish estimated a higher number, as much as 50%.

Regardless of the exact number, Scott said, “there is still a tremendous amount of activity and investment rolling in despite the overwhelming number of commercial licenses.”

Sales hit $7.2 million in February, the industry’s third full month, up from $4.3 million in January and $1 million in December.

Here are some other facts you need to know: