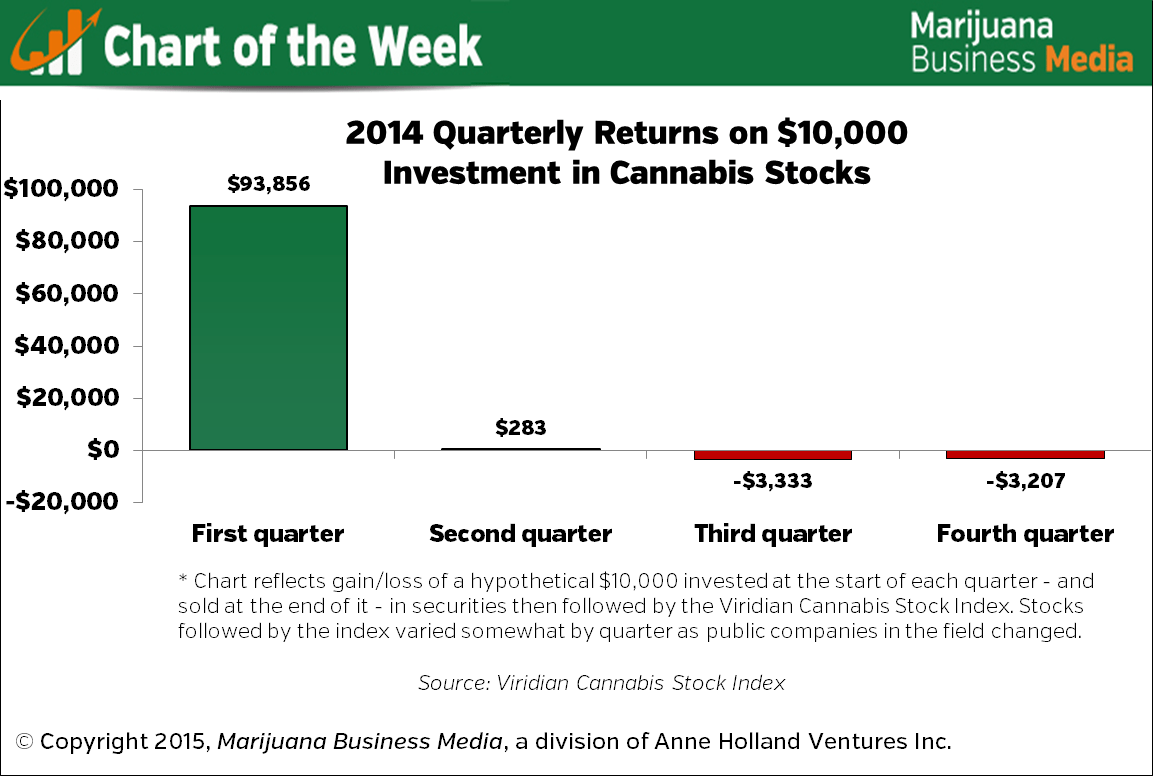 Cannabis stocks proved lucrative at the beginning of 2014, but the chances of a solid return deteriorated in the second half of the year.

An investor who pumped money into a mix of securities followed by the Viridian Cannabis Stock Index in early January of last year could’ve netted a 938% return at the end of the first quarter. That equates to a profit of nearly $94,000 on an initial investment of $10,000.

But a similar investment made in the second quarter would’ve only netted an investor $283 in profits.

From there, the chances of a loss increased dramatically, with the Viridian index falling more than 30% in the third quarter and again in the fourth.

The Viridian index included 75 cannabis-related firms as of the end of 2014.

It’s one of several indices that attempt to track the overall performance of U.S. cannabis stocks. The returns are purely hypothetical, as investors can’t actually buy shares in the indices themselves at this time. Other cannabis stock indices varied slightly but showed a similar overall trend.

Marijuana stocks as a whole surged in the first quarter last year amid positive news from the federal government on banking and the successful start of recreational sales in Colorado.

One possible factor behind the downturn in cannabis stock prices: Many more public companies joined the cannabis bandwagon as the year went on, either via IPOs, reverse mergers or by developing cannabis-related product lines.

This added a substantial amount of volatility to cannabis stocks as a whole. Additionally, marijuana stocks in general are extremely volatile to begin with, given the uncertainties surrounding the legality of the industry and the prevalence of publicly traded companies operating on questionable fundamentals.

These types of fluctuations will likely continue in 2015 and beyond as the industry grows and matures.