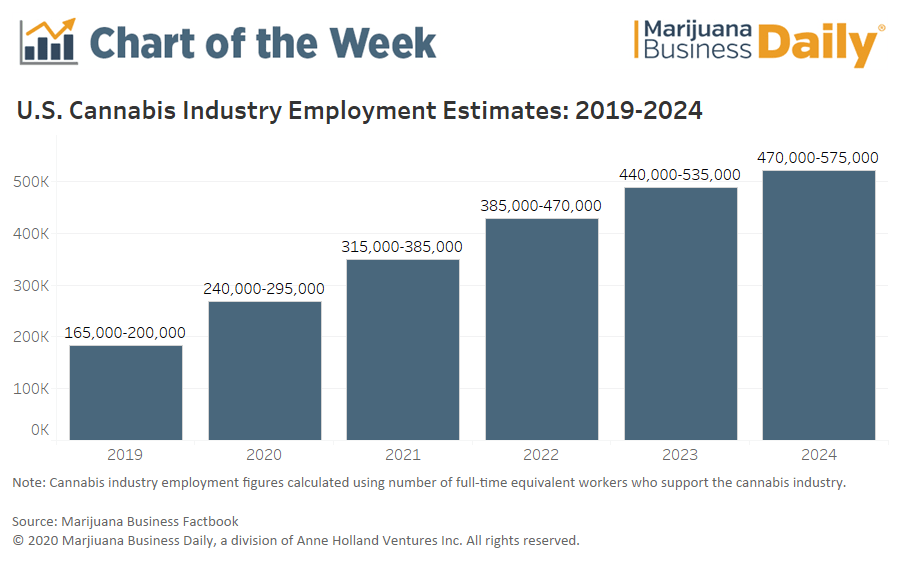 The number of people working in the U.S. cannabis industry is expected to jump to 240,000-295,000 by the end of 2020, slightly higher than the number of computer programmers employed in the United States.

The anticipated rise in cannabis employment represents a nearly 50% increase over 2019 levels, which was estimated at 165,000-210,000 in the newly released Marijuana Business Factbook.

ADVERTISEMENT
Cannabis employees include people directly working in the sector, such as budtenders and extraction technicians, as well as employees of ancillary companies – think consultants and lawyers – who support the marijuana industry.

The Marijuana Business Factbook estimates that between 2020 and 2024, the industry will add nearly 250,000 full-time equivalent jobs.

However, there is the potential for cannabis sales to slow if the economic pain caused by the COVID-19 pandemic becomes more pronounced. If so, growth in marijuana industry jobs might stall.

So far, sales have held relatively steady through the coronavirus crisis. But that could change.

Among other things, it’s possible the added $600-per-week in federal unemployment benefits might end this month – or be reduced by Congress.

Whatever the case, the retail sector accounts for most of the jobs in the cannabis industry.

That’s because of requirements in nearly all state-legal markets to sell marijuana in distinct physical locations rather than alongside other goods in traditional retail outlets such as groceries or drugstores.

If marijuana could be sold in traditional stores, the number of retail jobs supported by the cannabis industry would likely be a fraction of what it is now.

For example, if a drugstore generated an additional $300,000 per year in cannabis sales, it might need to hire only a couple of additional employees to handle the increased sales volume.

How to steer your marijuana business through an economic downturn