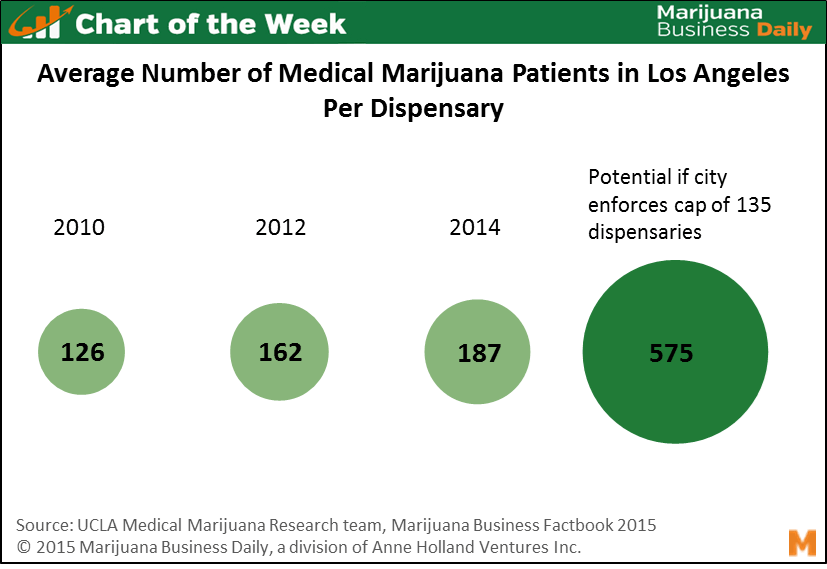 Legal medical marijuana dispensaries in Los Angeles stand to gain hundreds of new patients each and boost their revenues dramatically if local officials are successful enforcing a cap on the number of MMJ businesses in the city.

The Los Angeles city attorney has been cracking down on illegal dispensaries since the passage of Proposition D in 2013, which limited the number of lawful establishments to 135.

Hundreds of dispensaries have closed over the past two years as a result. But around 300 – and possibly more – illegal dispensaries continue to exist, given that many of those that were forced to close simply opened up undetected in other areas of the city.

Dispensaries deemed legal under Prop D therefore haven’t seen a huge spike in traffic or revenue – at least not yet.

Should the city successfully enforce the law and close all illegal operations, the number of local patients per dispensary would rise to an average of about 575, an increase of over 200% from 2014. That would help lift revenues – and likely profit margins – for dispensaries allowed to operate under Prop D.

The exact number of dispensaries in the city is difficult to determine, and estimates range from a couple hundred to nearly 1,000.

For this chart, Marijuana Business Daily used estimates from a medical marijuana research team at UCLA, which pegged the number of dispensaries in 2014 at 418 – most of them operating in violation of Prop D. Based on the estimated patient count in Los Angeles – around 2% of the population, according to the 2015 Marijuana Business Factbook –  there were about 190 patients for each of those 418 dispensaries last year.

Aside from the benefit to legal dispensaries if the crackdown on illegal businesses is successful, these figures underscore how heavily regulations influence the business climate. In markets that limit the number of dispensaries – which is the case in most MMJ states – businesses can get a much bigger share of the patient pool, and mom-and-pop shops have trouble competing.

In states without caps, such as Colorado, a highly competitive market of smaller enterprises emerges where profit margins are continually squeezed and only so much market share can be captured by individual businesses.