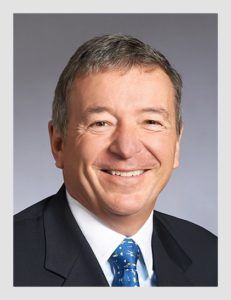 The former chief executive of one of North America’s top beer makers says it’s only a matter of time before all alcohol companies are involved in the cannabis industry.

His former employer, Molson Coors, is even reportedly having discussions with cannabis companies.

Dan O’Neill, who served as Molson CEO from 2000 to 2009, recently joined the board of CannaRoyalty, a Canadian company focused on building marijuana brands north and south of the border.

O’Neill was credited for turning around Molson and bringing the lethargic domestic beer company onto the world stage through a merger with Colorado-based Coors.

So what will separate the winners in the cannabis industry? Quality and consistency, O’Neill says.

“There has to be someone who comes out of this with a national brand that can provide consistent quality and consistent results to individuals,” he said.

What must a cannabis company do to stand out?

You have to know, in this category and all categories, that the safety has to be there, too.

I worked at H.J. Heinz Co. When you buy a can of mushroom soup, that person has an expectation of what that’s going to taste like, that it’s perfect quality and the impact on them – how they feel. You have to be able to deliver on those attribute ratings.

Consumers want to know what they’re going to feel like before they start. The ability to deliver the attribute that the individual is looking for, and to be able to do it consistently, with a quality that people recognize, is going to set people apart right from Day One.

It’s been a while since Constellation made a splash in the industry. When are we going to see more cross-industry investments?

All alcohol companies are going to have to get involved in this industry at some point. That will come. Most of the top people at these big liquor companies are older and are (more risk averse). Federally, it’s not even legal.

Where do they put their profits? That’s the inhibitor right now. I don’t think (liquor CEOs) have reached that comfort zone yet.

Is cannabis a threat to alcohol?

For sure – once it’s legalized. The growth potential for cannabis companies is the same as that of alcohol after prohibition ended.

Everywhere you look in CannaRoyalty, you find people that are very knowledgeable in an area that is critically important to the ability to participate in the industry’s growth.

Everyone believes this industry is going to grow like crazy, but the restraint is going to be the ability to get cash. And to have the knowledge about how to spend that cash – to not throw it down the sewer (is important).

One thing that sets it apart from others is (CEO Mark Lustig’s) background, his knowledge of financing, the amount of cash they have in reserve and his ability to raise capital.

Where do you see overlap with growing alcohol and cannabis companies?

When you’re talking about brand development, product quality, marketability, there’s a huge ability to segment the market by age and benefit. There will be cannabis brands associated with events in your life (like there is with beer).

There will be a price segmentation over time, too.

Others include the age profile of the heavy user; attrition of users through their mid-30s and 40s – then their return later; and distributions networks.

What mistakes do you see the big players in Canada making right now?

I think a lot of people are spreading themselves so broadly that they’re not going to have an identity.

Being product-driven is critical. Think of any product you use regularly. It delivers what you want, or you wouldn’t use it.

CannaRoyalty trades on the Canadian Securities Exchange under the ticker symbol CRZ and on over-the-counter markets as CNNRF.