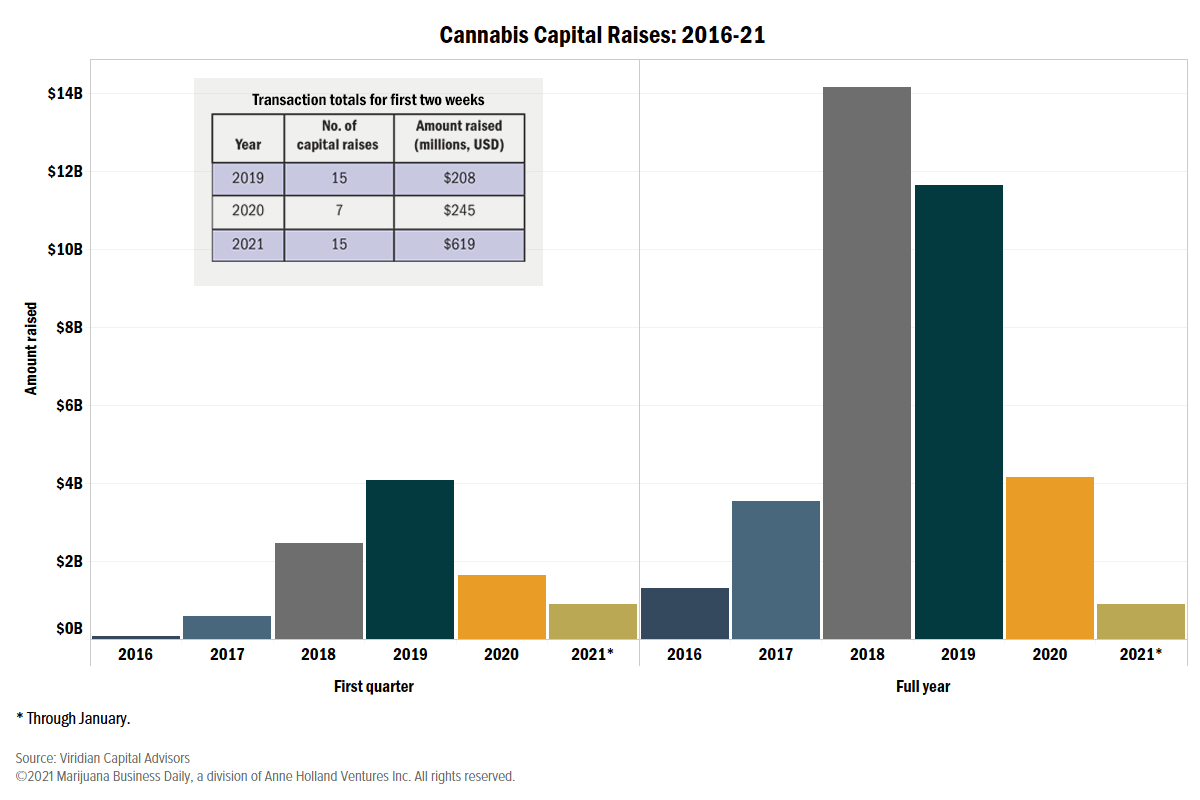 A Democratic election trifecta – control of the White House and both chambers of Congress – is giving marijuana industry executives hope for federal reform and encouraging investors to pump a record amount of money into cannabis businesses during the initial weeks of the year.

North American cannabis companies either closed or announced more than $1.6 billion in capital raises in January in the wake of Democrats taking control of the U.S. Senate, further easing a funding shortage that began in 2019, according to an analysis by Denver-based MJResearchCo.

“The capital drought that began in late summer 2019 appears to be over, with cannabis operators closing in on $2 billion in new capital – including announced deals – since the Democratic win” in Georgia’s U.S. Senate runoff race in January, said Michael Regan, founder and analyst at MJResearchCo.

“The market is investing on improved probabilities for favorable cannabis legislation with Democrats in control of the House, Senate and presidency.”

A record year in store?

In fact, experts said, the industry might well haul in a record amount of funding this year.

A pickup in funding activity would be in marked contrast to last year, when funding plunged to $4.2 billion from $11.6 billion in 2019 and $14.2 billion in 2018, according to New York-based Viridian Capital Advisors.

Marijuana investors stopped writing checks in 2019 because many companies were spending vast amounts of money to gain market share but failed to show a profit. That caused their stock prices to crater.

But investors did an about face after Democrats won both seats in Georgia’s Senate runoff races on Jan. 5.

In the first two weeks of January alone, North American marijuana companies raised an unprecedented $619 million, according to closed deals tracked by Viridian. (See table above).

The money raised so early in the new year was 100 times the amount pocketed by cannabis companies in the first two weeks of 2016 and almost double the previous record for that time period, set in January 2018, according to Viridian.

“We are off to a big start, and quite a few stars are aligned that could well make this a record year,” said Frank Colombo, Viridian’s director of data analytics.

For all of January, Viridian counted 21 corporate raises, with companies closing $899.7 million worth of debt and equity deals.

Morgan Paxhia, managing director of Poseidon Investment Management, a San Francisco-based cannabis investment firm, is among those who believe the amount of capital raised in 2021 could exceed the previous high of $14.2 billion in 2018.

Sources of the capital, Paxhia predicted, will include:

The Democratic sweep of the White House and both chambers of Congress already are paying dividends for the cannabis industry, according to Emily Paxhia, also a managing director at Poseidon.

“In many ways, the perception is more important than the reality,” said Paxhia, who is Morgan’s sister.

For example, she noted, industry banking laws are much more likely to be liberalized for cannabis companies under a Democratic-controlled government.

“Any improvements in banking will be better than what we have today,” she said, adding that President Joe Biden has already said he is in favor of decriminalizing marijuana, which could be the first step to legalization.

And if recreational marijuana is legalized at the federal level, it would open the door to plant-touching companies to be traded on the New York Stock Exchange and the Nasdaq, Emily Paxhia noted.

With Democrats in charge, Viridian’s Colombo said he believes there will be “280E reform” to allow marijuana companies to depreciate equipment and property  and take other tax write-offs that mainstream businesses now do.

In addition, big institutional investors will increasingly be willing to provide capital to cannabis companies, according to Colombo.

In the past, cannabis companies often depended on high-net-worth individuals and family offices for financing, he noted.

But in the coming years, she added, if marijuana is legalized at the federal level, rates tied to debt financing could fall more in line with traditional businesses, making it worthwhile for many companies to refinance their double-digit debt.

However, even with Democrats in control at the federal level, Morgan Paxhia cautioned that industry captains shouldn’t “let their guard down and greed up.”

For example, the growing cannabis industry could face more regulatory pressures from federal agencies such as the U.S. Securities and Exchange Commission.

“The SEC is like a glacier – it moves slow at first but will crush everything in its path,” he said, echoing a quote he had heard.

Similarly, Colombo warned of “potential potholes along the way,” noting that any federal legalization might take longer than many expect.