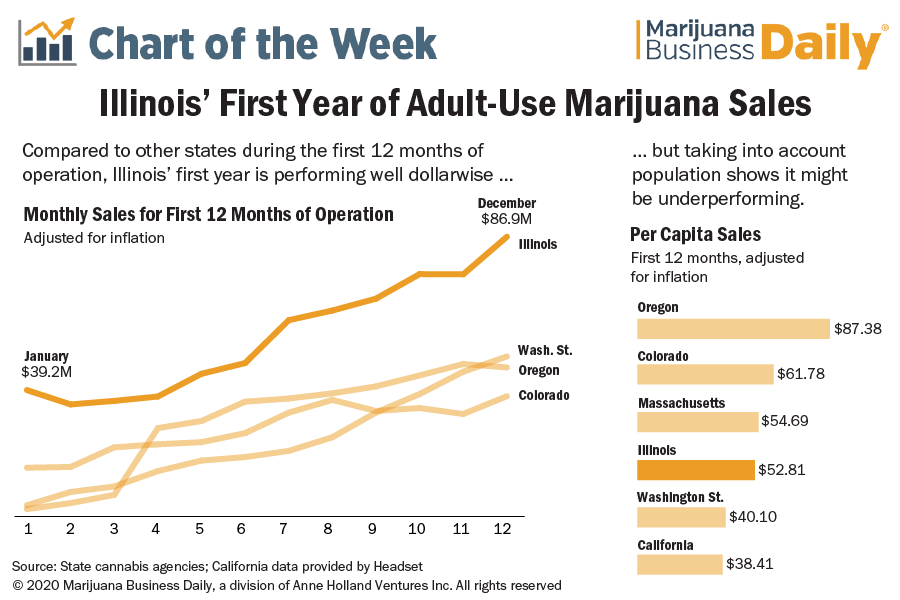 While Illinois topped $1 billion in total cannabis sales in 2020 as consumers scooped up adult-use products, the new recreational marijuana market there might actually be underperforming when considering the state’s large population.

While nowhere near California’s first-year numbers, that amount is almost double what Colorado, Oregon or Washington state brought in during their first 12 months of recreational sales after adjusting for inflation.

But per capita numbers suggest a different story.

With a population of 12.7 million people, Illinois has a few million more residents than Colorado and Oregon combined.

Yet, first-year adult-use sales per resident in those states were $10 or more higher than in Illinois.

It is difficult to say what is causing the disparity, given the many factors going into the launch of a new market.

In Illinois, problems and lawsuits have hampered adult-use marijuana licensing as well as the state’s social equity program, which is aimed at getting more minorities and victims of the war on drugs involved in the cannabis industry.

Also, the lack of licenses and infrastructure while launching new markets can cause sales to be less than expected.

This was the case in 2018 when California marijuana businesses launched recreational sales but struggled with local bans and high taxes.

And it shows in California’s per capita sales during the initial 12 months.

While California consumers purchased about $1.5 billion worth of recreational marijuana products in 2018, that amounted to only $38.41 per resident.

It could also be an indication of the strength of California’s illicit market.

High taxes in California and Washington state could be pushing a significant number of consumers to purchase their marijuana from sources outside the states’ legal markets.

Washington state generated $54.70 in per capita adult-use sales during the first 12 months – or roughly the same as per capita sales in Illinois.