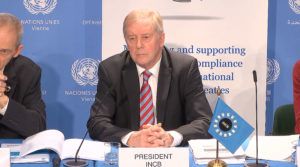 The president of the narcotics enforcement agency of the United Nations is questioning whether the agency’s decades-old drug conventions are outdated given global policy developments in recent years involving drugs such as cannabis.

During a presentation Thursday for the International Narcotics Control Board’s (INCB) 2019 annual report, President Cornelis P. de Joncheere discussed the developments taking place with regard to cannabis and synthetic drugs.

“We have some fundamental issues around the conventions that state parties will need to start looking at,” he said, adding, “We have to recognize that the conventions were drawn up 50 and 60 years ago.”

Joncheere said 2021 is “an appropriate time to look at whether those are still fit for purpose, or whether we need new alternative instruments and approaches to deal with these problems.”

Next year will mark the 60-year anniversary of the 1961 Single Convention on Narcotic Drugs.

Kenzi Riboulet-Zemouli, an independent expert on U.N. drug policy, told Marijuana Business Daily that the INCB “is the most authoritative international institution on drug policy – and also the most conservative in its interpretation of the conventions.

“Having the head of the INCB suggesting that the conventions are not fit for the challenges of the 21st century is already breaking a strong taboo.”

“It is possible and feasible for the international community to update international law,” Riboulet-Zemouli said. “Taboo is the only reason why there has not been any discussion about a new, a different or another drug treaty since 1988.

“Now that this taboo has been broken, perspectives will open.”

“One thing is certain: If the CND rejects the recommendations of WHO on cannabis, the divide between governments will increase,” Riboulet-Zemouli said. “If the deadlock surrounding cannabis policy reform persists in the coming years, it will likely accelerate the end of the policy regime of the conventions as a whole.”

Thursday’s INCB report for 2019 insisted – as it does every year – that recreational marijuana contravenes international drug control treaties.

The Vienna-based agency serves as the independent and quasi-judicial monitoring body for the implementation of U.N. drug conventions.

One of the INCB’s functions is to make recommendations about how to comply with the treaties.

However, the latest report’s foreword notes that the INCB “remains concerned at the legislative developments permitting the use of cannabis for ‘recreational’ uses.”

“Not only are these developments in contravention of the drug control conventions and the commitments made by States parties, the consequences for health and well-being, in particular of young people, are of serious concern,” the foreword reads.

The report mentions that “measures to decriminalize or legalize cannabis are proliferating in North America” and warns that consumption is increasing.

The report cites the sales of edibles in Canada and legalization in the U.S. state of Illinois as examples.

According to the INCB, “the discussion of different approaches to regulating cannabis has figured prominently in the policy debate on drug control across Europe.”

The report mentions “an increasing number of European countries” that are “exploring” or have already “established” medical cannabis programs.

“The majority of European countries allow cannabis to be used only for medical and scientific purposes, in keeping with their obligations,” the report notes.

“The developments in a few countries that have legalized or permitted the use of cannabis for non-medical purposes or that have tolerated its legalization at the subnational level are undermining the universal adherence to the three international drug control conventions and the commitment to their goals and objectives,” the report warns.

New Zealand gets a special mention in the report because of that nation’s upcoming recreational marijuana legalization referendum.

The INCB reiterated that “any and all legislative or regulatory measures aimed at the legalization of cannabis for non-medical purposes are inconsistent” with the international drug control treaties.

The agency “will continue to monitor policy and legal developments in New Zealand pertaining to drug control and encourages the Government of New Zealand to continue its constructive dialogue with the Board to ensure consistency with the drug control conventions.”

The report mentions an increase in the use of licit cannabis since 2000. It says that, until that year, only the United States used to report the use of some cannabis for scientific research.

After 2000, the report says, “more and more countries have started to use cannabis and cannabis extracts for medical purposes, as well as for scientific research.”

“Since the licit cultivation of cannabis for medical and scientific purposes has increased considerably in recent years, and the yield and manufacturing processes are not standardized, some data are being clarified with the relevant Governments to ensure consistency,” the report clarifies.