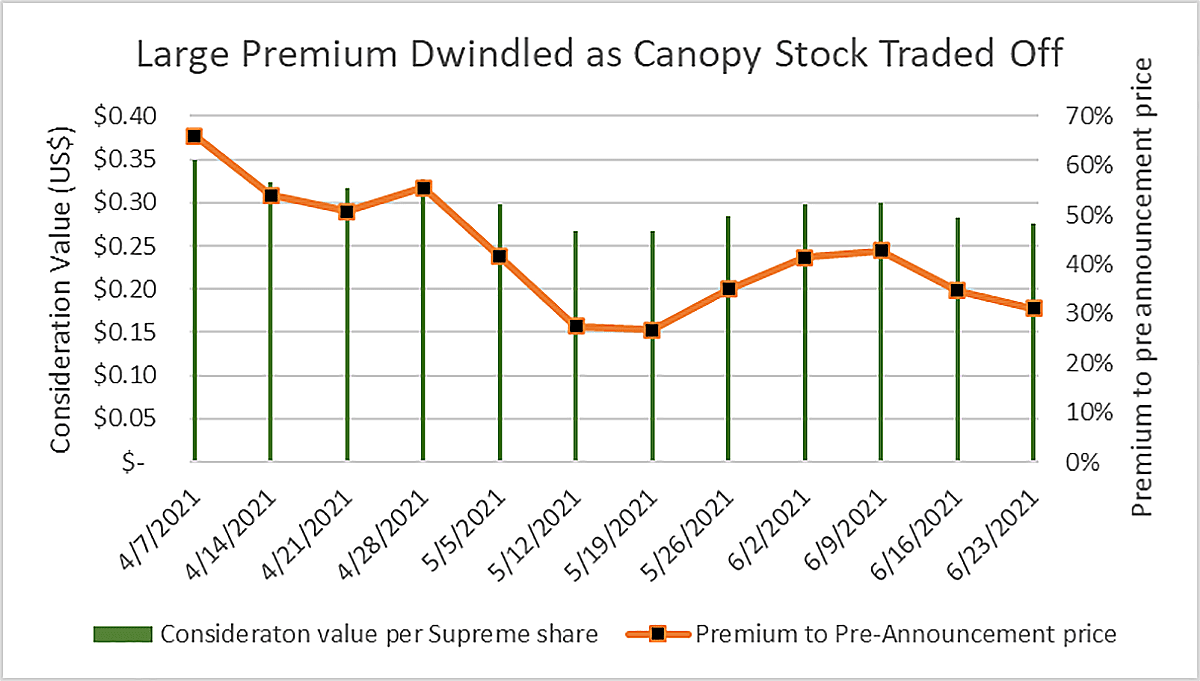 Is Canopy’s acquisition of Supreme Cannabis a sign of more consolidation to come?

While the market reacted negatively to the deal when it was announced in April – Canopy’s stock fell 5% after the announcement – there are some immediate positives for the Canadian cannabis giant.

At the original announcement, the consideration represented a whopping 66% premium to the stock price of Supreme.

Each outstanding Supreme share received 0.01165872 shares of Canopy Growth plus $0.0001 in cash. Canopy issued a total of 9.013 million shares, valued at $213.08 million based on Canopy’s closing price on the transaction date.

Why the negative reaction?

Investors were confused by Canopy’s investment in another Canadian operator in a market already plagued with excess supply induced by chronic pricing pressure. Canopy’s divestment of Canopy Rivers and increased investment in TerrAscend seemed to indicate a revised strategy emphasizing U.S. investments.

These concerns are depicted in the graph above, which shows the initial 66% deal premium declining as Canopy stock fell 21% after the announcement.

Canopy paid a very full price for Supreme. The chart below shows valuation metrics from the 21 Canadian cultivation and retail companies with market caps less than $500 million in the Viridian Value Tracker database.

Based on 2021 and 2022 revenue and EBITDA multiples, the Supreme purchase was completed at metrics above the 75th percentile of the peer group.

Still, we can understand Canopy’s attraction to Supreme.

Canopy’s bets on Canada’s Cannabis 2.0 do not seem to be bearing much fruit, and an investment in the premium flower segment is as good a place as any to draw a line in the Canadian sand.

The deal also is automatically EBITDA-accretive given Supreme’s positive number versus Canopy’s deeply negative one.

Supreme’s motivation to sell is perhaps the most interesting part of this deal. There’s the obvious deal premium, but we believe there is something more fundamental.

We have been commenting regularly on the huge gap in valuation metrics between the largest cap companies and their smaller brethren. This gap is adding fuel to the consolidation fire.

Facing a significantly higher cost of capital makes growth more difficult, so companies with market caps less than $500 million increasingly will find it advantageous to combine with larger competitors to ensure ongoing development and to essentially share in the valuation arbitrage.