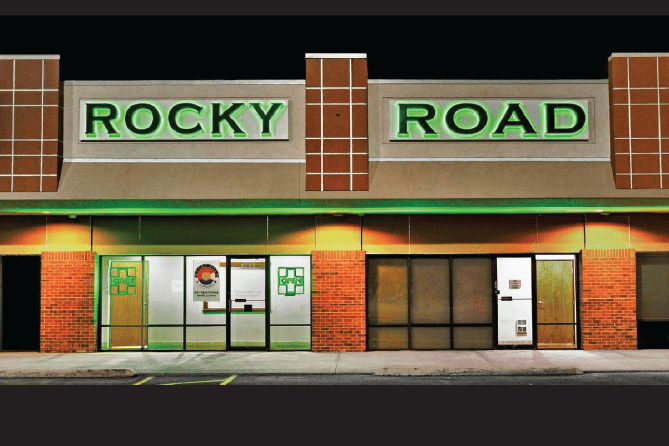 Securing prime property requires finding a good broker, doing a lot of your own legwork, and patience

He encountered many false starts and dead ends before finding the right spot in 2013.

“Some buildings would be great, but the landlord/owner would be unappealing,” said Cuthriell, president of the dispensary, which operates in a 1,000-square-foot facility. In other cases, the landlord was great, but the space or location was inadequate. Neighbor opposition also forced Cuthriell to look elsewhere.

He was working simultaneously on several locations to submit his business license application – when all but one collapsed.

Cuthriell finally found the ideal location with the help of brokers. But he also did a lot of his own legwork. And, like any wise homebuyer, he had his financing lined up before he began his search.

“I was fortunate I started early,” Cuthriell said. “I had time to introduce myself, my business plan, establish a rapport with my landlord and ultimately negotiate a position that was a win-win.”

Location can make or break a retail cannabis business. And Cuthriell was fortunate. He opened the Metropolitan Wellness Center in Washington’s popular Capitol Hill neighborhood, where the 2015 median household income topped $120,000, according to City-Data.com.

Cuthriell’s nearly year-long search underscores the hurdles prospective marijuana retailers face when shopping for a property. They can encounter many roadblocks, including restrictions on where operators can open a storefront as well as landlords who don’t want to lease the space. Below are tips for navigating the obstacles.

Rather than simply drive around neighborhoods yourself, enlist the help of a real estate broker. That person should have intimate knowledge of the geographic area as well as all local and state regulations and zoning requirements related to marijuana businesses.

You can find a broker through a Google search and by asking other successful owners of cannabis operations for recommendations.

A broker well-versed in the industry will keep a running list of suitable locations and be able to tell you how much it will cost to buy or lease the property.

According to Joel Meranski, a commercial real estate executive with Western Centers in Aurora, Colorado, information at the fingertips of a suitable broker should include:

Meranski recommends hiring a local broker who knows the lay of the land and the regulations, even though he himself has done deals in several states while a commercial real estate broker at the Denver office of a Seattle firm.

Why a local? It is unreasonable to expect brokers to understand the rules and regulations specific to every single state that permits recreational or medicinal marijuana sales.

Do Your Own Legwork

Cuthriell, for his part, worked with two different agents. He advises fellow marijuana entrepreneurs to not depend solely on brokers, though.

“Get in your car and knock on doors,” Cuthriell said. “Find the location that you think is best.”

Ask the owner of a building what it would take to lease the space for your business, he said.

“You have to be really aggressive, or you’ll get beat by the company that is,” Cuthriell said.

It’s also worth noting that marijuana retailers don’t need a lot of space. Cuthriell said most dispensaries have 2,000 square feet or less. That’s about the size of a typical freestanding Starbucks. Cuthriell, however, said he wouldn’t hesitate to take a larger space if the market is strong and your service is top-notch.

Know That Location is Key

But because marijuana shop owners often must locate at least 1,000 feet from schools, public parks and hospitals, not to mention each other, you will have fewer choices than other businesses.

It’s also becoming harder every day to find a good location, especially in established markets. Graff said “the problem is only getting more difficult,” pointing to “the increased demand in this industry” for space and “a finite amount of real estate.”

Also, be prepared to get rejected for an otherwise ideal site because of a recalcitrant landlord. Often, no amount of sweet talking – or even higher-than-market rents – will convince a wary landlord to lease you space.

“Efforts are regularly made to assuage any concerns of landlords. But as a real estate broker, I would be pushing an ethical boundary if I didn’t acknowledge the legitimate concerns of these landlords,” Graff said. “The federal status of marijuana creates a thick cloud of uncertainty that is undeniable.”

However, regulations can create a silver lining: They can reduce competition. The importance of location is reduced slightly in areas where the number of retail licenses is capped, according to Cuthriell. That’s because there is little concern that two businesses will locate on the same block and compete for the same customers, he said.

“In states where governments thoughtfully assign licenses in a geographic spread, you may enjoy the ‘if you build it, they will come’ effect,” Cuthriell said.

Parking is another key consideration. It’s helpful to have at least three to five parking spaces reserved for your clients if you are in a stand-alone building, said Meranski of Western Centers.

Your parking spaces will likely turn over every 10 to 15 minutes, although some customers familiar with the products will be in and out of your store in less than five minutes, Meranski said.

If the retail outlet is in a strip shopping center, he added, dedicated parking spaces are not as important. That’s because the other consumers who are there to buy a bottle of wine, visit the gym or have lunch will free up adequate spaces in a timely manner.

Weigh the Demographics, Nearby Shops

As with any shop, a marijuana retailer benefits from being on a busy street that can attract drive-by customers. It’s also helpful to be near high-density, luxury apartment buildings that attract young professionals, who can easily walk to your establishment.

On the other hand, apps such as WeedMaps and Leafly will help customers find you if your dispensary or rec shop is off the beaten path.

All retailers benefit from traffic from other nearby stores. That’s why you find barber shops near grocery stores, for example. A hair cutter likes the walk-by traffic generated by a grocer.

“Unfortunately, due to the difficulty locating suitable space, most clients don’t have the luxury of getting this granular into location preference,” Graff said of marijuana business owners.

And in some markets, there are no options for new cannabis stores, Meranski said.

A case in point is Aurora, Colorado’s third-largest city. Aurora issued 24 retail marijuana licenses to qualified operators and they are all spoken for, he said.

“If you were lucky enough to have your name picked out of a hat, you hit a gold mine,” but now there are no additional locations available in Aurora, Meranski said.

In markets that cap the number of marijuana retailers, don’t even think about seeking a license unless you already have a space under control, he said. Communities with license caps almost always require license applicants to have at least an option to lease a specific space before a license is grated.

For the bigger players looking to expand their marijuana retail portfolios, the best option may be to snap up floundering mom-and-pop operations, Meranski said. Smaller businesses can’t compete with the big operators on quality, cost and service, he said.

The small operators are being bought out by big names, much the way the defunct video rental company Blockbuster in its heyday bought out mom-and-pop operators renting out videos from garages and storefronts.

The big players increasingly are not interested in buying “one-off” deals, such as a single store sandwiched between a hair dresser and a tattoo parlor.

“What they want to do is buy 10 or 12 dispensaries and maybe two grow houses in one transaction,” Meranski said. “Basically, they are buying out their competition.”