Despite being a top cannabis market in the United States, Michigan largely has been ignored by multistate operators because of the low barriers to entry for new licensees.

However, with plenty of market growth and heavy fragmentation across the supply chain, the state offers a compelling opportunity for efficient private operators.

Michigan’s unlimited licensing for new businesses has spurred heavy fragmentation of market share in both cultivation and retail.

The fragmentation, in turn, has caused price compression. Initially, this was offset by consumer demand, with recreational sales per dispensary peaking at $5 million in April 2021. However, demand has slowed in recent months, and prices have continued their decline.

This highly competitive environment has kept most publicly traded companies away from Michigan.

After 1½ years of recreational cannabis legalization, the market still is not showing signs of consolidation. The largest retail operator owns only 6% of the market, and the largest licensed cultivator owns less than 5%.

This lack of consolidation has led to specialization.

Except for vertically integrated Lume Cannabis Co., the leading operators in the state focus on only one area of the supply chain.

LivWell Enlightened Health, for example, has the leading market share in licensed cultivation and is exclusively wholesaling in the state.

On the other side of the scale, 3Fifteen Cannabis, a leader in dispensary market share, does not have any recreational cultivation.

This supply-chain specialization also proves to prospective investors that less capital can be leveraged to grow market share in a core business function rather than via vertical integration.

The capital generated from specialization can be used to expand the core business or across the supply chain.

As the market matures, consolidation likely will follow. The strongest players in their respective areas of the supply chain will move into vertically integrated businesses, but this will take time because it also requires stabilized pricing and asset counts.

Continued price compression as well as growth in the number of retailers should keep the cannabis industry leaders at bay, allowing the most efficient private operators to establish market share.

Industry leaders will inevitably pay to acquire that share once the market reaches maturity.

Michigan is a rare opportunity for smaller operators to potentially conquer a top market through operational efficiency.

It’s also an opportunity for investors to identify discounted valuations that could drastically expand if they can identify the best operators.

Lenders look toward legalization in Body and Mind financing deal

The transaction highlights the high cost of debt financing for small cannabis companies, and it illustrates how complex these deals can be and why the actual cost is often quite different from the announced interest rate.

In addition, the deal includes both explicit and unstated prepayment penalties that show that cannabis lenders are fully aware that the cost of debt for cannabis companies is likely to fall significantly as federal legalization develops. 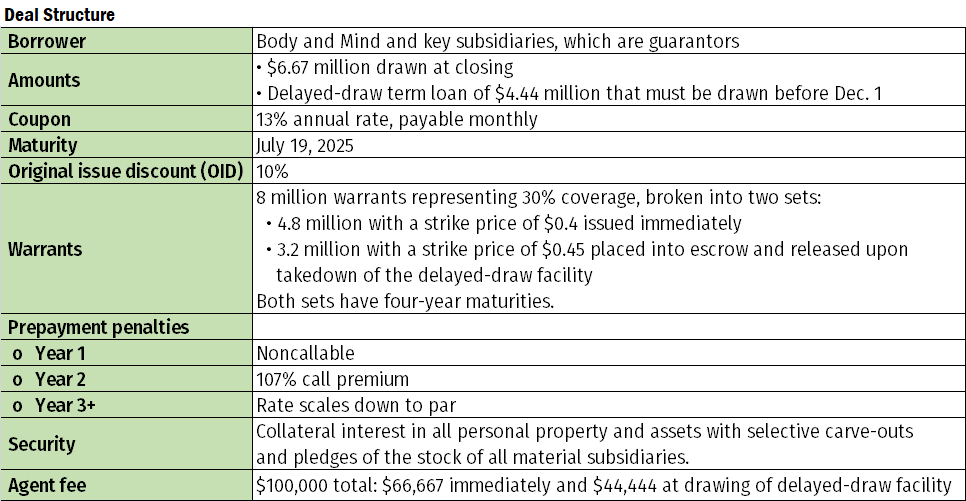 Effective cost is calculated by subtracting all warrant values, OID and fees from the loan proceeds and calculating a yield to maturity using the discounted proceeds. Our calculations reveal a 19% effective cost of the BAM loan.

Tilt Holdings also closed a revolving credit deal this week – but at a much lower 6.75% rate (prime plus 3.5%).

The main reason for the more favorable terms: The Tilt deal is a standard asset-based revolver of its Jupiter subsidiary (a non-plant-touching and, therefore, federally legal business). Tilt is also significantly larger, with a $175 million market cap compared with BAM’s $39 million.

Although the current transaction increases BAM’s leverage, Body and Mind is still an excellent credit, as shown in the table below, which highlights the top 5 ranking credits from the 22 U.S. cultivation and retail companies tracked in the Viridian Credit Tracker.

Body and Mind ranks as the second-strongest of the group and maintains this relative ranking pro forma for the financing.

Accordingly, current lenders are including prepayment penalties to protect against this eventuality.

Because of these provisions, BAM received only 90% of the principal amount it borrowed, but any prepayments are calculated at 100%.

That penalty is the difference between the 107% and the 90% – a pretty big hurdle to overcome before refinancing would make sense.

Lawsuit that could have delayed Illinois cannabis business licensing dropped