Challenges by rejected medical cannabis license applicants have inundated Missouri regulators, despite state efforts to avoid such a mess by hiring an independent third-party scorer.

Rejected small-business applicants complain that arbitrary scoring processes shut them out of a market designed to remain largely locally owned, while multistate cannabis operators (MSOs) won a big chunk of the licenses. The jilted applicants face thousands of dollars of expenses – costs that most startup businesses can ill afford – to appeal their cases.

Meanwhile, some rejected MSOs also allege they were victims of flawed, capricious and inconsistent scoring.

Such gripes generally mirror those in other marijuana markets across the nation.

But complaints filed by rejected medical marijuana business license applicants in Missouri seem strikingly high compared to other states: The number of appeals skyrocketed past 500 as of Thursday, according to a staff attorney at the state Administrative Hearing Commission.

A St. Louis Post-Dispatch report this week also pointed to other issues, such as multiple licenses won by entities connected to board members of the Missouri Medical Cannabis Trade Association and by entities with troubled histories.

Common concern in the marijuana sector

Regulators put forth what they believe are airtight and objective rules for evaluating applications, but almost every state winds up in the same place: litigation and administrative hearings costly to cannabis business applicants and states alike.

“It just sort of shows we haven’t perfected this process yet,” said Rachel Gillette, a Denver-based cannabis attorney with Greenspoon Marder. “We still have a lot of things to think about when it comes to licensing.”

Gillette said her view is that a scoring system, even when an independent third party is involved, can become arbitrary.

“I think that’s where it goes sideways. It’s up to one person’s judgment,” she said.

Cannabis businesses highly anticipated the launch of the Missouri medical cannabis program, which is projected by Marijuana Business Daily to hit $300 million a year in retail sales within a few years.

The state took in more than 2,200 applications for 192 dispensary, 60 cultivation and 86 processing licenses.

It remains to be seen whether Missouri now will be compelled to issue additional permits to resolve disgruntled applicants’ claims.

That’s happened in many other states – to the point that businesses increasingly are building possible appeals into their application strategies.

It’s uncertain whether legal challenges could delay the launch of Missouri’s MMJ program, scheduled for this spring.

At least one lawsuit has challenged the constitutionality of the process, alleging that Missouri’s cap on cultivation licenses violates a state constitutional “right to farm.”

Lisa Cox, communications director for Missouri’s Department of Health and Senior Services, recently told MJBizDaily that “at this time, we do not anticipate any delays to the program rollout due to litigation.”

Gregory Wu, co-chair of the cannabis practice at Shook Hardy & Bacon in Kansas City, Missouri, is representing a couple of clients in their appeals including a female-owned applicant with a minority partner.

He said scores weren’t consistent with his clients’ experience and background. “From our perspective, the state is unfairly erecting barriers to entry that are affecting small-business owners,” Wu noted.

However, some multistate operators such as Illinois-based Cresco Labs and Green Thumb Industries also were rebuffed in their efforts to win licenses.

Yet, as Cresco pointed out in its multiple appeals, other multistate, publicly held operators such as Arizona-based Harvest Health & Recreation and Illinois-based Verano Holdings won a number of licenses.

Cox wrote in an email to MJBizDaily that she couldn’t comment on specific applicants but noted that denials were issued for several reasons, including:

Missouri required that cannabis businesses prove they are majority owned by individuals who have been residents for at least a year.

Veracious founder Chad Westom said he believes the state came up with a “well-thought-out process with blind scoring and many layers of objectivity.”

“So far, there’s a reasonable and defensible explanation for every question,” he maintained during a recent interview with MJBizDaily.

For example, a horticulturist on staff would generate a good score on a cultivation application, but that kind of background “isn’t going to help an edible maker,” Westom said.

One applicant told MJBizDaily that scores also had varied dramatically for the same answers within the same facility category.

It’s unclear how long it will take for appeals to be heard and resolved.

The state typically has 30 days to respond to a complaint, and a case that advances would be heard in front of an administrative law judge. But it’s difficult to predict the timeline given the mountain of appeals.

In the meantime, Wu said, the rejected applicants “have a lot of costs and are not able to move forward.”

The state also faces additional costs. It recently put out a request for proposals to retain up to three law firms on an hourly basis to defend the license application denials. 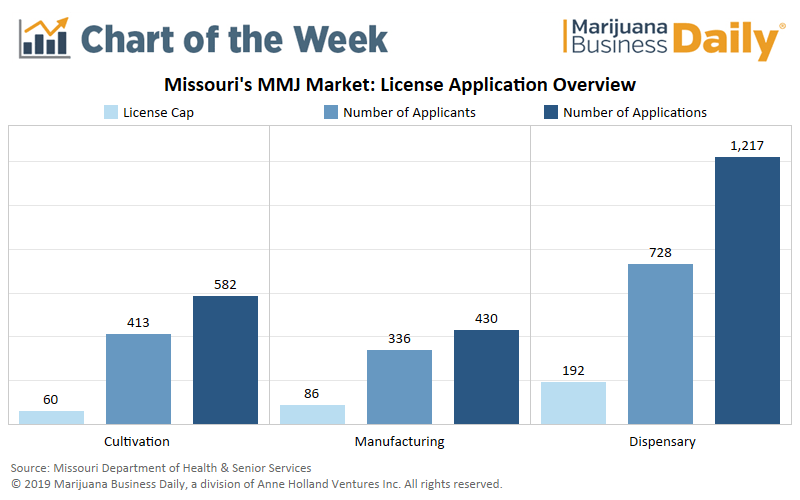