(This is the first installment of a two-part series on state-level marijuana legalization efforts coming in 2018. Part I looks at ballot measure campaigns. Part II looks at legislature-driven measures.)

It won’t be easy to top the landslide 2016 electoral victories for marijuana, but advocates are looking to make serious headway across the country once again on statewide ballots next year.

Campaigns are underway in at least five states to legalize either medical or recreational cannabis.

And, according to early polling numbers, most if not all stand a good chance of getting the thumbs-up from voters in November 2018.

ADVERTISEMENT
If successful, these campaigns could further open up new markets for significant business opportunities in the cannabis industry.

Here is Marijuana Business Daily’s roundup of the top state cannabis campaigns for 2018. The list doesn’t include some smaller-level movements that are more symbolic attempts at legalization.

Initiative: Michigan Regulation and Taxation of Marihuana Act, by the Coalition to Regulate Marijuana Like Alcohol.

What it would do: Change state statute to legalize recreational marijuana.

Status: Over 100,000 collected so far, and a campaign spokesman predicted signatures will be submitted to the secretary of state by mid-October. The campaign’s goal is to reach 360,000 signatures.

What it would do: Amend the state constitution to legalize medical marijuana.

Status: A campaign spokesman said volunteers have already collected more than 50,000 signatures, meaning the campaign is well on its way to making the ballot. New Approach Missouri intends to employ paid signature gatherers beginning this fall.

Status: The Oklahoma ballot measure is the only one so far assured of a place on the 2018 ballot, since the campaign gathered and submitted all the necessary signatures to make the 2016 ballot. Only a last-minute legal fight kept the initiative from appearing on that year’s ballot, so it’ll go before voters in November 2018.

There are at least two potential cannabis legalization ballot measures that are gaining steam – one to legalize medical and another to legalize recreational – and both are being pushed by the same campaign.

Status: A spokeswoman said the campaign has already collected about three quarters of the signatures needed to make the 2018 ballot, for both initiatives.

Latest polling: No scientific polling data from South Dakota on marijuana is available.

What it would do: Change state statute to legalize recreational marijuana.

Status: The campaign just began circulating petitions in mid-August, so it’ll be a while until it makes serious headway. But a campaign spokesman said its goal is to have more than enough signatures to make the ballot by January, before the next state legislative session begins.

Latest polling: According to two surveys conducted earlier this year, support for the MMJ initiative is already at 77%-78%.

Chart: Portion of women executives in cannabis industry dips to 27% but still strong 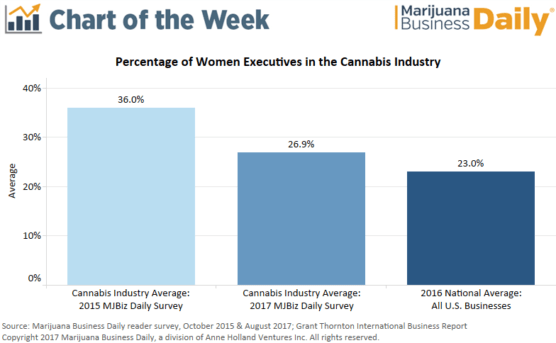 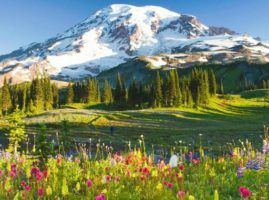