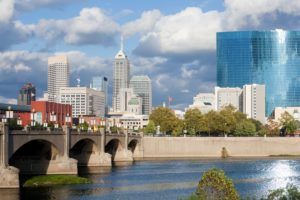 From taking the letters C-B-D off labels to moving product out of state, companies selling cannabidiol in Indiana say they’re managing just fine with ongoing legal confusion about the product.

And they say the state’s CBD mess is boosting sales and awareness of the cannabis-derived treatment.

“We’ve had a run of product over here in the last couple weeks,” said John Taylor, COO of Commonwealth Extracts, which makes hemp-derived CBD in Louisville, Kentucky, and sells to stores including Indiana locations.

Indiana has been wrestling with CBD confusion for months. It started in April, when the state passed a law allowing children with certain kinds of epilepsy to possess CBD.

But the law had the unintended consequence of seeing law enforcement take CBD products off shelves in stores that had been selling them for years: Some police interpreted the law to mean CBD is illegal for anyone else, regardless of where the CBD came from or if it was legally produced.

Confused? So are Indiana retailers and CBD distributors, which are getting mixed signals from top officials on a near-weekly basis.

Then, this month, he told Indianapolis TV station WXIN that Indiana stores won’t be sanctioned for selling CBD as long as it contains no THC.

He also noted that the state legislature is working on a bill to clarify the rules.

“Consumers were frightened and scared and not sure if they were using something illegal or not,” said Austin Rhodus, CEO of DREEM Nutrition of Kokomo, Indiana, which distributes CBD oils to Indiana health food stores, chiropractors and spas. “It caused a lot of confusion.”

Indiana’s CBD story hasn’t been all bad for the cannabis industry, though.

That’s because the legal confusion has been followed closely by Indiana’s news media, which explain in each story what CBD is.

“It was really kind of a blessing in disguise,” Rhodus said. “It not only increased sales, it created a huge platform to educate on.

“We have people going to stores, literally buying everything they have on shelves because they didn’t want stores to run out of it.”

Another CBD maker who has been through product seizures says Indiana officials are likely realizing they could err by seizing products if a judge doesn’t side with their interpretation.

“Indiana is opening itself to potential legal action,” said Michael Brubeck, CEO of Centuria Natural Foods, which makes CBD products sold in Indiana and other states.

Rhodus says he’s heard of some CBD producers in Indiana moving goods out of state.

So he’s taking the step of sending a 14-page letter to potential retailers in which his company’s lawyer argues that CBD is legal in Indiana.

Other CBD makers say they are playing it safe and labeling products as “hemp oil” in Indiana.

“We don’t label our product as CBD, and that’s one of the main reasons, the confusion,” said Ashley Grace, co-founder of The H. Hemp Company in Boulder, Colorado, which extracts cannabidiol from hemp for sale in Indiana and other states.

“When you start calling it CBD, which is what consumers call it, you run into trouble.”

H. Hemp also sells its extracts, tinctures and balms through chiropractors and naturopathic doctors, who aren’t traditional retailers and may be less likely to see police checking their shelves.

“We have to operate in this area of confusion,” Grace said.

Still, no one is predicting an end to the CBD market in Indiana.

“We’ll get this worked out the right way,” Rhodus said.

Kristen Nichols can be reached at [email protected]