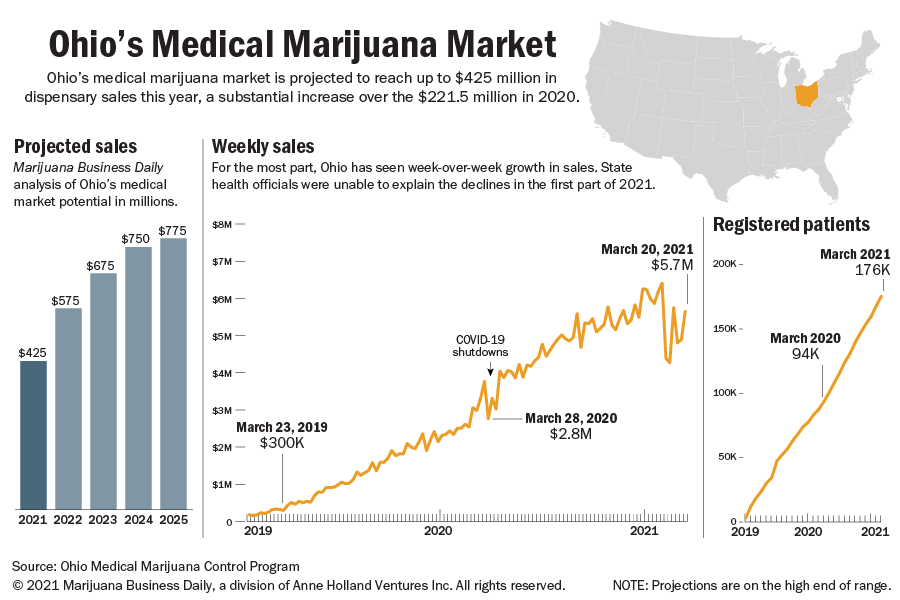 After a bumpy start, Ohio’s medical marijuana market is strengthening and prospects for long-term sales growth are brightening.

But the market is appealing because of its limited licensing structure, its large population – roughly 12 million people – and prospects for adult-use legalization in the not-so-distant future.

“It’s a potential $400 million market this year, and there’s plenty of growth in sight,” said Nate Reid, vice president of commercial strategy for Illinois-based Cresco Labs, which has cultivation, processing and dispensary licenses in the state.

“It was a good year last year even during the pandemic. It seemed like we were hitting record sales month-by-month.”

The market overall has been slower to develop and is more restrictive than neighboring Pennsylvania.

Ohio medical marijuana sales were running at only about $2.5 million a week before the coronavirus pandemic erupted a year ago.

There have been some choppy weeks since, but sales now are hovering at $5 million to $6 million a week, according to recent sales data.

Marijuana Business Factbook projects Ohio MMJ sales will reach $350 million to $425 million this year, a substantial increase over $221.5 million in 2020. (See chart above.)

The Factbook projects sales will increase to a half-billion dollars a year by 2022 or 2023.

The number of registered patients stood at 176,387 as of March 19, according to a recent state program update, nearly double the number a year ago.

But there clearly is more room for growth. Reid notes that Ohio has a relatively low patient participation rate and is stringent on potency levels and purchasing limits.

Ohio regulators set 2.83 grams or a tenth of an ounce – often referred to as the “Ohio Tenth” – as the daily dose for medical marijuana patients in establishing 90-day purchase limits.

Reflecting that standard, Cresco sells marijuana in tenths of an ounce rather than the popular quantity of eighths, Reid said.

“We think the (restrictions) have held back not only participation but what the existing patient base wants to spend,” he said.

Ohio MMJ sales have lagged behind such medical marijuana states as Illinois, Maryland and Pennsylvania.

But that gap is closing, and it’s clear the market is seen as tremendously attractive with cultivation and processing licenses commanding prices in the range of $10 million each.

For example, up-and-comer multistate operator Ayr Strategies – which is based in New York and has offices in Toronto – announced an $18.2 million deal late last year to buy a 9,000-square-foot processing facility in Ohio and acquire exclusive management rights to a 58,000-square-foot cultivation facility under construction.

Ayr CEO Jon Sandelman said at the time: “Our strategy has always been to go deep in the best markets, targeting attractive assets in limited-license states with large populations, where we can build a vertically integrated presence and have a significant edge.”

Reid talks about a similar “playbook” when discussing Cresco’s interest in Ohio: a potentially high-growth, limited-license market “that has a large addressable population.” Ohio is the seventh-most-populated state in the U.S.

Cresco was the first to open a dispensary in Ohio, has a large cultivation operation and is in the process of building out a processing facility with a planned launch in the second quarter.

The company recently closed on an acquisition of four additional dispensaries in Ohio, bringing Cresco to the maximum five dispensaries.

A number of other MSOs are in the market as well, including Columbia Care, Curaleaf, Green Thumb Industries, Harvest Health & Recreation, PharmaCann and Verano Holdings.

But there’s plenty of locally owned businesses as well, such as Buckeye Relief, which rivals the top MSOs as one of the most prominent operators in the market.

Ohio’s Supreme Court recently ordered state regulators to act on an application by Fire Rock to double its cultivation capacity.

Jennifer Jarrell, deputy communications officer for the Ohio Department of Commerce, wrote in an email to Marijuana Business Daily that the state is “currently reviewing the expansion request (by Fire Rock) and will make a decision in accordance with the Ohio Supreme Court’s order.”

“One of the big problems is the lack of available trim for processors, and part of that is existing operators aren’t being permitted to expand their operations,” Haren said.

If Ohio regulators grant Fire Rock’s request to expand, “I would expect almost everybody who has the capability to expand” would apply to do so, Haren said.

“The demand is there, and (operators) can’t meet it with the level of supply in the market,” Reid said.

Adult use – when, not if

Haren also said he expects a new round of dispensary licensing this year, perhaps in the summer or fall.

He noted only one dispensary round has occurred to date. The state issued 57 provisional dispensary licenses, with 52 receiving certificates of operation, according to state data.

Ali Simon, spokeswoman for the state Board of Pharmacy, confirmed the board is considering a second dispensary round, possibly by lottery.

But “as of yet, no announcement has been made regarding the terms or timing of such a request,” she wrote in an email to MJBizDaily.

It’s unclear when adult-use legalization will be considered in Ohio.

A citizen initiative to place the issue on the ballot in 2020 failed, largely because proponents had difficulty collecting signatures during the coronavirus pandemic.

But Ohio likely will feel the growing pressure to legalize recreational marijuana or face the possibility of losing out on tax revenues.

Neighboring Michigan launched its recreational marijuana program in late 2019, and Pennsylvania is considered likely to legalize adult use in the near future – perhaps this year.

Haren said lawmakers also must think about what control they might lose if marijuana is legalized federally.

“That’s a good reason for the state Legislature to be proactive,” he said. “If we do nothing and the federal government deschedules, that would mean legal and unregulated marijuana, and that’s a bad thing, with bad policy outcomes.” 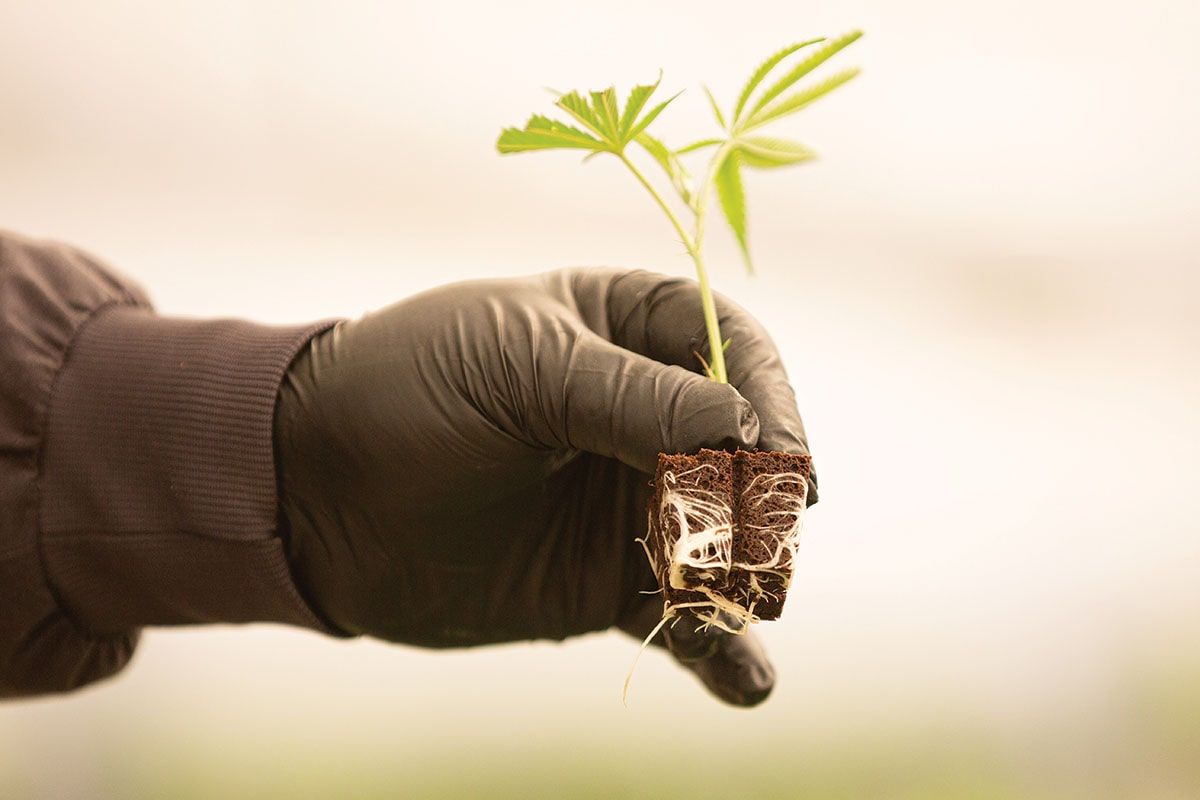