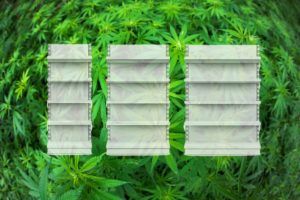 The increasingly competitive cannabis market is fostering a pay-to-play mentality among both marijuana retailers and the brands they carry.

Known as slotting fees, the practice requires brands to pay anywhere from $500 to $15,000 a month for premium space on marijuana retailers’ store shelves.

Cannabis industry experts recommend marijuana brands build the fees into their budgets because they can cut into their profit margins. The fees are not tax deductible.

While slotting fees are common among mainstream retailers, many in the cannabis industry are just starting to encounter them.

Slotting fees could have repercussions in a fledgling industry such as cannabis, though they already are common in California.

“In an early market, it’s a slippery slope because it can really affect the customers’ perception of a product’s quality,” said Shane Terry, CEO of TapRoot Holdings, a vertically integrated cannabis company in Las Vegas.

“I don’t think it’s something we can stop unless the state decides to regulate it, but as a practice, I’m personally a little concerned about it for the industry.

“As customers are pushed toward a product and don’t have as good of an experience as they would with another brand, it could damage the dispensary operation.”

But it’s important that cannabis brands project their sales carefully and understand what slotting fees would do to their margins, she noted.

“It would be a high-volume store that sells 5,000 units a month,” Whiteman said. “If you’re paying $5,000 a month in slotting fees, you’re taking at least a dollar off a unit.

“If you’re selling 1,000 units, you’re taking $5 off your price. There’s no scenario where that makes any long-term sense.”

Under Section 280E of the IRS tax code, marijuana businesses are barred from taking federal tax deductions for expenses that are related to selling federally illegal goods. That situation, Whiteman said, makes slotting fees in the cannabis industry different than when mainstream retailers use the practice.

She noted that, “in any other industry, it would just be considered a marketing expense and you would deduct it.”

Slotting fees in cannabis first cropped up in 2018 in California, where some retailers were asking anywhere from $1,000 to $50,000 a month, depending on how much shelf space they wanted and in how many stores.

Now, it’s spread to other states like Nevada, and companies like Planet 13 – which serves 130,000 people a month – have created premium partnership packages available to all vendors.

Planet 13 has 50 televisions throughout its complex that vendors can use to expose consumers to their brands.

Planet 13 also allows select partners to participate in its Planet Palooza event, which showcases the retailer’s premiere brands to its customers, 85% of whom are tourists.

“What we try to do is provide value for those brands,” said David Farris, Planet 13’s vice president of sales and marketing. “The idea is that it translates into revenue for them.

“We provide services, and we hope that that provides value for them. Las Vegas is a destination, and we’re a destination.”

Planet 13 vendors that paid the store for shelf space early on are grandfathered in at lower prices.

Shauntel Ludwig, director of sales and marketing for Las Vegas-based vaporizer manufacturer DaVinci, said many dispensaries that charge for shelf space refer to it as merchandising fees.

“They provide a lot of services in terms of allowing brands to come in and do training and pop-up events,” she said. “What we’re doing is trying to play it smart.

“Retail activation is a huge opportunity. You have a captive audience already in the store looking to make a purchase.”

Merchandising fees give brands control over how their products are positioned and displayed.

DaVinci, for example, asks dispensaries to display its vaporizers inside the open box rather than exhibit them outside of and in front of the box. The company also asks retailers to display all the colors the vaporizers come in.

“Even if the person selling isn’t knowledgeable about our products, the consumer can see it and make up their mind whether that’s for them or not,” Ludwig said.

DaVinci is creating a portfolio of programs that can be implemented in stores of varying sizes, Ludwig said.

The plans range from purchasing top-shelf placement to displaying posters. For larger spaces, DaVinci could have a free-standing podium displaying collateral about the company.

DaVinci views merchandising fees as the cost of doing business and is building the expense into its business-to-business marketing budget. The company will measure store sales month-over-month to determine whether its efforts are effective, Ludwig said.

“We’re going to the retailers before they demand the slotting fee and just offering it,” she said. “It’s more important not to just hope you can put a podium in a store. It’s also making sure you have opportunities to go in and do full-store trainings and have employees guide the customer to a fully set-up display.”

More established brands are prepared to create higher levels of in-store merchandising – and are willing to pay for it, Ludwig said.

But smaller companies are going to have issues with it. She also said that larger, corporate dispensaries rather than smaller mom-and-pop shops are more likely to charge slotting fees.

“The slotting fees are still relatively new in the cannabis space, but they’re so common in other retail,” Ludwig said. “We look at this as an opportunity to control position, layout and customer display.”

Some larger brands spend money on marketing and shelf space but don’t produce much of their own product to put there, said Nic Easley, CEO of Denver-based cannabis consulting firm 3C.

Instead, they’re purchasing products from other companies and repackaging them as their own.

“It’s not just that they’re mass producing,” Easley said. “They use their licenses, invest in marketing and shelf space, then loop back around and find supply.

“They won’t have consistent quality of products.”

Margaret Jackson can be reached at [email protected]