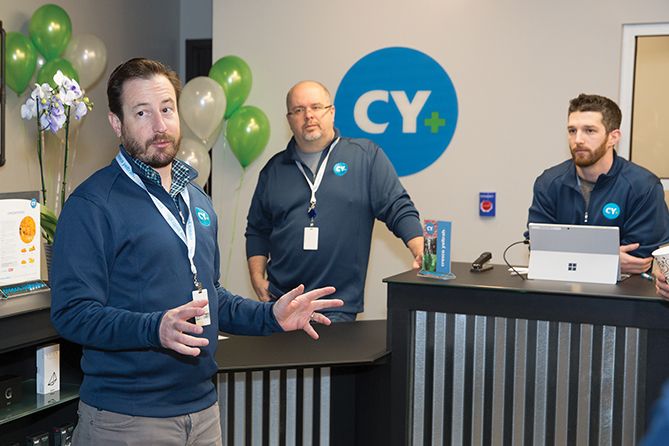 When it comes to Pennsylvania’s newly launched medical cannabis industry, Cresco Labs warrants bragging rights. In February, the company’s dispensary – about 30 miles northeast of Pittsburgh – was the first in the state to begin sales.

Moreover, Illinois-based Cresco, operating in Pennsylvania as Cresco Yeltrah, started as the only licensed medical marijuana business with an operational grow. Rival dispensaries, once they opened, were forced to stock Cresco supplies.

To get up and running in Pennsylvania, Cresco relied on the experience gained establishing medical marijuana operations in Illinois. The company also participated in the public rulemaking process, garnering intimate knowledge of the regulations set forth by the Pennsylvania Department of Health. And Cresco teamed with local partners to get its cultivation and retail facilities located and built, so the company could start growing its crop and hit the ground running.

“We were the first grow processor to have products available Feb. 15,” said Charles Bachtell, CEO and co-founder of Cresco Labs. “We ended up doing this a month to a month-and-a-half faster than anybody else.”

In Pennsylvania, Cresco Yeltrah started out with capsules, topical lotions, vaporizing pens, concentrates and Rick Simpson Oil, or RSO. As of Feb. 15, the company delivered product from its cultivation and manufacturing center in Brookville to six dispensaries, including CY+, its location in Butler, Pennsylvania.

In addition to its roughly 4,000-square-foot dispensary in Butler, Cresco Yeltrah is planning to build a dispensary in Pittsburgh and another in southwestern Pennsylvania.

Cresco opened its first medical marijuana facilities in Illinois in 2015. Since then, the company has expanded to Nevada and is working on becoming operational in California, Ohio and Puerto Rico. The company also is looking to enter Arizona, Florida or New York.

Lawmakers decided the Keystone State initially would issue permits to 25 or fewer growers and processors. Dispensary locations were capped at 150. In addition, only five grower/processors would be issued dispensary permits.

“A regulated program is of the utmost importance to us, and Pennsylvania definitely designed its program that way, to the point where they don’t have flower and they don’t have edibles as available forms,” Bachtell said.

Cresco started its work in Pennsylvania before the state released permit applications for the medical cannabis program in January 2017. Early on, staff met with the Pennsylvania Department of Health, which was tasked with implementing the program. Cresco provided feedback and input on proposed rules, when possible, Bachtell said.

The understanding helped Cresco know what the state wanted. For instance, the company knew early on that edible and flower sales initially would not be allowed, and dispensaries would be limited to operating in one of six regions in the state. The company used these insights when submitting its application to state regulators during the Feb. 20-March 20, 2017, filing window.

While Cresco Labs was exploring its options in Pennsylvania, a mutual friend connected the team with Michael Hartley and his sons, Trent and Kent. The family was interested in pursuing its own cannabis operations, Bachtell said, and was integral in helping Cresco win approval and get the grow and dispensary facilities ready.

Bachtell estimates that entering a new market costs between $5 million and $12 million. Finding the Hartleys meant Cresco could share the costs of entering Pennsylvania. The family also played a key role in securing the sites in Pennsylvania where Cresco Yeltrah would build and oversee construction of the cultivation center and dispensary. In addition, the Hartleys garnered support from neighbors and officials; some of that support showed up as letters included in the applications to state regulators.

“One of the reasons why the community was even open to the idea of medical cannabis coming in is because the Hartleys would be involved,” Bachtell said.

From the start, Cresco focused on being project-ready.

“We wanted to show the state, ‘You hand me a piece of paper, I have a shovel in the ground the next day,’” Bachtell said. “We don’t have to go out and raise capital, we don’t have to find property, and we don’t have to do drawing for the interior. We do all of that pre-application.”

Part of being shovel-ready meant meeting with government planning officials in the counties where Cresco Yeltrah planned to build its dispensary and cultivation facility before its permit applications were approved.

Speaking with authorities early about renovating its 46,000-square-foot cultivation center in Brookville and building its dispensary in Butler allowed the company to start construction shortly after it received permits. The grow project is planned to be completed in phases. The initial round included about 20,000 square feet and kicked off in June 2017, Bachtell said.

Pennsylvania awarded Cresco Yeltrah the state’s first grower/processor permit in October 2017. Officials signed off on the company’s secure growing environment being fully operational, so the cultivation process could begin immediately.

At the time, Cresco noted in a news release that “a full grow cycle takes approximately 120 days,” positioning the company to have product on retail shelves statewide in February 2018 – a target the company hit.

“We were able to get plants growing faster (than our competitors) because we completed our construction faster than them,” Bachtell noted.

While construction was underway, Cresco formed a “mobilization team” comprised of executives, managers and team members from the company’s Illinois headquarters. The team was assembled to hire and train new staffers for key director roles in Pennsylvania.

After getting a tour of the Illinois facilities and briefings on the operations, the entire group went back to Pennsylvania to get cultivation and retail facilities up and running, with the goal of phasing out the Illinois staff.

In October, Cresco held a job fair in DuBois, Pennsylvania, to find employees including sales representatives, cultivation agents, packing agents, an extraction agent and a lab manager. Previous work in the cannabis industry was not required.

Bachtell said he wanted workers to come from within the state. He ended up with about 35 full-time employees in Pennsylvania and about 110 across the company’s operations in five states and Puerto Rico. The front-end planning and hiring work – in addition to the initial approval – allowed Cresco to get a leg up on competitors. The company saved even more time getting to market through its previous experience in Illinois.

“We have standard operating procedures,” Bachtell said. “We know how to grow it; we know how to process it; we know how to package it – we have the packaging already. We didn’t have to develop any of that stuff again. That’s what we’ve done over the last three years is really develop a brand. We’re very familiar with seed-to-sale compliance software, tracking and all those things that maybe some guys that are newer
to the industry have to learn.”