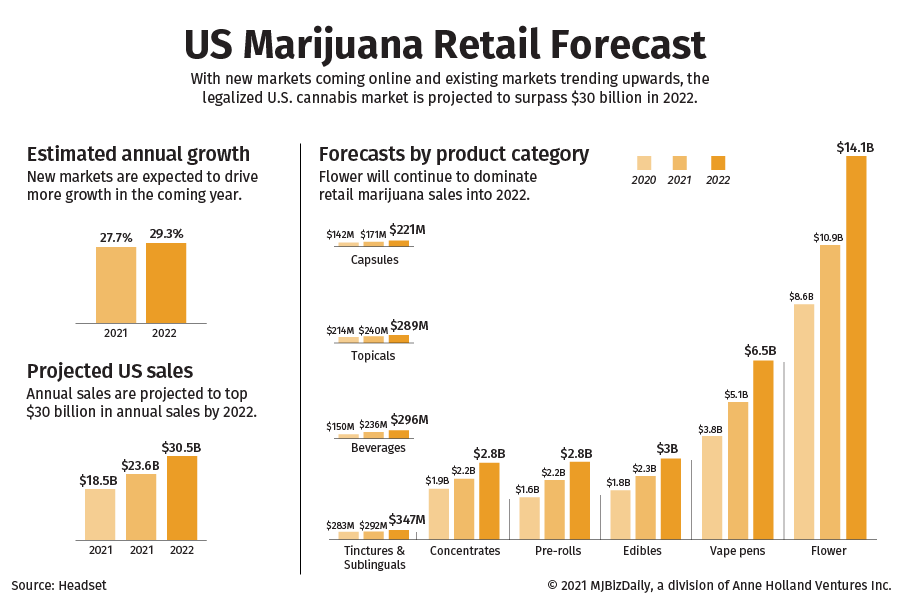 With new markets coming online and existing markets trending upward, legal cannabis sales in the U.S. are projected to surpass $30 billion in 2022, according to an updated long-term forecast by Seattle-based marijuana  analytics firm Headset.

This latest forecast includes impending recreational marijuana markets in New Mexico and Connecticut and a medical market in Alabama as each is set to begin retail sales at some point in 2022.

Though some of those markets will be open for business for only part of 2022, the total annualized first-year sales volume for the three will be near $300 million, according to Headset.

One unknown is the opening of the gargantuan recreational market in New York.

Regulatory delays in New York could push the opening of sales in what’s expected to be a $1.2 billion market beyond 2022.

The potential exists that unknown markets could open as state lawmakers around the U.S. debate legalizing adult-use or medical marijuana markets.

With such possible expansion in mind, Headset projects that annual marijuana sales growth in the United States will continue to increase.

Flower will continue to dominate retail marijuana sales in the U.S market going into 2022 and remain the primary growth driver.

But fluctuations should be expected.

“In maturing markets – before we get the big influx of new states – the flower category tends to lose some popularity to the other two inhalable categories (vape pens and pre-rolls),” Headset’s principal data analyst, Sami Toivola, told MJBizDaily.

“New states are expected to reverse this, as flower is typically the most popular category out of the gate.”

Toivola also believes new markets might impact the market share of concentrates sales since those products typically have lower sales at first.

“Concentrates are growing at a healthy middle-of-the-pack rate,” Toivola said, “but vape pens, flower and pre-rolls are growing at even faster rates, which leads to the (potential) relative decline in concentrates’ share.”

This is Headset’s first quarterly update of its comprehensive forecasts, which the data firm launched earlier this year.