(Note: This story has been updated from an earlier version.)

Massachusetts lawmakers table negotiations on the state’s recreational marijuana law, Denver finalizes rules for social cannabis use, and West Virginia creates an advisory board to help plan its MMJ industry.

So close, yet so far

In the annals of Massachusetts marijuana legalization, this week will be remembered as an excruciating episode of Mass delays.

ADVERTISEMENT
The six state lawmakers – three each from the Senate and House – who comprise the committee tasked with melding two vastly different legalization bills were tantalizingly close to finalizing a recreational cannabis law. But then they missed a self-imposed June 30 deadline.

Adam Fine – managing partner of the Boston office of cannabis-focused law firm Vicente Sederberg – estimates another half-day of negotiations would have produced a compromise bill. So, observers were hopeful the six conferees would be able to iron out a bill not long after returning from their July Fourth holiday.

But House Speaker Robert DeLeo then unilaterally suspended the marijuana bill negotiations, saying they had become a distraction to the more important – and complicated – effort of producing a compromise budget bill.

Observers figured, at best, lawmakers would hammer out a budget compromise by next week, and at worst, closer to the end of the month. That meant the rec cannabis negotiations would have been on hold at least that long.

But as of Friday morning, lawmakers had reached a budget deal and are expected to send it to the governor’s desk soon.

Assuming lawmakers don’t find another reason to delay, here are the biggest sticking points in the adult-use talks.

Negotiators aren’t “that far apart” on taxes, said Fine, who is closely monitoring the process. He’s been told the sides are only a few percentage points apart on the tax issue.

The negotiators are farthest apart on who can ban or allow rec marijuana businesses, Fine said.

The House bill would give local governments unilateral power to decide whether to allow adult-use businesses.

Under the Senate proposal – which is very similar to the voter-approved measure – residents would have a say through referendums in whether their municipalities could ban or allow marijuana businesses. That system works, said Fine, who noted that scores of Massachusetts towns have already held referendums in which voters banned rec businesses.

If lawmakers can’t compromise, it’ll be up to the governor to release funds to implement the voter-backed measure.

“I’m not overly concerned,” Fine said. “I think they’re going to work it out.”

Denver has released regulations for social cannabis use, but it’s still unclear whether business owners will benefit from public consumption because of highly restrictive rules that include prohibitive zoning requirements and high compliance costs.

If the city loosens the restrictions, “the impact could be significant,” he added. “Obviously, everybody’s able to buy cannabis in Denver, but there’s so many people without a safe place to consume.”

Under the new zoning restrictions – they include 1,000-foot setbacks from child-care businesses, drug and alcohol facilities and city-owned recreation centers and pools – a business vying for a social-use permit would find it highly difficult to find a suitable location that isn’t on the outskirts of Denver.

But in the unlikely event a social-use permit was granted to a marijuana consumption business near a retail cannabis store, Zucker said, the two companies could potentially partner “to do things that can really lift up your brand.”

“We’ll still see some people try to make that happen,” he added, “but given the intense regulation, I wouldn’t have a lot of confidence.”

It was a big week for West Virginia’s medical marijuana program, with the state’s MMJ law taking effect July 5 and regulators appointing a 12-person advisory board.

Now the state can start developing the MMJ program and honing regulations.

“It seems to be going fine,” said Keith McMillion, founder and president of the Alternative Economic Development Association of West Virginia. “Nobody seems to be making it difficult to get the industry started.

“It looks like everybody’s on board to make it work,” added McMillion, who noted there are plans to have the program running by July 2019.

The state advisory panel – which includes doctors, pharmacists and law enforcement – is expected to hold its first meeting in late August, McMillion said.

A state attorney is currently drafting evaluation criteria for that meeting for the three types of business licenses – dispensary, cultivation and processing. The first round of applications could be released in the first quarter of 2018, according to McMillion.

Up for grabs will be 10 cultivation, 10 processing and 30 dispensary licenses.

Ancillary companies should be well-positioned to succeed, he added, including lighting companies and “everything else to run a processing facility and a grow.” 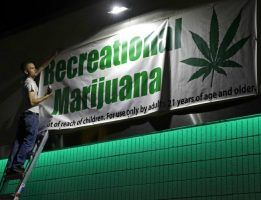 Chart: Fears may be overblown about impact of proposed tax hike on Massachusetts rec cannabis sales 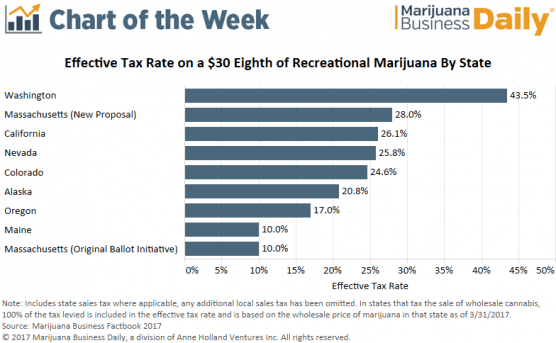